When people ask me what my 20-year-old daughter is currently doing, I tread carefully, weighing how much I can say and how I can say it.

Half the time they will look at me with pity, though every now and then it opens the door to an interesting conversation.

If they heard the truth, these type A's would really cringe and be horrified.

My daughter is actually doing nothing – nothing that societal norms determine is appropriate, that is, because she is living her life the way she wants to.

In this crazy, hyper-competitive world we live in, this is completely unacceptable to many. I, myself, have had to come to terms with it.

My daughter will never be one of those kids. You know, the ones who go to university, overachieve and then settle down.

She is a free spirit and plays by her own set of rules. She lives in a world that I am privileged to know through her. Actually, I wouldn't have any idea that this world existed if it wasn't for her.

She carefully feeds me small details of her life, and then six months to a year later, I read about it in the newspaper, usually identified as some new trend or movement that has arisen to challenge societal norms.

She exposes me to the alternative lifestyles that many don't even know exist, and the social movements that are shaping our world today and in the future. She is a trend setter rather than a trend follower, and is always ahead of the curve.

Recently, while I was shopping at a high-end store in Toronto, I came across a top that she would have fashioned herself 3 or 4 years ago. It was selling as cutting edge for close to $2,000!

I told her about it and she replied, "I would never want anyone to copy anything I wear."

Since she's been offered opportunities to design and create clothing, which she always turned down, I know that she is telling the truth. She says the thought of someone making money off her ideas is just plain exploitative, a slap in the face to all us ambitious baby boomers.

Once, on a trip overseas, I admired the dress my daughter was wearing.

"I got it out of the garbage," she told me, to my surprise, and revealed to me what many know about but don't mention – the used clothing movement.

Sometimes, when I am feeling daring, I wade gingerly into this subject with other people to see how they respond. Recently, while I was having a body scrub, I mentioned this type of recycling and the lady responded: "Oh, you mean dumpster diving. I know people who do that."

Or I will mention that my daughter is taking the train across Canada.

Those in the know will say – oh, you mean train hopping or riding the rails. And this will lead to a lively conversation. One woman even proceeded to tell me how this group of people repair their clothes with dental floss. That was something I already knew from my daughter's clothing.

Last summer, my daughter called me to tell me she was busking in Newfoundland.

People wonder how I can go for weeks without hearing from her. It has been this way since she was 16 and decided to live on the streets for the summer. She developed a desire for unusual experiences, and it took off from there.

Once, when my cousin asked me what she was doing, I told him.

Yes, I thought to myself, you can say that because it isn't your child who is testing all the boundaries.

For those willing to challenge conventions, it must be said, life is not exactly easy.

Every time I venture out with her offers me great learning opportunities about just how difficult it can be to follow one's truth.

Once, overhearing a woman at airport security state loudly enough for all to hear, "thank goodness I never had a child like that," allowed me to contemplate just how empty my life would have been without her.

Since children are in essence our greatest teachers, I would have never had the numerous lessons about how important it is to question what we, as a society, accept as normal. And I am so much better for it.

Every summer brings a new experience for her, and a new look. She is an ever changing, ever developing work of art in progress.

I have learned to look forward to hearing about her experiences and listening to her stories. She opens up a world that I would never have had the opportunity to see, and I appreciate that.

I may not be able to brag about her achievements at university or in the business world, but I can live vicariously through her life and be awakened to all its new experiences.

It is the gift that she gives to me. It may not be flowers or candies on my birthday, but it is her truth and her spirit, and that means more to me. 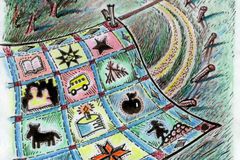