Harriet Millstone
Contributed to The Globe and Mail
Published August 6, 2013 Updated May 11, 2018

I have had my share of kisses. Mother kisses, boyfriend kisses, the kiss a toddler gives you by touching his lips to your cheek before he understands the pucker-and-smack part of it. The cocktail-party air kiss. More than 40 years of my husband's excellent kisses. But this is the story of my most memorable kiss – the lion's paw kiss.

Some years ago I was an HR manager at an agency that ran a residence for adults with developmental handicaps. The property consisted of four modest bungalows and a small office building around a grassy lawn in a Toronto suburb. I worked in the office building with three colleagues.

The residents, all in their 20s and 30s, were men and women with various degrees of mental and physical handicap, some non-verbal, some extremely verbal. With some, I was warned, it was best to maintain a safe distance unless I wanted to lose a handful of hair or be whacked by a gob of spit.

It was not unusual for the residents to visit the office building. Some were allowed to come by themselves, doing errands like delivering mail, but most came with their counsellors, who were picking up groceries from the main kitchen or delivering their pay sheets to my office.

One day when my colleagues were out at meetings, I had a visitor. Esther was a tall young woman with a slow, shuffling gait, short brown hair, pock-marked skin and downcast eyes. She was non-verbal. Not only had I never heard her speak – I had never heard her make a sound. Still, she was calm and non-threatening, so when she showed up I had no concern about seeing her other than the fact that she was alone.

The hallway was carpeted, so I didn't hear her coming down the hall. When I looked up from my work she was standing at my door.

"Hi, Esther," I said. "Are you here all alone?" No answer. Well, of course not. I tried again. "Is someone here with you?" No answer. "Do you need something?" She shuffled into my office and stood in front of my desk. She pointed to it.

"What? What is it you need?" I surveyed my desk top. She pointed in a vague sort of way. "This? Do you want this?" My pen. Nothing. "This?" The stapler. No. The tape dispenser? Paper? The magnetic little guy stuck to my desk light? No. No. No. She didn't seem too happy with any of my offerings.

Suddenly I understood. I'd had it all wrong. She wasn't pointing at anything, she was showing me her finger. She wanted me to look at it. I took her finger in my hand and peered at it. And there was the problem. Have you ever torn a hangnail, torn that little annoyingly loose piece of cuticle thinking you could just rid yourself of it, and then realized too late that you've torn it too far? It doesn't bleed, but for some reason that tiny torn piece of skin hurts out of all proportion. That's what she was showing me – a little red tear mark beside her fingernail.

Well, now what? How do you fix a torn hangnail? I had no idea, but I did know where the first-aid box was, and that seemed to offer a reasonable alternative to a real cure. Maybe there would be some soothing cream in there. I looked up at Esther. I took command of the situation.

"Come with me," I said, and she followed me down the hall to the kitchen, where the first-aid box was hung above the microwave. "Okay, let's see what's in here."

Esther waited patiently, quietly. Well, no soothing cream, just a couple of rolls of adhesive tape, a half dozen square packets of gauze, a few loose safety pins and one lone Band-Aid. I wasn't sure how a bandage could solve the problem, but since Esther was waiting for whatever medical magic I could generate, it would have to do. I tore down the side of the paper sleeve, pulled the tabs off the adhesive and wrapped the Band-Aid around the end of her finger. Then, for some reason unknown even to myself, I took her bandaged finger in the palm of my hand and squeezed it for a few seconds. I don't know why I did that, except that somewhere in my mind I thought that might make it feel better.

If you're waiting for a big dramatic end to this incident, I'm sorry to disappoint you. Esther's eyes did not light up, and she did not articulate her gratitude by crying: "Thank you, my dear friend! You're a wonderful human being!" She just stood there by the microwave with her bandaged finger till I said something like: "Well, there you go. You'd better go home now," and she left.

A week or more later, my colleagues and I decided to take our team meeting outdoors, to a picnic table in the shade of a huge oak tree on the lawn. I was enjoying the sun, really only half thinking about our agenda, half day-dreaming, when I saw Esther coming out of her house with her counsellor.

All of a sudden, Esther, the shuffling, silent woman with the hidden eyes, began loping in long steps across the lawn. She stopped short of our picnic table and stood for a long moment looking at the ground. Then she came around to my side and stood behind me.

She bent down and kissed my hair. I say my hair because the kiss was so gentle her lips barely grazed my head. There was silence around the table.

After a moment, my colleague said: "Wow, I've never seen her do that. I think she must like the way the sun is shining on your hair."

Facts & Arguments
Pleasures of the flesh, or why I love fresh tomatoes from the garden
May 11, 2018 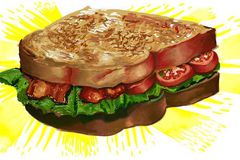 Facts & Arguments
Dementia will not make me a basket case. Here is my manifesto
May 11, 2018 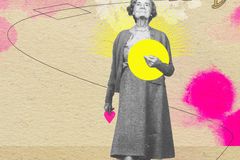