It started more out of laziness than any real intention. One October morning, after forgetting to shave for three days, I looked at my stubble in the mirror and thought: I could grow a beard.

I had toyed with the idea once, letting my stubble gather for a full five days before catching sight of my scruff in the mirror and shaving it off in a panic. But this time, I thought, I will persevere.

And persevere I did.

Now, the first thing you have to know about growing a beard is that there will be a point where you are in between an acceptable amount of stubble and something that is recognizable as a "beard."

This is the stage when people look at you funny on the street and either assume you have recently lost your job, or ask: Are you growing a beard? It's kind of like the man's version of the delicate question: So, when's the baby due?

Unfortunately, I'm told, some men never get past this stage. Their beard collects in fragments, a patchy quilt that never stitches itself together, leaving the beard-growing forever in a state of flux. This is no good.

I, however, with my Jewish heritage, didn't seem to have this problem. Within a week I had what was most definitely a beard on my face, which left me with other questions: When - and how - to sculpt?

The line shaved at the neck seems arbitrary, but must be attended to with utmost care. Too high and you run the risk of looking as if your beard is attempting to crawl over your chin and retreat up your face. Too low and you end up connecting your beard with your chest hair. Again, no good.

And then there is the length: How short? This is crucial to what your beard will communicate. Keeping it in a perpetual state of well-groomed stubble says "I enjoy martinis and fine cologne." A bit longer says "I listen to indie bands and drink Pabst." A bit longer still says "I seem to have lost the way back to my secluded forest cabin."

Find a length and line that works with you. Study those around you, talk to them about their choices. Take notes (although not publicly).

For example, I have chosen a line that ends just above my Adam's apple and a length somewhere between martini and Pabst - say, a $12 bottle of wine. This says I take my beard seriously, but not too seriously.

Growing a beard is like entering a club with lots of members all over the world. And you will start, as I have, to notice all the other members out there. It's like buying a red car and suddenly all you see are red cars. Men with beards are everywhere.

Sometimes I will nod to one as he walks by, and he will return the nod. What has passed between us I'm not sure. But it feels significant.

One thing I wasn't expecting about the beard was that it would become a conversation piece - not just for my friends and family, but for total strangers. "Nice beard," they say.

I have learned that answering, "Yeah, I wasn't sure what I thought at first, but it's kind of grown on me" is apparently only funny to me.

No other physical attribute of mine has garnered so much public attention. I have never been to a party and had the couple next to me turn and congratulate me on how robust and full my eyebrows are. Never walked down the street and had someone stop me to say my nose looked really great on me.

But growing some facial hair is a natural ice-breaker. Know this: If you grow it, they will come.

I'll readily admit I'm not the most masculine of men. Last winter, I got my mom to teach me how to knit. I frequently tear up during commercials for Tim Hortons. I watched the film He's Just Not That Into You - by myself. But it's amazing how letting your hair follicles hang out changes your perceived masculinity.

I feel like women flirt with me more now. I sometimes find myself swaggering as I walk down the street, although to outsiders I might just look drunk. One of my female friends exclaimed to me over a pitcher of beer: "I can't get over how straight you look!" Turns out a gay man's best beard might be, well, an actual beard.

When people ask why I grew it, I don't really know what to say. It wasn't to be ironic, or retro, or more masculine, or to get strangers to grab my arm on the street.

I joke that it was to keep me warm as I biked during the winter. It does act like a sort of furry windbreaker - albeit one that collects rain drops like leaves on trees.

But truthfully, I don't know why I looked in the mirror on that third day of stubble and chose to put down the razor. Regardless of intent, my beard has fast become a part of me. And when the days get longer and warmer, and the time to shave draws nigh, I don't know if I will have the heart to part with my newfound friend. 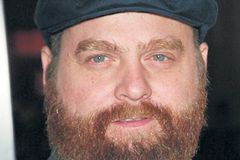