For all you fellow twentysomethings seeking "affordable housing" (like seeking a "vegan cheeseburger" that tastes like a cheeseburger), this tale of my quest is for you.

At the age of 19, I found the shock value of this story pretty cool. But the mound of deflated balloons we recovered over the course of that year rivalled the island of floating plastic in the Pacific Ocean; not to mention the quantities of desiccated cat food we found in various corners, and the pink and blue hair clogging the bathroom drains.

Our landlord, Bob, didn't care for the tenant in the apartment next to ours, who simply refused to pay his rent. Periodically, Bob would bang on our neighbour's door for up to an hour, demanding money, only to be ignored. After wondering for months why Bob didn't evict the man, we realized it might be related to Bob's vague description of his other "businesses" and his insistence on "cash-only" rent payments. Perhaps involving authorities would be more trouble than it was worth to Bob?

In our next place, we moved up a notch to the main-floor apartment in a run-down old house, but we never did meet our landlady, who told us she lived in Italy. To this day, I have no idea where she actually lived, or if she was in fact a woman or a man. We communicated only via e-mail. She informed us that another couple lived in the apartment upstairs. In fact, five young men lived there. When our hot-water tank broke, she refused to use the company we requested and instructed us to use "her guy." He charged the equivalent of a quarter tank of gas and, from what I could tell, hit the thing twice with a hammer and told us, "All good! Call if you smell anything strange or it makes scary sounds." Upon reflection, perhaps low-level toxic fumes were the reason we found it so hard to get up in the morning – or maybe not … 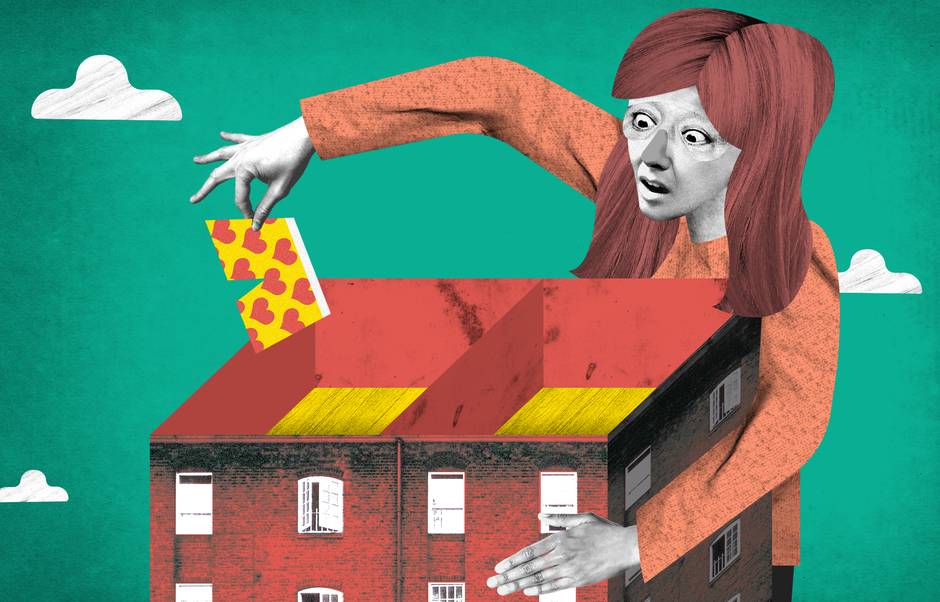 Nate Kitch for The Globe and Mail

When I broke up with my boyfriend a year later, I moved back to the West Coast and into my Vancouver “hobbit palace,” aptly named by a dear friend who saw me through those dark days. Being Vancouver, this borderline hovel of 215 square feet cost me $615 a month, but the place featured security and efficiency features: It had bars on the windows and I could reach the fridge door from my bed.

In the basement unit next to mine lived Tod, who was also a porn star. He was 6 foot 5 and had regular night visits from his lady-porn-star friends. My father and sister were helping me move in when Tod introduced himself warmly to my father, shaking his hand and assuring him he would keep an eye out for me. Good ol’ Tod. A few minutes later, as we were unpacking kitchen stuff, we heard animal moaning noises, and it was apparent to my sister and I that Tod had company. We made intense eye contact with one another when my father asked, “Is that a dog whimpering?” We chorused, “Maybe it’s time for a lunch break, let’s go!”

Five months into my year’s lease, the landlord informed me that city authorities were forcing him to remove my stove and kitchen sink as they were in violation of something or other. For the remainder of the year, I did my dishes in the bathtub and ate triple my body weight in instant noodles. The removals also left a small but horrifying peephole between Tod’s place and mine, so I could both hear and see his “sex-capades.” The day I moved out, Tod gave me his card and said: “If you’re ever interested in the film industry …” Thanks Tod, good to know there’s always a Plan B.

My second bachelor palace followed, in an old brick apartment block built in 1905 to house nurses. It featured a built-in trundle bed on antique wooden wheels and track that disappeared like shelving under the bookshelf. I woke up screaming the first night as it started to roll, and required wedges under the wheels to prevent my disappearing into a bookshelf coffin.

Not long after I moved in, I realized my neighbour across the hall, Marty, was dealing drugs. Most nights, somewhere in the wee hours, the door to the fire escape in the corridor would swing open, heavy feet would rush past my head (mere feet from my flimsy apartment door) and bang on Marty’s door demanding that he “open up!” Leaving the building one morning on my way to work, I saw Marty staggering toward me and realized we had never spoken. I attempted a neighbourly “Good morning.” Marty raised his face, revealing a black eye, bloody nose and lip, and grunted “Morning.” Later, I saw a sign pasted on the telephone pole outside our building that read, “Marty is a rat!” Our only other exchange was when he tried once to sell me a pair of stripper heels for $20. I think he was a softie deep down.

Still, without all my colourful, sketchy landlords, porn-star and drug-dealing neighbours, my living situations would make for seriously dry material. These “affordable digs” came with some solid character-building life lessons – or so I tell myself.