The Lady must have vanished, along with the servants, some time in the 1930s. That's when our house had been cut up and rearranged into a dark warren of mean little rooms for rent. We found her under the drywall, on the original plaster of what was once the servants' passage, her wide headband angled low, hair in kiss curls, eyes glancing sideways, a Cupid-bow mouth and silky open-necked blouse: a delicate pencil drawing of a flapper.

When The Lady, as we named her, magically reappeared almost 100 years after she was buried in the wall, we felt our late-Victorian house was signalling that it trusted us with its future by revealing the secrets of its past.

Before our home in Toronto's leafy Annex neighbourhood had electricity or indoor plumbing, maids would slip silent and unseen through the long corridor that ran between the kitchen at the back and the formal rooms at the front. Graffiti also turned up among the remnants of the call bells, so it looks as if the servants, including the one who drew The Lady, were routinely writing on the walls while waiting for the upstairs people to ring.

We've lived in the house for more than 20 years now, imprinting our lives on its fabric while trying to restore its integrity. Our children were in preschool when we moved in, and as they grew up the house generously adapted. In the course of our renovations we recovered traces of other lives: the outline of the original steep, narrow servants' back staircase; a remnant of cabbage-rose wallpaper from the formal dining room of the 1890s; the art deco lantern lights in the front hall – which we'd thought were reproductions – turned out to be the real thing, installed when the house was first wired for electricity in the 1920s.

When The Lady surfaced, renovation and revelation entwined. I wondered who the artist was, where she came from and if she'd left other drawings as good as the one on our wall. My curiosity was more than just idle: Upstairs in my study, where the servants once lived, I was writing a biography of British author and teacher Eliza Fenwick (1760-1840), who was here in my neighbourhood before my street and its houses were constructed, drinking tea or dining at what was once the Baldwin Estate, now Spadina House.

As The Lady emerged from under the drywall, Eliza was emerging from unreferenced and unindexed library archives in Toronto, New York, London, Washington and Bridgetown, Barbados. 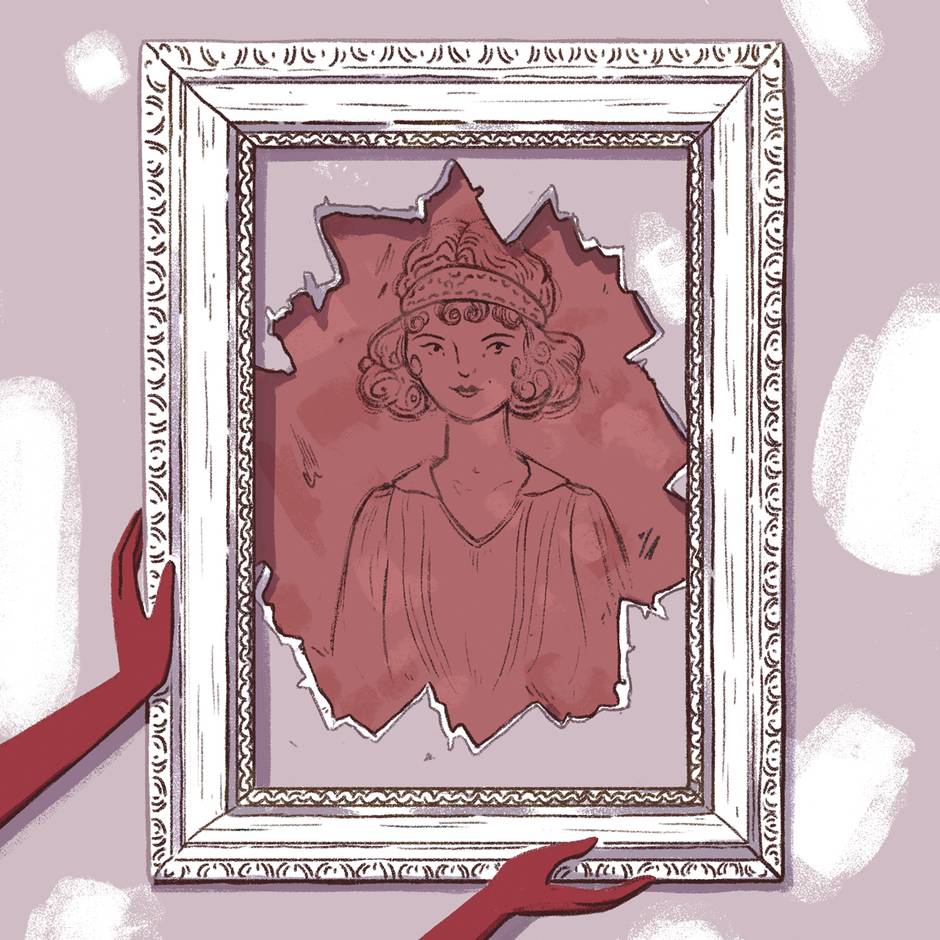 I have Eliza’s letters about life and teaching in Niagara and Toronto (as it became in 1834), as well as her published literary works – her 1795 novel Secresy and the children’s books she wrote in the early 1800s.

In marked contrast to the condescending accounts of life in Upper Canada written by her more famous contemporaries Susanna Moodie and Anna Jameson, Eliza wrote with consistent warmth and affection about the opportunities afforded to her. An immigration success story, Eliza was a single working mother, and later grandmother, whose networking, entrepreneurial and adaptation strategies enabled her to contribute to the social fabric of the community. Yet I cannot find a picture of her.

Recent debate in Canada about commemorating a woman of influence on banknotes got me thinking about how men are not only on the money, but also on other surfaces where women are missing. Men Eliza knew in the 1830s, William Warren Baldwin and Lieutenant Governor John Colborne, live with us every day in Toronto – we can walk up the Baldwin Steps to Casa Loma or along Colborne Street.

There is nothing that links us to Eliza or celebrates her accomplishments as she travelled (via Barbados and New York) from her early feminist literary life in London, where she knew Mary Wollstonecraft and Samuel Taylor Coleridge, into her role as a teacher and school owner in Canada. At the age of 70, she was still working as the much-loved mistress of the boys’ boarding house at the newly established Upper Canada College in Toronto.

We’ve had the portrait of The Lady restored and framed. She has the look of an accomplished fashion drawing, but without a date or signature we can’t do much more for the artist who made her.

Yet in bringing to the surface the portrait, hand-drawn by a long-dead artist, and the life, literature and letters of a longer-dead author, I feel akin to the archaeologists who found the marks and handprints of ancient people in the caves of Lascaux, France and Altamira, Spain, revealing, as a friend says, “the human touch upon the dark wall of history.”

I have an eerie sense that my hands are responsible for typing both Eliza, a story without a picture, and The Lady, a picture without a story, up from the dark walls of history into the light.

Our house, acknowledging its role in bringing both stories to the surface, seems to radiate optimism as a place where the degrees of separation between past, present and future shrink: a place where the lost and forgotten can be found, restored and remembered.

As our present turns into the past and recedes, our house looks forward to its survival in other futures.