Linda Gallant Potts
Contributed to The Globe and Mail
Published December 30, 2009 Updated May 9, 2018

No one is immune to the impact of a recession. The employed work twice as hard and worry about the cold edge of the axe. Morale is at an all-time low. Still, their angst pales beside the misery of people already without jobs, those who feel disenfranchised as they watch the parade go by without them.

I know, because my husband and I are living it, and have been on and off for nearly six years. We are at an age when some people, fully vested in the Freedom 55 mantra, are retired. It was our dream, too.

It's humiliating to admit that instead, at 59 and 58, my husband and I are desperate just to stay afloat. And we're not alone. There are tens of thousands of us. Some are under-educated, people who've learned on the fly, relying on instinct to get ahead. They are often the first targets for downsizing, forced to compete with younger, educated applicants in a tight job market. Pride keeps many from admitting they're in trouble. But I can't stay quiet any more.

This recession has hit us like a tsunami. Our lives will never be the same.

A former teacher, I left the profession in 1999 when my health took priority over my paycheque. We believed my husband's executive position, in a company providing software solutions to the automobile industry, was secure. We had savings, company pensions and equity in our home. With time to shop more wisely, we thought we'd barely notice less income.

In hindsight, I should have used the time to acquire new work skills. It is a huge regret that I did not. Instead, we fell into the traditional gender roles of our parents. I put my energy behind my husband's career and, in my spare time, indulged my passion to write.

Then, in late 2002, the foundation we'd based our future upon cracked. The job my husband had loved for so long, and the division he'd built from scratch, disappeared in restructuring and downsizing.

Not everyone springs into action when a downturn begins. We gritted our teeth and told ourselves it was temporary. Over the next four years, two more jobs followed, each separated by nearly a year of unemployment. Both companies met a similar fate, secondary casualties of the auto industry crisis. In between, he started a consulting business, but in a saturated market, work was scarce. Ironically, clients needing help the most couldn't afford it.

I applied for jobs too, but it soon became apparent that employers weren't eager to hire a middle-aged ex-teacher. Debts compounded at an alarming rate and our retirement savings began to disappear. Gradually, we readied our house for sale.

Other challenges surrounded us: a son at university in Windsor, Ont., a city so shell-shocked by the auto industry decline that part-time jobs were non-existent. The Canada Revenue Agency had us in its sights. Severance packages and irregular commissions skewed tax contributions. Suddenly, arrears became an issue, the monthly payment demands higher than my husband's Employment Insurance benefits. A sympathetic agency worker suggested we meet to discuss our situation, but nothing changed. They didn't budge one penny.

Since September, 2007, my husband has applied for as many as 10 jobs a week. His references are impeccable and his skills easily transfer to other industries. He has a résumé that plays down his accomplishments, one that's executive specific, one that's generic, one that shaves off the first 10 or 15 years of his work experience. In all that time, he's had less than a dozen interviews.

Friends have suggested he dye his hair to appear younger. Interviewers say he's "obviously an expert," that he's "better prepared than anyone else" and "definitely under consideration." But they also ask "how's your health?" and when he plans to retire. They've asked about past earnings, then said they pay much less. He tells them he'll work for that amount. Some say "you're overqualified for this job." He reassures them that he'll be happy with the position. Often, his hopes are dashed when he's told that a promising position has been put on hold. Even contract positions prove elusive.

His EI benefits ended in mid-2008. Our bank suggested credit-counselling as a beacon of hope in dealing with creditors. The counsellors glanced at the records I'd spent 10 hours gathering, then said we didn't qualify for help because of the equity in our home.

Today, we are barely treading water. We manage through pure stubbornness, the support of family, my small teacher's pension and my husband's seasonal soccer referee assignments and occasional renovation work. We spend hours online each week, searching and applying for jobs. We have gradually withdrawn most of his company pension.

We've survived the humiliation of the voluntary repossession of his car, only to learn that it was auctioned for half its value and the balance was due immediately. A hefty loan from my father's line of credit enabled us to negotiate payouts with most of our creditors. But these settlements proved as damaging to our credit record as defaulting.

Our home is on the market, but without employment, where do we go once it sells? Yes, many are suffering more than we are, but where are the employment initiatives to help people our age?

Daily, we remind each other that being forced out of our comfort zone might just lead us to a better place. What matters most is that we're a partnership, and I'm proud of that. We're not about to give up.

Facts & Arguments
I'm sandwiched between the stages of life
May 1, 2018 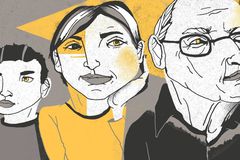 Facts & Arguments
I found my family in the classroom
May 1, 2018 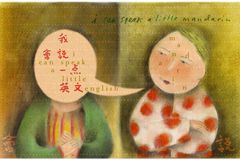