As I lay on my back, watching the elephant gallop away, a sense of calm enveloped me. Am I alive or already on the other side?

Life offers many unexpected twists and turns and I've had my share. My parents emigrated twice while I was in my teens, forcing me to learn new languages, make new friends, adapt to new cultures. The pattern was set. After graduating from university, I initiated several twists of my own.

At 32, I met a young doctor with a half-baked notion of helping Africa. I dropped my eight-year-old engineering career to join him, becoming executive director of the NGO Canadian Physicians for Aid and Relief. Over nine years, we set up and ran projects in Ethiopia and eight other countries, helping vulnerable people survive and, I think, live a better life.

Exhausted from trying to raise millions of dollars, and losing faith in the type of aid supported by big donors, I moved to the Middle East, mentoring not-for-profit organizations involved in peace and environmental issues. Then I returned to Toronto with a new plan: launching a for-profit business that would allow me to make a living, but also make a positive impact.

Thus was born Tour d'Afrique Ltd. - a company that organizes transcontinental tours while doing good in the process and raising money for charities. And thus did I find myself on our latest adventure, a 4,000-kilometre bicycle expedition from the Taj Mahal in Agra to the southernmost tip of India, Kanyakumari.

And thus did I get up close and personal with one irate Indian elephant.

We'd been on the road for almost two months, with only a few days left to the finish. Despite all the fears of naysayers, we'd had a most enjoyable journey. On Friday, March 11, the day the tragic tsunami hit Japan, I was in my customary position - sweeper - with all 35 cyclists way ahead of me and cycling at their own pace to our next destination, about 100 kilometres away. We were cycling in a forested area, though it was neither a national park nor a game reserve and there were no warnings to watch for wild animals.

About five kilometres into the ride, I was pedalling uphill when I spotted an elephant with a couple of teenage elephants in tow. They were crossing the road in front of another cyclist not too far ahead of me. For lovers of wildlife, this was a magical moment, and something I'd experienced before in Africa.

Suddenly, a car appeared, passed us and honked at the elephants. I kept on cycling, peering into the woods, hoping to spot the elephants one more time. Then, only about 20 or so metres to my left, I saw the elephant - charging full speed toward me.

My only option of escape was going back downhill to gather speed. But my quick turn was too drastic and I toppled over. With the elephant now only a few metres away from me, I got up, made a sharp turn and headed for the forest. That seemed to have worked for a second or two, as I heard the bicycle behind me being crushed. I tried another zigzag movement to the left, but my speed and manoeuvres were no match for the elephant. Using her trunk, she tripped me. In a feeble act of self-protection, I tried to curl into a fetal position. Next thing I heard was my helmet cracking from the impact of the elephant's foot, while my face was being ground into the soil.

Oddly, I felt nothing. There was no fear, just an acceptance of fate and how things happen in nature. Then, as suddenly as it started, it was over. The elephant had flipped me around and was galloping away toward her young ones.

I lay there in stillness, thinking my back must surely be broken. I tested my right foot to check if it could move. Surprisingly, it responded. I tried the other. It, too, complied. I tried bending my knees. All good! Could I lift my head? Success!

I was in the forest with little traffic on the adjacent road. I could be there for hours. I managed to pull myself up but noticed my left arm was hanging in an abnormal position and was no longer responding. I pulled it toward me. What now? Perhaps the other cyclist was still within hearing distance.

I yelled out - no response. I yelled a second time, louder. Nothing. I yelled as hard as I could manage. I heard a frightened response from not too far away.

Hours later in a private hospital in Mysore, an orthopedic surgeon explained the damage. "Arm broken in four places. Orbital fracture; the eye, though it looks bad, is fine. Ribs fractured. Lower back fractured. Bruises all over. But overall, though you are not looking too good, you are in fine shape. We will operate on the arm today and you will be out of here in no time."

I was in too much pain to celebrate, but celebrate I did. I had escaped with minimal damage and soon could return to my life in one piece. Why did I deserve this good fortune? I do not know.

Lying in a hospital bed gave me ample opportunity to think: Have I lived my life in the best possible way? Have I done well with the tools I have been given? Are there things I wanted to do that, for whatever reasons, I have not? And what now? What should I do with the rest of my life?

A month before the accident, a former colleague e-mailed me to suggest that it was time for retirement or at least a more traditional way of making a living. Perhaps it's time to sit back and watch the universe unfold. But I'm not sure. I have been given a great gift. Now, I must decide what to do with it. 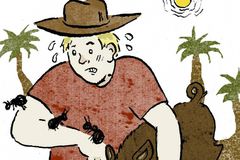