Recently, I r ealized my little habit of shopping for music online had gone from capricious to downright wanton. Seduced by the ability to banish whatever song was ringing through my head at 3:45 am, I was on the road to depredation and ruin.

The road to redemption (and no, not the redemption of music-store dollars sold on funky plastic cards by the cash register at my local drug mart) came innocuously enough.

One lazy afternoon, on a quest to buy yet another version of yet another 1970s salsa t une, I learned I had only 99 cents left on my tab.

This was potentially disastrous as my friendly virtual shopping outlet (also known as iTunes) was charging exactly 99 cents for the song in question. So, one of those little nagging questions that plague me from time to time started playing the congas in my brain: "Are the songs I download from iTunes taxable in Ontario?"

Usually when I get slapped across the face by this sort of query, I solve the problem in two minutes or less by firing up Google. Normally, when I plug in some query like "what was the name of the author who wrote that book I read ... um, was it six or seven years ago ... I know I was on the Sunnyside beach at the time ... and what was the name of the book, anyway?" the answer pops up almost immediately. Well, not this time.

The virtual meeting places that typically house useful information (Answers.com, WikiAnswers) were full of yeses, nos, maybes, arguments resulting from the yeses/nos/maybes, and diatribes along the lines of "why the BEEP should we have to pay BEEPING taxes on this stuff!! Sounds socialist to me!!!!!!!"

When I checked Ask Jeeves, I did find another name for those magical air songs that float into my mobile phone. They are apparently also known as "digital goods." I confirmed this on Wikipedia just to be sure.

Huge sigh of relief. At least knowing the legal term could be useful, right? Wrong. My glee had the lifespan of an ex-virgin male praying mantis.

When I typed "are digital goods taxable in Canada" into Google, the first link to pop up was to a paper about American Bar Association legal training. Although the piece did address Canadian jurisdictions, I suggest you save yourself some time and a raging headache by reading my somewhat pithier synopsis:

"Nobody really knows the answers to all this stuff yet, and about 347 variants on the issue are currently being litigated in the United States."

I should have seen that newsflash far sooner, really.

To be fair, I did glean this excerpt, and since I did manage to finish law school a long time ago, I thought I could make sense of it.

"None of the Provinces have defined digital goods as tangible personal property. Instead the supply of digital products may fall into one of three categories subject to GST: Intangible Personal Property (IPP), Service, or Telecommunications. To determine whether the supply of digital products is of IPP or Service, the Canada Customs and Revenue Agency (CCRA) looks at the agreement between the supplier and the customer to determine whether the substance of the purchase is for work (service) or property (intangible)…"

Yawn. The first person who tells me they read the whole section and understood it will get a $10 iTunes card from me.

But then I awoke from my research-induced snooze with a brainflash (not before time). Why not look on the Ontario Government webpages for a list of HST exemptions?

Within two minutes I was gazing upon a fact sheet directly on point. I could hear angels singing and harps playing, and I didn't even have my golden oldies playing!

But what goes up, as they say, must come down. The fact sheet contained approximately 697 items, including trampoline lessons, fishing licences and coffins. "Digital goods," though? Nope. The closest thing was "MP3 players." By this point, mine was almost ready to take a sail off the balcony.

The federal government Web pages were no more helpful. All I really knew was that my hairdresser, to whom I owed an imminent trip because by this point I had ripped out half my hair, would be collecting HST from me.

I even resorted to hitting my Caps Lock key and repeating all of the queries in upper case. Surely Google would recognize I was now YELLING and would stop playing games with me. Not surprisingly, this approach yielded no useful result.

But amid the storms of tears that followed, a ray of sunshine appeared. Why not just try to order my 99-cent song and see if my 99 cents on account would cover it?

My hands trembled so much, I had to try three times to order the song. Then …SUCCESS! Huzzah huzzah huzzah.

The moral of my little tale of woe: Perhaps I should go back to shopping at an actual store and pay actual cash to real people. The zero balance in my iTunes account heralds simpler days ahead. 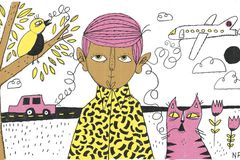 Facts & Arguments
The day I conducted the Vienna Philharmonic
March 5, 2012 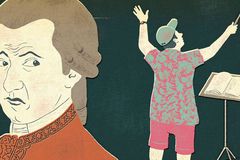