It's like a tired old circus act. A vehicle door slides open and people of all sizes trip and tumble out onto the pavement. One, two, three … until seven people have emerged from the sliding, folding, strapping innards of a modest automobile.

That's my automobile. And it's not jammed with circus folks - just my immediate family.

In a nation where fertility rates hover around 1.5 births for every woman, I find myself in the unlikely position of mothering five children, all boys, ages 2 to 13.

When my kids are grown, there will be five more paycheques in the Canadian economy to support the geriatric baby boomers. I like to think my reproductive efforts are good for the future of Canada. Most people are polite enough to agree.

What's harder to spin is the idea that, in spite of our minivan and our constantly flushing toilet, large family living is a kind of green living.

According to the 2006 census, the size of the average household in this country is 2.5 people. With a roster of seven people, our household is nearly the equivalent of three average Canadian homes.

However, when I look around our suburban cul-de-sac, it strikes me that even though our family is bigger than the others on the street, our ecological footprint is about the same. Our four-bedroom home isn't larger than our neighbours' homes, it's just more densely and efficiently inhabited.

For instance, instead of having the three refrigerators usually distributed between seven Canadians, we share one. That's a huge energy savings. The same could be said for the furnace, stove, hot water heater and the other appliances we split seven ways.

Thanks to recycling, our home has no more trash on the curb on garbage pickup days than the neighbouring houses. Maybe if we were a smaller household we wouldn't worry so much about tossing recyclable materials into the regular trash. It'd look like a much smaller drop in the environmental bucket - one that might be tempting to ignore.

Although my lifestyle requires complete immersion in childcare activities, I don't drive my big kids to and from three different schools twice each day. Even if I was inclined to drive them everywhere they went, there simply wouldn't be enough time to do it all.

Instead, we've joined society's oldest carpool: It's big, it's yellow, it reeks of "froot" snacks and potty mouth - it's the classic school bus.

Clearly, riding a school bus is not as convenient or comfortable for kids as door-to-door car service provided by harried loved ones. But it fosters a badly needed sense of positive collectivism. Bus riders learn to wait. They watch other people's needs being met before attention is turned to their own. Maybe the school bus is a noisy, chaotic lesson in the very green principle of delayed gratification.

Despite all these ecological necessities of large family life, the day we bought a minivan was a dark one for me. I wasn't one of those women who traded in her nimble little car on the way home from her first prenatal checkup. I clung to my teeny import car to a point beyond reason.

But I finally had to admit that a sedan was no longer feasible for our family when our fourth child arrived. I resisted, I denied, I pored over auto guides looking for any alternative. But the minivan was the best option. It was the only option. That's the mantra I repeat (sometimes a little sheepishly) as I drive it.

I'm learning to see our long, ugly vehicle in a more positive light. I've even convinced myself that our minivan actually bears a workload that might equal the work done by as many as three cars for seven other Canadians not living in large households.

It only takes one trip to the grocery store in our minivan to get all seven of us the food we need for a week. How many of the other vehicles in the parking lot serve that many people? Even without a dry, precise mathematical analysis, I'd still say with some confidence that, per capita, our minivan lifestyle has an environmentalism all its own.

Even though I'm one of them now, I understand how easy it can be to scowl up in judgment at drivers of large vehicles. Sometimes, I'll sit at a stoplight beside another minivan and wonder if the driver in the next lane would be able to produce a birth certificate to justify every last seat in her vehicle. I can do just that. Come on, ask me. I would be more than pleased with the chance to vindicate myself.

But don't judge and despise me as you zip around me in tiny cars. Instead, understand that my large family is just practising a different kind of environmentalism - one with an alternative but still green lifestyle. 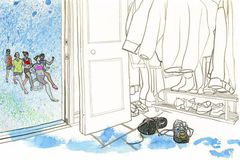