I love winter. I confess it's my favourite time of year. I love the extremes of the season, even though I know it seems like a contradiction for someone in my line of work. I am a street nurse, which means my job focuses on homeless people and their health. Winter is brutal and unforgiving for those without a home, and as we've learned over the years, homeless people can freeze to death.

Homeless people have taught me many tricks of the street-nursing trade, such as the patching qualities of duct tape and how to dress for the job. I have a wardrobe of yoga pants that I wear under rain pants and over long underwear (silk is best if you can afford it), along with fleece and merino wool tops and waterproof gear. I've learned how to layer to prevent dampness and stay healthy. I used to be teased by Marty, one of the residents of Toronto's Tent City waterfront encampment, because I was always chewing on vitamin C.

In my line of work, the weather keeps you busy, but what does a street nurse do when she's unemployed? Go on Employment Insurance, try not to feel discouraged and look for work. After all, homelessness is not disappearing.

So how could a street nurse be unemployed then, you ask? I ask myself that, too. After 22 years of street nursing that included work on declaring homelessness a national disaster, fighting for improved shelter conditions and witnessing the return of tuberculosis and bedbugs, unemployment happened to me. I had just completed a generous and twice-extended social-justice fellowship when I found myself in the grim situation of looking for work in a recession. Even though homelessness was increasing, the job market for street nursing was not.

I carried on as the voluntary executive director of the Toronto Disaster Relief Committee and watched that organization succumb to the recession. Unable to afford staff or rent any longer, I donated our office furniture and supplies to other needy organizations, packed 12 years of advocacy work, and tearfully but proudly watched our files and film footage be trucked off to the City of Toronto Archives.

I am thankful that many homeless people stayed in touch with me throughout this time. Some simply needed a friendly visit while hospitalized; others were in crisis and needed help to access food, clothing and shelter.

There was always something to do, including work on the ever-growing bedbug issue, advocacy for the constitutional Charter challenge on the right to housing and finishing a documentary film on homeless families with children. Knowing that housing is the primary solution to homelessness, I remained on the board of St. Clare's, a non-profit housing organization.

At one point, I even decided to apply to the citizens of Ontario for a job. I spent 24 days knocking on thousands of doors in a provincial by-election in Toronto. I lost.

But what did I really do? I did what my best girlfriend and fashion mentor told me not to do: I lived the year out in my yoga pants. She didn't want me to feel demoralized, but pulling them on every day helped me de-stress.

I wore my yoga pants everywhere. I wore them while giving speeches and to appointments with my dentist, doctor, even lawyer. Naturally, I wore them to the gym. I only set them aside once to dress up to receive an honorary doctorate from York University to honour my career. My acceptance speech, meant to motivate nursing graduates, included an anecdote about Alice in Wonderland, who finds herself down the dark rabbit hole. The story was meant to remind them that no matter how bad things get in the profession, no matter how daunting the circumstances are, it is possible to overcome them with strength, passion and determination.

I seemed to be down a rabbit hole, too, and I thought to myself, "What can you learn if you spend so much time in yoga pants?" A lot, as it turns out.

You learn to appreciate family members, like the aunt and uncle who took me to the Stratford Festival and an Elvis impersonator show.

You learn that many of those same friends are facing challenges of their own, from pension worries to health-care crises.

You also learn the real meaning of the term "social exclusion" when you're forced to turn down invitations to events such as fundraisers because you can't afford the ticket.

You are reminded in a visceral way, as you shop for bargains and notice the price of milk, what you already know in your head - that food is an expensive necessity for people who are on social assistance, unemployed or working at minimum wage.

I learned many priceless lessons during my year in yoga pants.

My favourite were while spending time with my two grandsons in their world of dinosaurs, blue whales, polar bears and superheroes. I have learned that being a grandmother is the best job in the world. My four-year-old grandson and I invented new yoga positions called "tiger" and "polar bear." I was wearing my yoga pants.

Cathy Crowe lives in Toronto and has joined the nursing faculty part-time at McMaster University.

Facts & Arguments
Lost on the wrong side of the tracks
January 27, 2011 Give the boot to yoga wear at home
November 15, 2008
Lululemon could become downward dog
January 5, 2011 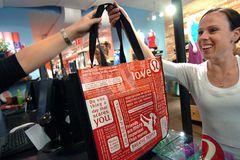