FRANCO CIGNELLI
Contributed to The Globe and Mail
Published September 30, 2013 Updated May 11, 2018

I have to admit that I am quite surprised by our recent sensitivity to bullying. Due to the all-too-frequent suicides of young people in the news these days, there is a level of attention that I wish had been paid when I was growing up in Brampton, Ont.

Like most children born in the Toronto suburbs during the 1970s, I was a first-generation Canadian. I was born in an Italian home. I was also gay.

By the time I had entered Grade 7, I was already isolated from my peers, who revelled in tormenting me. Being called a "faggot," a "girl" and "it" were daily occurrences that I couldn't escape. I spent my lunch hours alone at my desk, quietly eating the salami sandwich my mother haphazardly prepared for me each morning.

It was tough. Because I was gay and socially awkward, I felt for a long time that I had no value – that I was, as my classmates believed, worthless. There were no gay-straight alliances back then, and if you were openly gay you were a social pariah.

To top it off, I wasn't terribly attractive, or even that bright. I had no talents that set me apart from the other children in my grade. I was average.

I considered it a success if I was able to complete an entire school day without being shamed in front of my teachers or peers. Teachers often turned a blind eye when my classmates made homophobic remarks to me, and there was one teacher – Mr. Lee – who would join in on the fun.

Most days after school, I walked home alone, regardless of the weather. But on one particularly cold day, Mr. Lee drove up beside me and asked if I wanted a ride. When I agreed, and as my hand reached for the handle, he sped off, laughing from his car window. I realized that Mr. Lee was a bully, too, and continued home.

There was no one to report this incident to, and even if I had, I doubt that anything would have been done. He was an authority figure, and I was without much-needed support.

It was impossible for me to go home and confess to my parents what I was experiencing. They were more upset that I was unpopular than that I felt unsafe. To add to my troubles, my older siblings were going through their own personal problems, leaving me with no one to turn to for help.

My older brother was a typical bully. My parents had placed a lot of their hopes for a better life on him and, when he failed, their esteem for him dwindled. When he snapped, I became the focus of his rage.

Midway through high school, I found some friends who were on the fringe, like me. In Grades 12 and 13, I worked more than 40 hours a week as a produce clerk to pay for my first year of university. My father had made it clear that if I were to leave home and live on campus he would provide no financial assistance. I worked tooth and nail for my freedom.

Call me crazy to admit this, but my motivation in attending university was not academic, but freedom from the insanity that was my life. I was confused, and afraid to live on my own after such tight parental control, but those first lessons in independence were integral to my self-discovery.

I'm ashamed to say that there was one time in elementary school when I balked at the pressure of being bullied, and became a bully myself. It was Grade 8, and a new student had arrived. My classmates appeared disinterested and, because I was desperate for friends, I befriended him immediately.

I noticed that he was unpopular, and for the first time I wasn't the sole loser. In fact, I noticed that my peers started to ignore me so that they could taunt him full-time. At that point, being ignored felt like heaven to me.

But I was ambitious. I wanted to elevate my social status, and when one of the cool kids ordered me to tape a "reject" sign on our new classmate's back, I did it. It was a low moment, one that I have always regretted.

The boy did not return to school for more than a week, and when he did he never spoke to me again. I didn't blame him. I hated me, too.

The incident gave me insight into what it must be like to be a bully, and what I learned in the seconds after my treachery was just how deep my self-loathing ran.

As I have aged and found a career in public relations, I've been disappointed to observe that some of my colleagues have not progressed past their emotional immaturity. Sometimes, work seems like one big high school, with rampant gossip providing a break from the tedium of daily working life. To get through these moments, I remind myself that I don't have to be like them: I don't have to join their conversations to feel that I belong.

Through all my early childhood challenges, I did eventually learn to love myself. It took a long time, but now I know that I have value.

My worth is not dependent on my education or my employment or my sexual orientation, but on the love I choose to give.

Facts & Arguments
Why everyone and everything I see looks flat
May 11, 2018 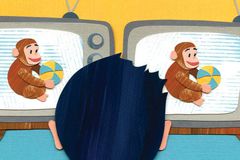 Facts & Arguments
An insect invasion helped me come to terms with Death and all his friends
May 11, 2018 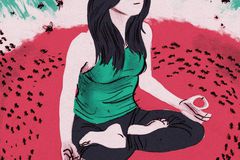