The Essay is a daily personal piece submitted by a reader. Have a story to tell? See our guidelines at tgam.ca/essayguide

I was midway through the semi-annual dusting of my embarrassingly large James Bond collection when it hit me: For the first time in my life, I'm actually older than 007.

I was born on Aug. 7, 1964, just five days before the death of Bond creator Ian Fleming – a date that has always seemed auspicious, given the life I've lived in Bond-age (call me a Leo with a double 0 rising).

But the fictional passport now carried by Daniel Craig's Bond matches the age of the actor himself – a mere 44, four years my junior.

Ever since my first brush with Bond, he has always been the older, suaver secret agent man I longed to be. For some, it was the Beatles; for others, it was Marilyn. For me, it has always been Bond, James Bond.

I can't remember a time when Bond wasn't part of my life. True, it was back in 1953 – around the time my parents started dating in high school – when he made his debut in the novel Casino Royale, and the first two movies had already been released before I was born.

But the yin and yang of the Cold War and Sean Connery's killer sex appeal had made 1962's Dr. No and 1963's From Russia With Love even bigger runaway global hits than Fleming himself ever envisioned. So with the whole world buzzing about the then-imminent release of Goldfinger (due just four months after my own debut in 1964), I was truly born on the cusp of the Bond Boom.

Now, I can't help but notice the striking similarity of the title of the newest Bond release – Skyfall – to my own name, Threlfall.

But I know I'm far from alone in my obsession with all things Bond right now. There's a new behind-the-scenes documentary, a touring exhibit about "Bond Style," a Blu-ray repackaging of the film series, and even a new cologne called, unsurprisingly, "007." (I would've gone with something more memorable, like Bond's original international nickname: "Mr. Kiss Kiss Bang Bang.")

It was the Bond Boom of the 1960s that laid the groundwork for modern marketing juggernauts like Star Wars and Harry Potter, for which the merchandise is as important as the original movies. In case you think I'm exaggerating, let me just quote from the 1963 From Russia With Love magazine ad hanging in my collection, which notes – in particularly large, black-and-red lettering bigger than the title of the movie – "69,000,000 James Bond Fans Live In A Throbbing World Of Hot-blooded Excitement!"

I clearly remember my own first date with 007. I was 7, and my father let me stay up to watch From Russia With Love on TV.

"Which one's James Bond?" I asked as the movie started. Dad pointed out Sean Connery in his tux, shushed me, and I was hooked.

Later that week, I spent my allowance on my first Bond toy – the famed Aston Martin DB5. Even though I had yet to see the car in action in Goldfinger, I recall choosing the DB5 over a Batmobile. Even Batman couldn't beat the inherent cool of a functioning ejector seat.

That was just the first of about 600 bits of Bond I've spent the past 41 years gathering – a collection of Q-worthy toys, games, records, watches, lighters, action figures, books, posters, dishes, stamps, cosmetics, gum cards and various other 00-oddities I now diligently dust twice a year.

Much like the series itself, my collection reflects the highs (Music to Read James Bond By on vintage vinyl) and lows (cheap plastic For Your Eyes Only sunglasses) of 007's many incarnations. Some is thematically grouped – a series of early book covers and comic strips showcasing artistic visions of a pre-Connery Bond – while other pieces kaleidoscope around on a repurposed spinning toy rack.

Only one piece was ever purchased on eBay: a tacky Timothy Dalton doll that made me realize the difference between true collecting and mere online shopping. The unexpected gems are my real favourites: a Bondian Popular Mechanics issue, a book of children's letters titled Dear 007.

But honestly, I don't know what my parents were thinking. Now that I'm a father myself, I would never allow my own son to collect, cherish and canonize the type of lethal bric-a-brac associated with a misogynist royalist assassin with a drinking problem, incipient lung cancer and a penchant for casual, often lethal, sex.

True, there is a legitimate case to be made for placing Bond into a British literary legacy that includes the likes of Sherlock Holmes, Tarzan, Allan Quatermain and George Smiley (not to mention contemporary pop-cultural offspring like Doctor Who), but Bond has never been about legitimization. He has always been about looking cool, and having a really great theme song.

Despite the handicap of having grown up in the Roger Moore era ("Oh James, lift your eyebrow again!"), I've now attended first-day screenings of every Bond film since 1974's The Man With the Golden Gun , and I'll be there for Skyfall as well.

And while I won't be taking my own son – who is also now 7 – we did celebrate Father's Day this year by watching his own first Bond film, Die Another Day , starring the invisible Aston Martin, which is way cooler than an ejector seat.

"Which one's James Bond?" he asked me as the movie started.

I pointed out Pierce Brosnan on our TV, shushed him, and watched as the next generation entered the Bond market.

I may now be older than Bond, but the excitement in my son's eyes proved that some franchises are forever.

Facts & Arguments
Throw out my Barbies? Not on your life
October 3, 2012 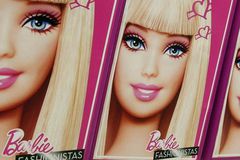 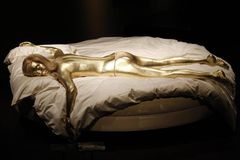