Recently, I started noticing that some of my personal items were going missing: a bottle of pink nail polish, a barrette with blue rhinestones meant for special occasions and my favourite lipstick.

My memory has never returned back to its original state since having children, a condition that my friends affectionately call "mommy brain." so I figured that these articles would eventually turn up. To my surprise they exposed themselves to me the other day, when I was picking up my daughter's toys, and ironically it was a Dora treasure chest that revealed all that had gone astray.

When I confronted my five-year-old kleptomaniac about how these items had become Dora's treasures, she casually replied that she was hanging on to them for safe keeping.

"They're for my collection," she said. "Remember when I asked you if I could have all your fancy shoes when I'm older?"

"Okay …" I replied with only slight recollection.

"Well, I figured, I'd keep these safe with me for now, too; for when you're old and won't need them any more."

Five years old and she's already staking out her inheritance.

There's a moral lesson about stealing in here somewhere. But the incident did get me thinking. What inheritance would be worthy enough to pass along to my daughter?

I know she is banking on my shoe collection being worth something, but the reality is that most of them are from a discount shoe store. She will be disappointed to find out they may not last until the time she's ready to inherit them. I want to pass along something that will last.

And immediately, I think of my mother.

As a child, I remember her as being a quiet woman, but it wasn't by nature. Growing up in South Vietnam, she had been forced to leave school at age 15 because her family was blacklisted. Her father was accused of being a spy for U.S. forces, a lie that crippled the family when North Vietnam took control of the south after the Americans withdrew in 1975. Her father was executed.

My mother's dreams of becoming an elementary-school teacher ended when she was forced into an arranged marriage and became the new housemaid for her husband's family.

Two and a half years after I was born, my family decided to leave Vietnam in the middle of the night on a small fishing boat. My mother was hidden at the bottom of the boat and suffered extreme sea sickness for seven days before we reached a UN-protected refugee processing centre in the Philippines. There, my family applied for refugee status and it was Canada that offered to take us in.

My mother soon faced new hardships in a country where the language and climate were foreign to her. It was strange for her to wake up in the dark those early winter mornings of her first year in Canada. Unable to drive or to afford public transit, she would walk about five kilometres to Sir Sanford Fleming College in Peterborough, Ont., to attend English-language classes.

"How can people live in such a place?" she used to mutter in Vietnamese under her breath.

She creatively mastered the art of layering for cold weather. To construct her own boots, she would wear three pairs of socks inside her running shoes. The final touch was two waterproof bread bags, which she stepped into and secured with an elastic band above her ankles.

Sometimes, hand in hand, she and I would slide down the icy bridge that led to my daycare, she in her makeshift boots. Then she would drop me off and head to her class.

We did this routine for months, until Christmas Day, when she received an unexpected visitor – her English teacher, Maggie.

Maggie was carrying a pair of slightly used winter boots from the local Salvation Army. My Canadian sponsors, Sheila and Gord Harris, were in the room, and Maggie explained to them that my mother would arrive at class, stamp off the snow and reveal her bread-bag-covered running shoes. She would undo the elastic band and lay them by the radiator so they would be dry by the end of class.

"Oh, my lord!" Sheila boomed, trying to contain her outburst. "You should have told me! Well, it's a good thing you have them now. You'll need them for the rest of the winter."

I never asked her for those first Canadian boots the way my daughter asked for my shoes. Maybe I should. To my amazement, they are still sitting in her closet.

They have lasted over the years and become a relic of a past filled with resilience.

They certainly aren't flashy enough to be noticed by my daughter now. But in time, I hope that they will be. And that then she will want to inherit them as well. 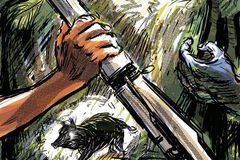 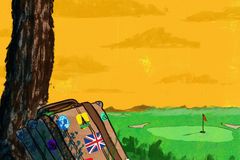