No meat? No fish? No cheese? No ice cream? What if you had chickens, would you eat the eggs? What if you were stranded on a desert island and all there was to eat was rabbits?

And so it goes, at many meals with friends, family or co-workers. These questions always come up, just as the arm connected to the inquiring mind is lifting a chicken nugget to the mouth. Not the best time for an ethical discussion on the matter. I don't intend to make anyone feel defensive or guilty or upset. I am simply living my life my way.

I first dabbled in a change in my eating patterns in 2007, having been a vegetarian for a few years. Full of big ideas and goals, I switched to a diet free of animal products. Like many people making the switch for the first time, I had absolutely no idea what I was doing.

My mom was the recipient of incessant phone calls: "What's in shortening?" I'd ask. "Can you make cake without eggs?" I had no idea what I was looking for on food labels. What's whey powder? What's a "modified milk ingredient"? What's casein?

Craving and exasperation crept in. It took only a month before I was in line at the grocery store with cheese, sour cream and those eerily neon-coloured cupcakes in my basket, the grand notion of living entirely free of animal products seemingly forgotten. I chowed down happily, ignoring the tiny voice that said "Is this right for me?"

Fluorescent frosting covering my fingers, I told myself that it was too hard, not worth it, it didn't make a difference anyway.

I am both my own antagonist and protagonist. It's as though there's a cheerleader in the back of my consciousness, always ready to make an argument for living life without thinking about consequences. "Just enjoy it," said my cheerleader. "Live congruously," said my conscience.

It wasn't until a year later that I made the firm decision about what food habits were right for me. It was a creamy cashew sauce that tipped the scales, and convinced me that vegan food could be delicious.

As for the term "vegan," I sometimes avoid the term in order to escape the stereotypes. I'm not an urban hipster, I don't have dreadlocks and I don't stand outside fur shops with a can of spray paint at the ready.

In actuality, I grew up on a small farm in rural Alberta. I dug in the garden, rode the tractor through the hayfield and milked the goats. I also butchered chickens. I made presentations about farm life to "city kids" on field trips, showing my Grade 4 peers where milk came from, how animals were dehorned and what the difference was between a sheep and a goat.

Despite my rural roots, however, I often had a niggling feeling about the impacts of my eating habits. Once I was no longer living on the farm, I was increasingly distanced from "real" food. Food seemed to grow on a shelf, not in the ground or in the barn.

I could see why those city kids had been confused as to how milk was different from pop. Food wasn't from the land any more. It was a product – decorated, packaged and marketed beyond recognition – masking its often dubious roots in industrial factories.

My purchases, it felt to me, were akin to my vote, essentially saying, "Yep! I think this is okay!" And that wasn't the truth. I didn't think it was okay.

But let's be honest. Veganism is not the answer to all the world's problems. And it does not imply ethical superiority over other thoughtful diets. It's not an insta-cure for environmental degradation.

Nor is a vegan diet necessarily more healthful (though the American Dietetic Association and Dietitians of Canada do say that appropriately planned vegan diets are nutritionally adequate and provide health benefits in the prevention of certain diseases). It's still possible to be a vegan and eat a diet of potato chips and cotton candy – and substituting ground flax and water for eggs makes it possible to prepare all of my family's favourite recipes for cakes, cookies, and waffles – not necessarily the leanest diet available.

I do believe that my vegan diet, when conscious and well-planned, is more healthful and more sustainable than the way I used to eat. Whether talking about ecological footprints, moral consistency, livestock well-being, water use, or vitamin intake, I see definite improvements.

But when my inquisitive dinner companions pose questions, my only answer is that we can each benefit from thinking about our food choices. Willful ignorance does not excuse moral responsibility. For most of us, eating is our main act of consumption.

Just the other day, my 12-year-old cousin was confused as to why I was wearing socks made from wool from my mom's sheep. "I thought you didn't like things that come from animals?" she asked, flummoxed. I had made a tradeoff in my own mind: They are treated like pets, and relieved to be rid of their warm coats every summer. I eventually replied, "Everyone has to make their own decisions about what they think is right."

We don't necessarily need to debate the extremes in lifestyle decisions. At the end of the day, each of us can make improvements on the margin, whether it be being a bit more virtuous, more kind, or more aware of the impacts of our choices.

For me, thoughtful veganism is the best approach to food. Not only does it help me to actively engage in the connection between food and the land on which it's grown, but it reminds me to be curious and ask questions about all my choices, food and otherwise. It's been an excellent exercise in training myself to think about the seemingly distant impacts of my actions.

And, as for the desert island ... I hear palm fruit is delicious. 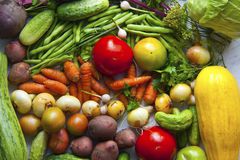