September is a month of wonder. The late-summer weather is pitch perfect and for me, a teacher, there is the cheerful anticipation of a promising new school year. But mostly I love September because it is the month when I get my sports-fan husband back.

Mid-September is the beginning of four blessed weeks of reprieve between the end of the professional tennis season and the start of the hockey year. So, once the trophies have been handed out at the U.S. Open, I put on a pretty dress, suck in my gut and celebrate because Federer, Nadal and Djokovic have moved out of my house. I get four weeks of my husband’s undivided attention – until the middle of October, when Carey Price and P.K. Subban move in and take over the TV, the couch and my man.

Ah yes, September means romance. We can watch obscure documentaries and foreign-language films and then have long discussions about their meaning late into the night. Or, if it’s a balmy evening, we can lounge in the backyard with a glass of wine and have a meandering conversation about nothing in particular or gently lament the end of summer as the sun sets early in a dramatic pink smear.

I know I should consider myself lucky: My sports-fan man is only obsessed with tennis and hockey. Compared to many, that’s reasonable. He does love the winter Olympics, but they are only every four years. Furthermore, I consider the Olympics a political investment because they dramatically, if ephemerally, boost his allegiance to Canada. This is generally tepid, given he is a nationalist Quebecker.

He can get kind of antsy about the Alouettes, although he recently gave me permission to drown him if he starts watching Canadian football. I hope the Alouettes will start to slump again so I don’t have to get my hands all wet and wrinkled. For the record, I don’t enter Super Bowl weekend in the same ledger of wifely resentment. Since he watches the game with his brother, the Super Bowl goes into the “family time’’ category, which in all fairness I don’t make a fuss about.

Yes, I should be grateful: He could be the kind of fan who only reads sports stats and never novels; the kind who has no interest in serious films or exciting music because his time is monopolized by curling, cricket, beach volleyball and table tennis from a thousand sports channels. He could be the sort who wears a different baseball hat to bed each night. He could neglect his hygiene. He could watch golf! 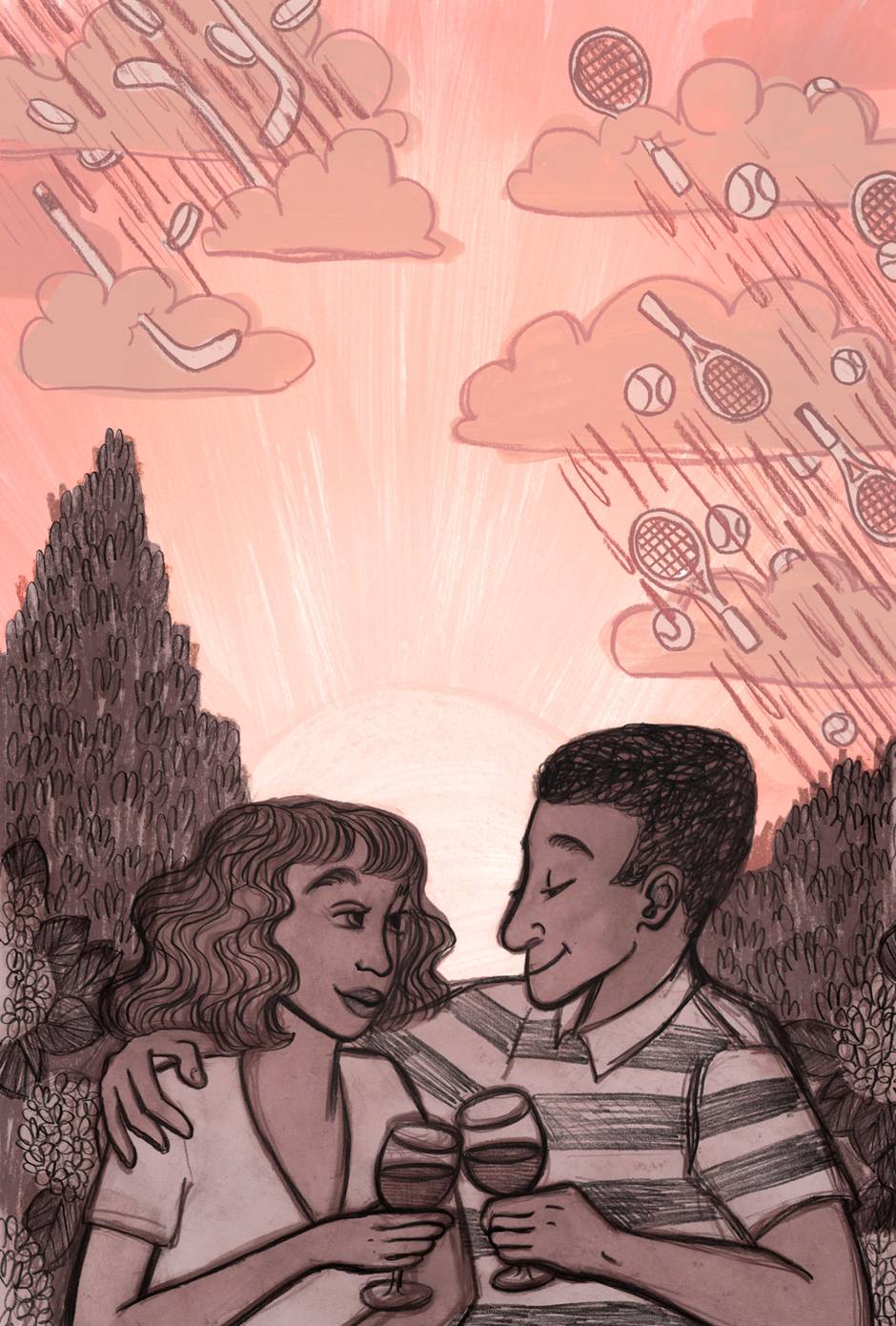 Lindsay Campbell for The Globe and Mail

A while back, our marriage was tested as a result of our divided cultural interests. For years, I had eaten up his beautiful lie that in certain lighting (i.e. darkness) I looked like actress Monica Bellucci, and then one day he told me that I reminded him of Bob Gainey. Bob as a standard of feminine beauty is, let’s face it, rather harsh. But when my husband saw my lower lip trembling at the seismic devastation to my ego, he quickly explained that he wasn’t talking about looks. No, it was that I lived life like Bob Gainey played hockey: genuinely committed to “fair play,” but if you messed with me I’d ram you hard and without hesitation into the boards. Or something sweet like that.

It is quite wonderful that my husband tolerates my sports atheism. In fact, I’m certain he prefers it this way because whenever I do watch a game – usually because I’ve forgotten to stand up and leave the room – I torture him with dumb questions. Why does Sharapova make so much noise? Is hockey violence ontologically necessary to the game? Are Price and Subban friends? Don’t you think professional athletes earn too much money, which would be better spent on documentary-film development? What’s the deal with the blue line again in tennis, I mean hockey?

There are a few downsides to the end of my husband’s sports season: The principal one is that if there’s no sports event there’s no reason to have junk food. This is the one part of the sports-fan ritual I do heartily approve of. I like to take a nonchalant detour into the room, look at the TV, pretend to care, and when no one’s looking, grab a fistful of Doritos.

It is rarely that my attention is captivated by sports, unless there’s some kind of human-interest or social-justice narrative: the hockey player who comes back after cancer treatment, the tennis player who assists the ball girl with sunstroke. And, of course, Alex Bilodeau with his brother. I love that stuff.

When writers compare Serena Williams to Mohammed Ali – in terms of her dominance and social significance as a black female athlete – my eyes light up. Oh, and I like those poker commercials with Rafael Nadal in the bathtub, but maybe that doesn’t count.

The truth is, when I am thinking fairly, à la Gainey, I accept that passions make people interesting. And even if I complain bitterly and make a lot of mean jokes, I kind of like and even respect my husband’s crazy enthusiasm. He’s a pretty even-tempered guy, so when he bellows in true primate fashion watching a Carey Price save or an airborne Roger Federer, I am moved by his intense emotions. But the game? Personally, I don’t give a hoot.