By now we know there’s little left on Kim Kardashian’s face that counts as God-given. Not even her cheekbones. In 2012, the reality star tweeted during and after pictures of herself as makeup artist Scott Barnes applied contouring makeup to her face, effectively creating the razor-sharp cheekbones and sculpted nose that contribute to her otherworldly (read: unattainable) beauty. And the public has been clamouring for contouring products, how-to’s and tips ever since. As it turns out, in this era of transparency, we’ve never been more covered up with bronzer and highlighter.

“Contouring is the top requested mini makeover at the Sephora Beauty Studio in our stores, one of the top trending topics on our beauty board and one of our most popular how-to videos on YouTube,” says Bridget Dolan, vice-president of Sephora’s Innovation Lab.

In response to this, the Sephora to Go app is testing a first-of-its-kind contouring platform in collaboration with virtual makeup tutorial Map My Beauty. Through the month of June, consumers can upload a selfie and receive step-by-step contouring instructions, including shoppable links, social media sharing capabilities and a detailed face chart that they can e-mail to themselves for future reference.

If it all sounds like a ploy to lure millennial shoppers, it is. Thanks to the rise of natural beauty selfie campaigns and the popularity of #wokeuplikethis, mastering the art of no-makeup makeup (a hot trend for spring and a look that, ironically, can involve a fair bit of contouring) has never been more in demand with this demographic.

“What most women don’t know is that Kim Kardashian is wearing an insane amount of makeup,” says Sheri Stroh, a Toronto-based makeup artist with Plutino Group. “I laugh when someone says, ‘I love her natural look.’” 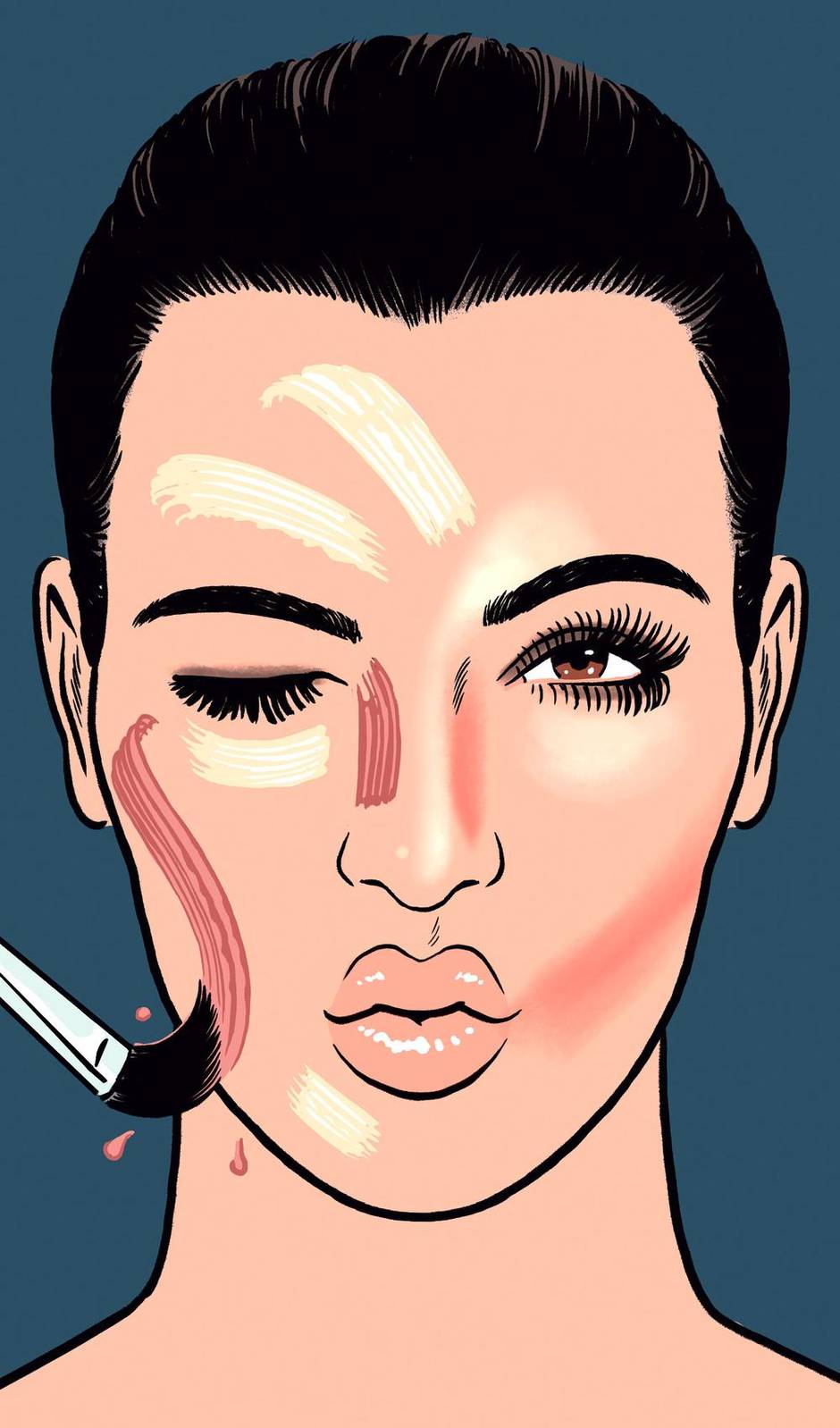 The three steps needed to achieve the Kim K. look: (1) Shimmery highlighter applied on the forehead, nose, cheekbones and chin makes skin gleam when the light hits it; (2) The combination of highlighter, applied down the centre, and contouring powder, lined on either side, slims the nose; (3) Dark contouring powder applied in the hollows of cheeks makes cheekbones pop. (Illustration by R. Kikuo Johnson) 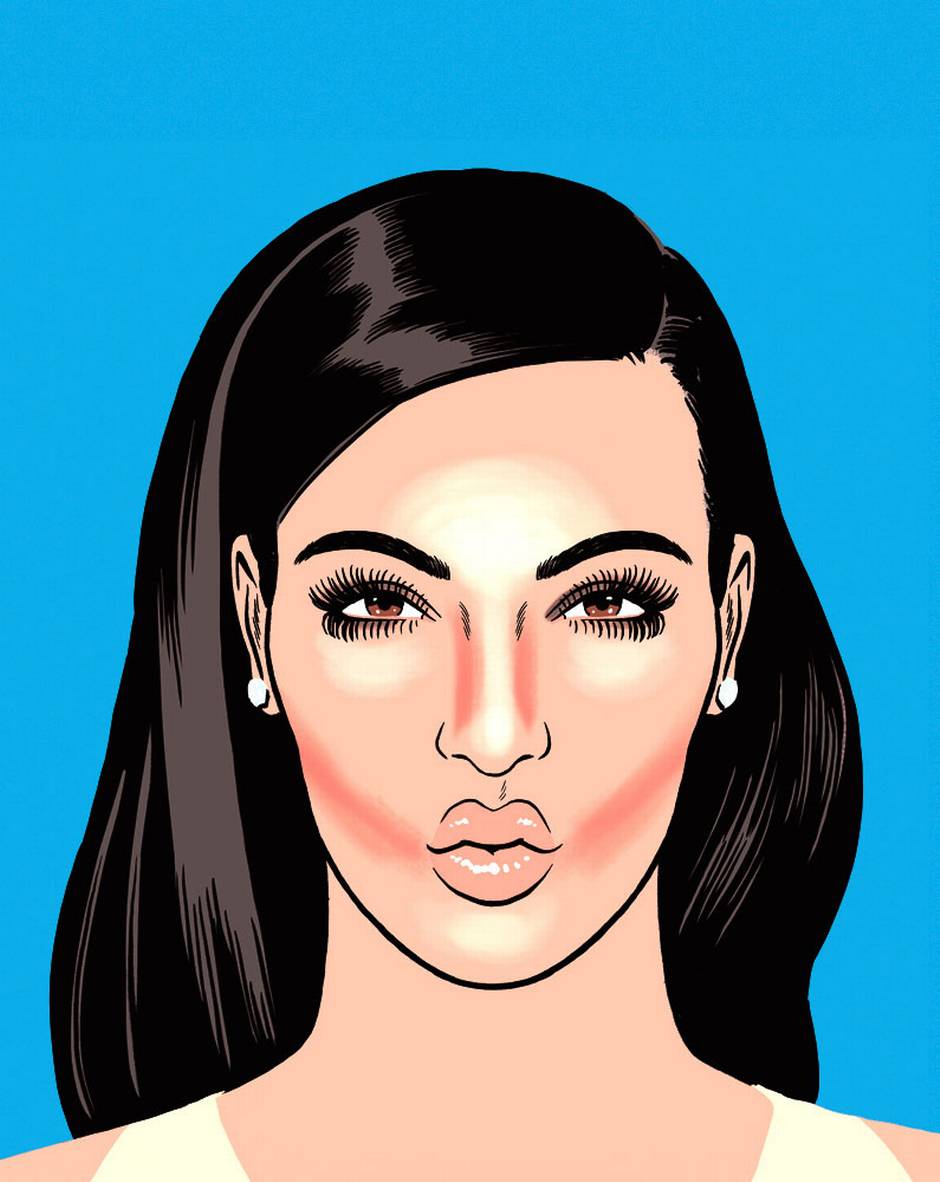 Annabella Daily, founder and CEO of Map My Beauty, recognizes the intimidation factor inherent to contouring and is attempting to bridge the gap through customization. “Contouring is one of the most challenging aspects to makeup, generally only best understood by makeup artists and professionals,” she says. “We wanted to be able to break down the complexities of it by helping consumers identify how and where to apply makeup based on their own face shape and features.”

Despite technology’s promises of DIY perfection, however, this might be one technique best left to the masters. “A lot of the time, people just look like they have a roadmap on their face,” Stroh says. “They have stripes on their cheeks, their noses look dirty, and they’ve used so much foundation and setting powder that they look like they’ve been moulded out of clay.” Even the perfectly sculpted Kardashian was recently snapped at Paris Fashion Week with a conspicuous brown stripe running down the side of her nose.

Before social media made contouring a trending topic – genetically blessed actress Kat Dennings recently sent out a plea for contouring lessons on Twitter – there were ethnic celebrities who relied on the sculpting and slimming effects of contouring techniques to help them adhere to the previously established social construct that “beautiful” equated to “white.”

“Contouring has been evident on ethnic celebrities for a very long time,” says Jacquie Hutchinson, Revlon Canada national trainer of product and application. “Oprah, Lil’ Kim and Jennifer Lopez have been doing it for years to sharpen their features and narrow their noses. Even Asians were taught to make their eyes appear rounder and less almond-shaped.”

Years ago, she says, the cosmetic industry adhered to such whitewashed beauty standards, espousing the ovalshaped face, a dainty nose and big eyes as the ideal. While an African-American woman or Latina with a round face – “fat face,” as the blogosphere is referring to it now, proving society still has a ways to go in social evolution – used the sculpting and highlighting techniques of contouring to slenderize her face and nose, today, Hutchinson says, Caucasians are using it to enhance and highlight what they naturally have.

Say what you will about contouring’s nasty past, but its next-level transformative effect is unparalleled in the world of makeup application. The seductive allure of a cat eye or red pout doesn’t hold a candle to the ability to transform a man into a woman – just ask anyone who’s dabbled in drag.

“Queens have been using these tricks from the very beginning,” he says. “Contouring allows you to remove the man and reveal the woman by changing the shape of your face, removing the male jawline and even toning down the Adam’s apple.” He uses M.A.C’s Studio Sculpt Powders and Studio Finish Concealers to achieve his transformation.

A quick glance at Philippines-based actor, TV host and makeup artist Paolo Ballesteros’s Instagram page is enough to prove how transformative contouring can really be. For the past year, he has been altering himself into a host of different celebrities ranging from Kylie Jenner to Cate Blanchett, Reese Witherspoon and even Michelle Obama. While the success of his work is bolstered by elaborate wigs and his innate ability to mimic each celebrity’s unique facial expressions, his contouring skills are what allow him to expertly jump from a baby-faced Ariana Grande to a late 1990s-era Cher – and to replicate starlets’ generous cleavage using just makeup. Ballesteros told the Huffington Post earlier this month that he learned to execute these expert transformations from watching YouTube videos (of course), proving that unless social media tires of the contouring trend, we will be submitted to striped and roadmapped faces for a long time to come.

Tracing the contours of a hot trend 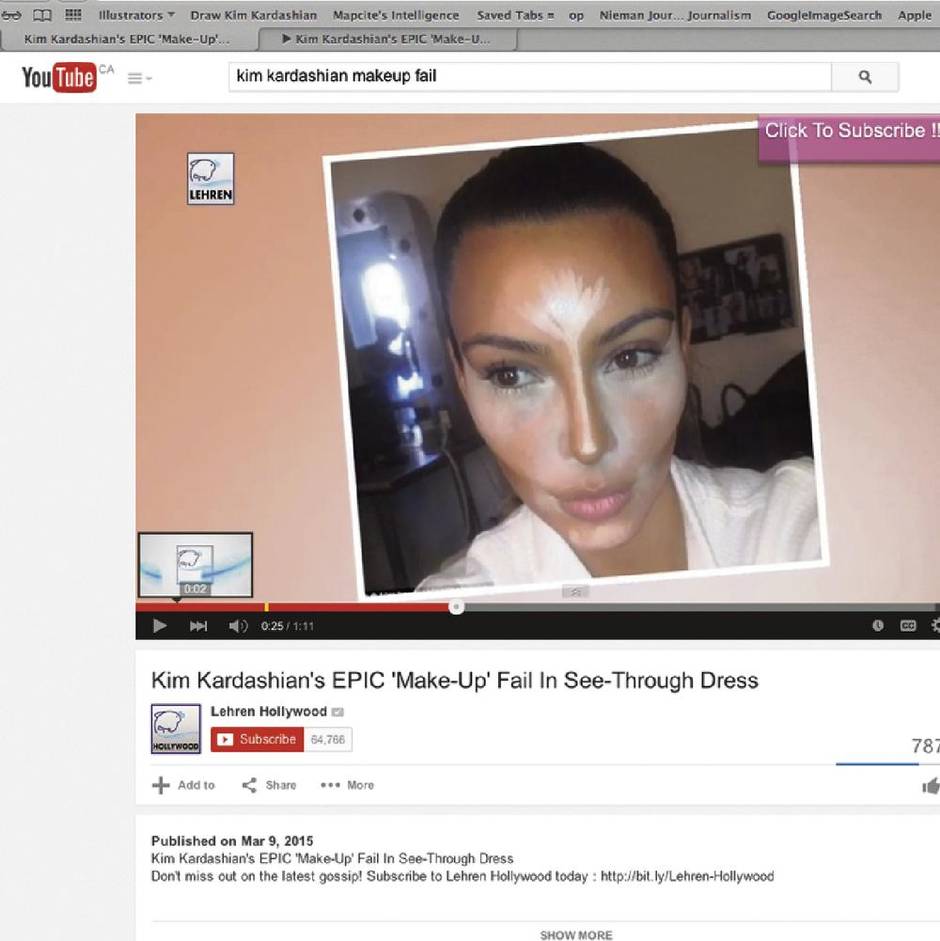 Though Kim Kardashian’s look above calls to mind the cast of Cats, the reality star in fact posted the selfie to show off the various layers of contouring makeup applied to her face before it is blended into luminous perfection 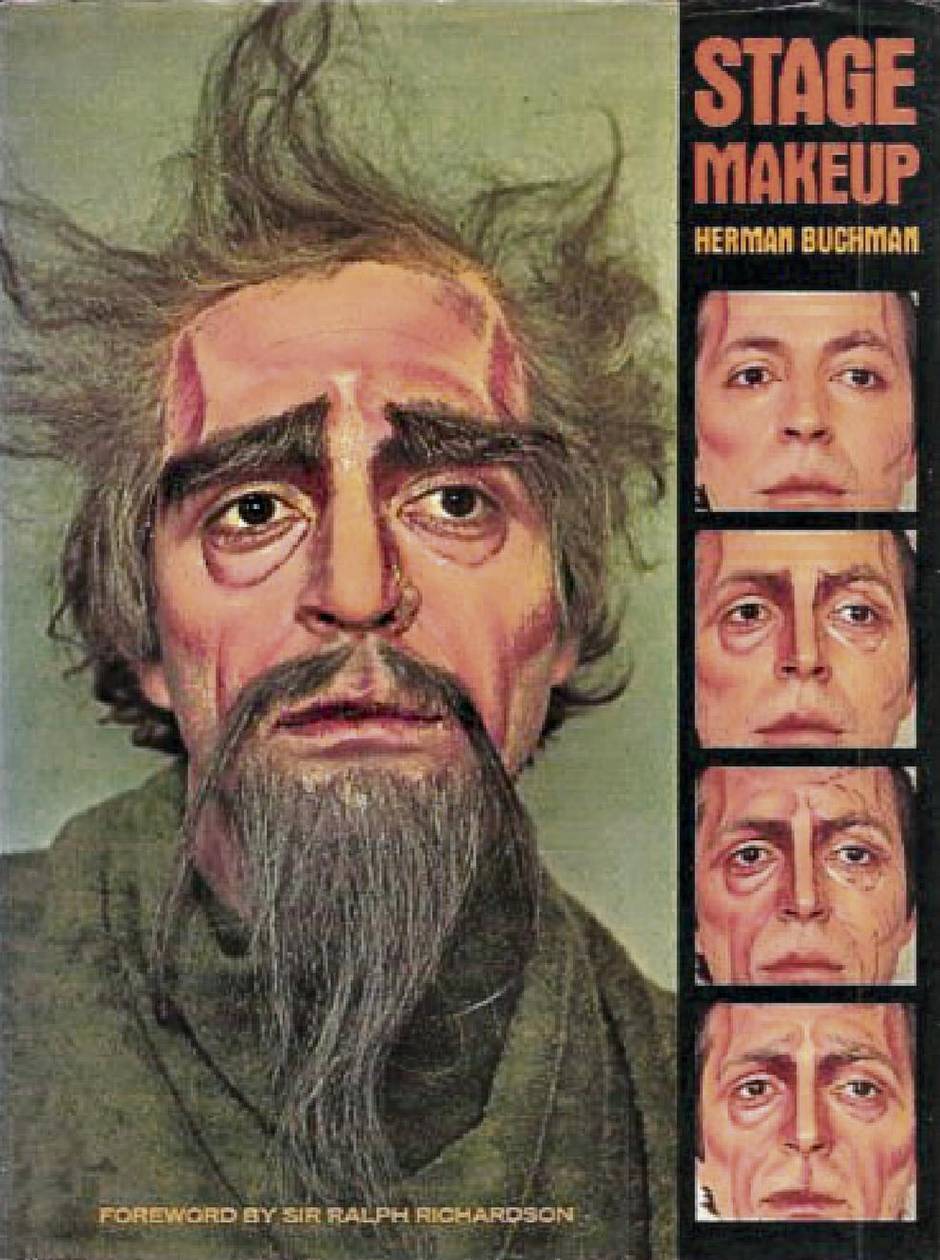 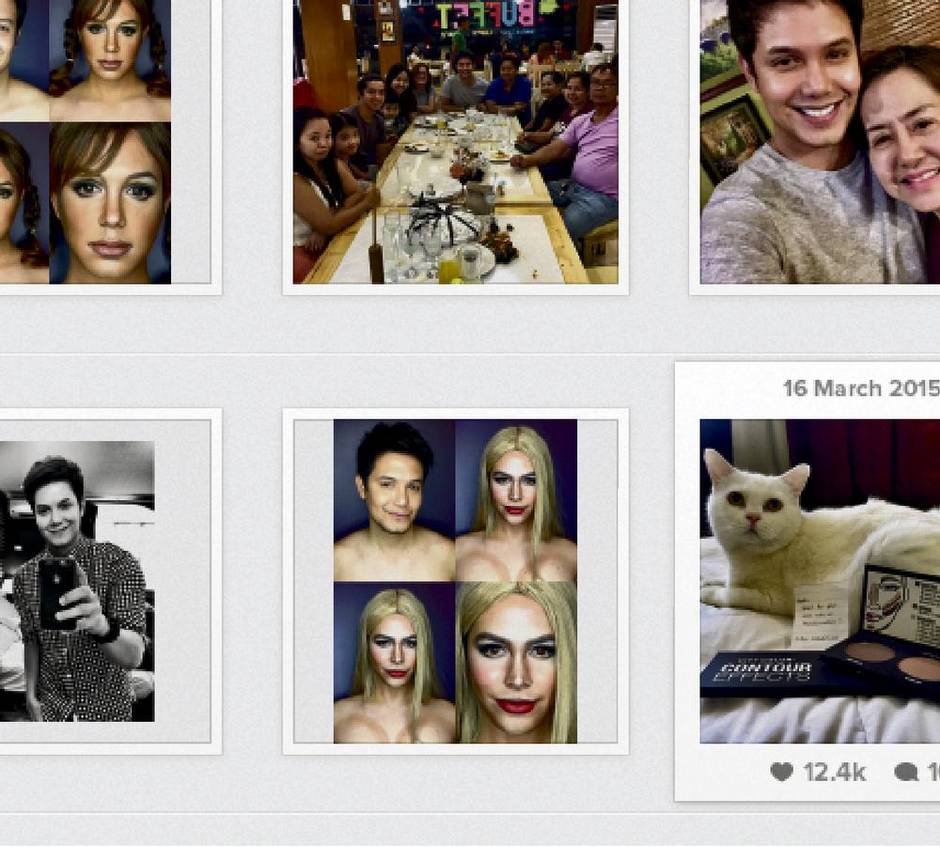 Filipino actor and TV host Paolo Ballesteros (@pochoy_29) uses contouring to transform himself into the likenesses of various female celebrities. Drag queens, in fact, have been relying on this technique for centuries. 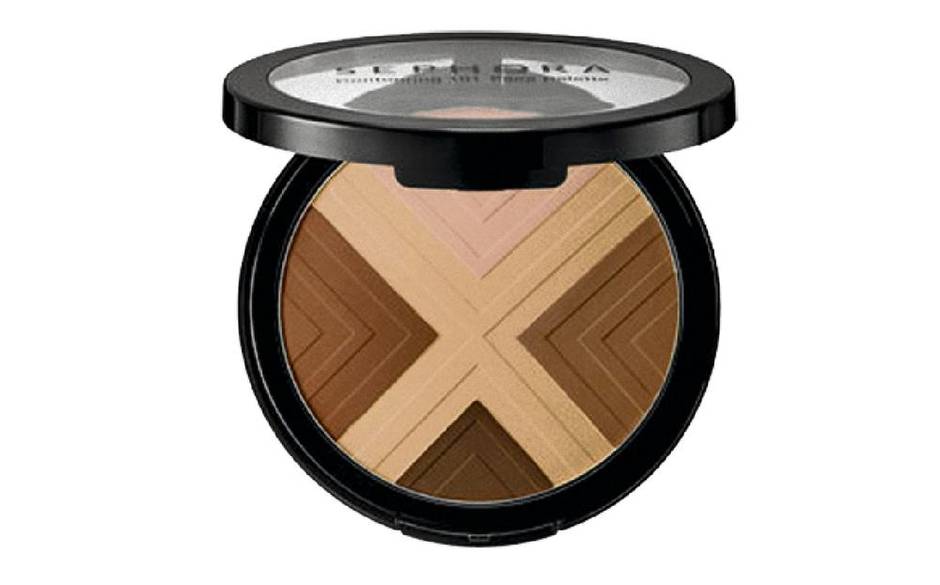 Retail beauty outlets like Sephora are cashing in on the contouring craze by offering special kits and how-to workshops. 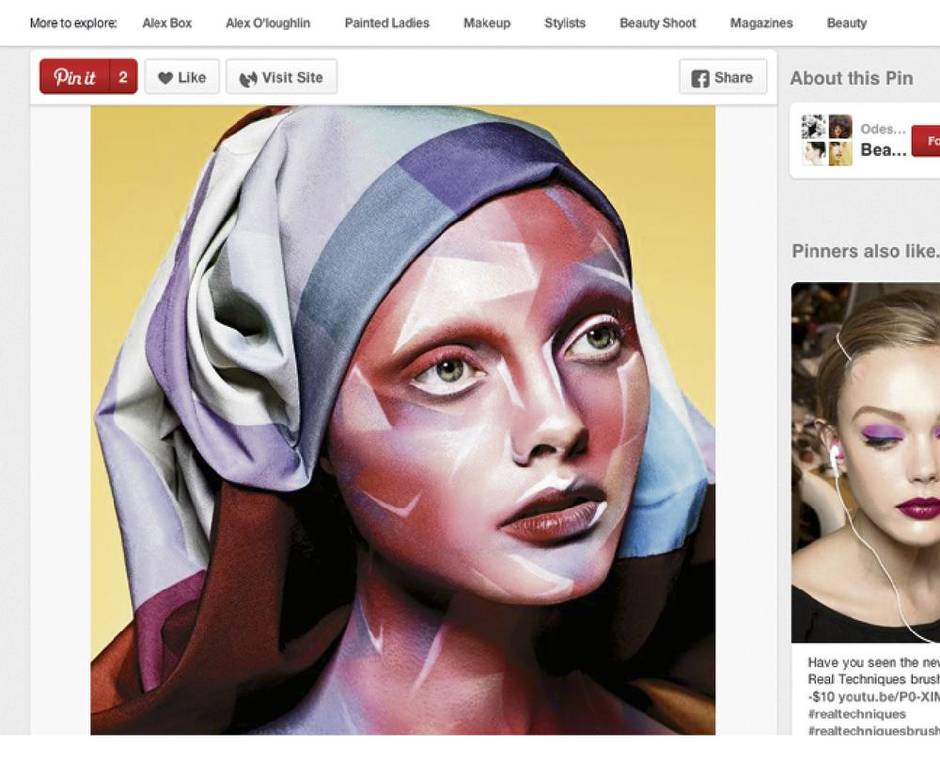