A new obsession over size is creeping into the consciousness of many women across Canada. Only this time, it has nothing to do with bra measurements.

Eyelashes, specifically, their thickness, fullness and length, have become one of the latest non-surgical cosmetic fixations - in the tradition of Botox, chemical peels and laser hair removal.

Evidence of the trend can be found at most drug stores and cosmetic counters, where tubes of technologically engineered mascara are sharing space with a growing number of lash-boosting serums, conditioning treatments and even an assortment of false eyelashes.

The fascination with eyelash-growth products was inspired, or at least made more fervent, by a prescription medication that promises longer, darker, fuller lashes. The product, named Latisse, was launched in Canada last month after receiving Health Canada approval, welcome news to consumers who have been calling spas and clinics for months to inquire about the treatment.

"I think it's going to be a huge seller," said Lori Martyn, medical director of Skin Vitality Medical Clinic, which has locations in the Greater Toronto Area and Kitchener, and has been authorized to prescribe Latisse. "I think people are looking for less expensive alternatives to actual surgery."

But the arrival of the first-ever prescription eyelash-growth treatment, and the non-prescription counterparts making similar lofty promises (without the medicinal might), also comes with renewed questions about the lengths women are prepared to go - and why - in the name of looking good.

"You've got to ask yourself what does it mean when we're taking serious medications and turning them into cosmetic ones," said Vivian Diller, a New York-based clinical psychologist and author of Face It: What Women Really Feel As Their Looks Change.

She added that Latisse is marketed to treat eyelash hypotrichosis, or an inadequate amount of lashes.

Many women have long been sold on the idea they need to have a certain cup size, complexion or figure to look attractive. Breast implants, face lifts or injections and liposuction represent some of the mainstays that help keep the world's multibillion-dollar cosmetic and beauty industry chugging along.

Inadequate eyelashes, however, are a new addition to the list of physical shortcomings women can pay to have augmented or fixed. Dr. Diller said this new product category addressing this "problem" makes her wonder what else might be on the horizon to correct minute physical imperfections.

Latisse is the offspring of Lumigan, a glaucoma medication that unexpectedly helped patients grow longer, darker, even fuller eyelashes. After realizing the commercial potential, Lumigan-maker Allergan Inc. developed Latisse, which is applied to the base of lashes using a small brush.

The product is now available in countries including the United States, Canada, India, Argentina and Chile, and global sales could exceed $500-million (U.S.) as the product is rolled out elsewhere, said Heather Katt, senior manager, corporate communications at California-based Allergan.

Latisse doesn't come cheap. One bottle of treatment, which lasts about a month, costs $150.

It's not without risks. The medication has been known to cause itchy, red eyes and even darkening of the skin around the eyes. In some cases, the medication could permanently darken an individual's eye colour, although that side effect is rare. Those potential hazards are the reason Latisse must be prescribed by a physician.

But Dr. Martyn fears once Latisse becomes widely available in spas and clinics across the country, it will be distributed to any customer who wants it, regardless of whether a doctor approves the prescription. In some cases, physicians who own spas or medical clinics may allow their staff to openly distribute the product, regardless of the company's emphasis on the need for consultation with a physician.

"It will happen. We see it still happening with Botox and injectables," she said. "That's my concern, that you're going to see a lot of handing off of that physician responsibility."

Rajiv Bindlish, an ophthalmologist and glaucoma specialist who operates in Oakville, Ont., said patients must be very careful to ensure they consult a doctor before using Latisse. "I don't think there's anything wrong with it [Latisse]as long as it doesn't have consequences for the eye," Dr. Bindlish said.

However, he added there is little known about the consequences of staying on the drug indefinitely.

"Over all, it's a relatively safe medication. But the problem with any medication is the longer you use it, we don't know what the long-term side effects are," Dr. Bindlish said.

Glaucoma patients who are prescribed Lumigan, which has the same active ingredient as its eyelash-enhancing relative, may stay on the drug for years, but without it, they could go blind, Dr. Bindlish said.

On the other hand, consumers who use Latisse to grow their eyelashes may be risking health consequences for the sake of beauty.

That's the dilemma some women face, according to Dr. Diller.

Although Dr. Diller doesn't vilify beauty treatments, she said the women who gravitate toward, and become reliant on, eyelash-growth medications and other cosmetic enhancers, tend to have low self-esteem. They are the ones at risk of obsessively using those products - and potentially paying the price in the long run.

"There's a sense of inadequacy or insecurity and the attempts to try to improve oneself feel addictive because you get an initial high," Dr. Diller said. "At what point are we going to say that our bodies change, and we can have them as they are?" 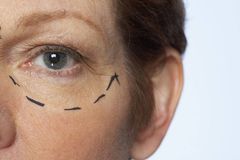 Teens undergo cosmetic surgery in record numbers
June 18, 2010
Follow Carly Weeks on Twitter @carlyweeks
Report an error Editorial code of conduct
Due to technical reasons, we have temporarily removed commenting from our articles. We hope to have this fixed soon. Thank you for your patience. If you are looking to give feedback on our new site, please send it along to feedback@globeandmail.com. If you want to write a letter to the editor, please forward to letters@globeandmail.com.
Comments