If you've got thin, Garbo-esque brows arching like willow branches over your eyes, then, sorry to say, you're as current as a silent-screen star.

Delevingne's atypically thick brows, incongruous in our overplucked world, have set her apart on international catwalks, where she first found fame as a Victoria's Secret model. She now has contracts galore (Delevingne is the new face of Topshop) and is at the fore a mini beauty revolution not seen since the prepubescent Brooke Shields first made bushy brows popular way back in the 1980s.

"It's a major beauty trend on the runways and is now making its way into the mainstream," says Canadian brow expert Sabrina Rinaldi, a spokeswoman for Tweezerman. "Many women are again embracing fuller, thicker brows. They instantly frame the face and draw attention to the eyes. "

Designer labels as diverse as Roberto Cavalli, Chanel, Prada and Alexander Wang have picked up on the Delevingue factor, presenting a bold, bushy brow as a key accessory for summer and beyond.

Beauty brands have followed suit with a huge assortment of products targeting brows to make them look bigger, wider and more dramatically defined than has recently been the trend. The result, according to a recent industry survey, is a brow-boosting business worth a whopping $57.6-million (U.S.). In the United Kingdom, where Delevingne's influence is especially strong, consumers have reportedly spent more than $13 million (U.S.) on eyebrow-related products between January and May this year, a growth of 53 per cent over the same period in 2013. Harper's Bazaar reports, meanwhile, that eyebrow surgeries, including technically tricky transplants, are also on the rise, prompted mostly by women clamouring to get the eyebrow of the moment after years of overzealous plucking has left them with ragged and thin brows.

The upshot? "Thicker brows make a woman look younger," says Hollywood's high priestess of eyebrows, Anastasia Soare, who has groomed the arches of Madonna, Oprah Winfrey, Naomi Campbell and Jennifer Lopez. "They give an instant facelift, if done right."

Recently in Toronto with her self-branded arsenal of brow-focused beauty products, among them Brow Wiz and the miraculous Clear Brow Gel, now available at Murale locations across Canada, Soare demonstrated how to get the perfect brow using just a brow pencil and a steady hand. She was trained as an artist in her native Romania, where, she says, "my teacher taught me how to change emotion on a portrait by just changing the eyebrow."

For those who aren't as sure-handed, Soare has created the brow stencil, a see-through bit of plastic with an array of ideal brow shapes cut into them. Just lay the stencil on your brow and trace, then shade in with a pencil or slanted brush dipped in the right coloured powder. Et voilà: brows befitting a supermodel.

At the Brow Studio in Calgary, where the women holding the tweezers were trained by Robyn Cosio, the New York brow expert who authored The Eyebrow, a history and how-to beauty book, in 2000, the goal these days is to encourage clients to grow back their own brows, even if it's one slow hair at a time.

"The Cara Delevingne look isn't for everybody," says Jillian Sayarh, one of the Brow Studio's on-staff experts. "But keeping the brow full is important. Instead of a one-look-suits-all approach, we work with the person's bone structure to create the best brow for their face shape."

In other words, Sayarh concludes, leave the plucking to the professionals and the perfect brow will follow.

How effective are lash-growth serums and are they safe to use?
August 15, 2014 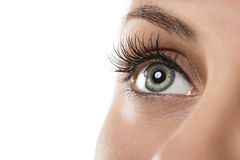 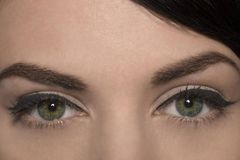