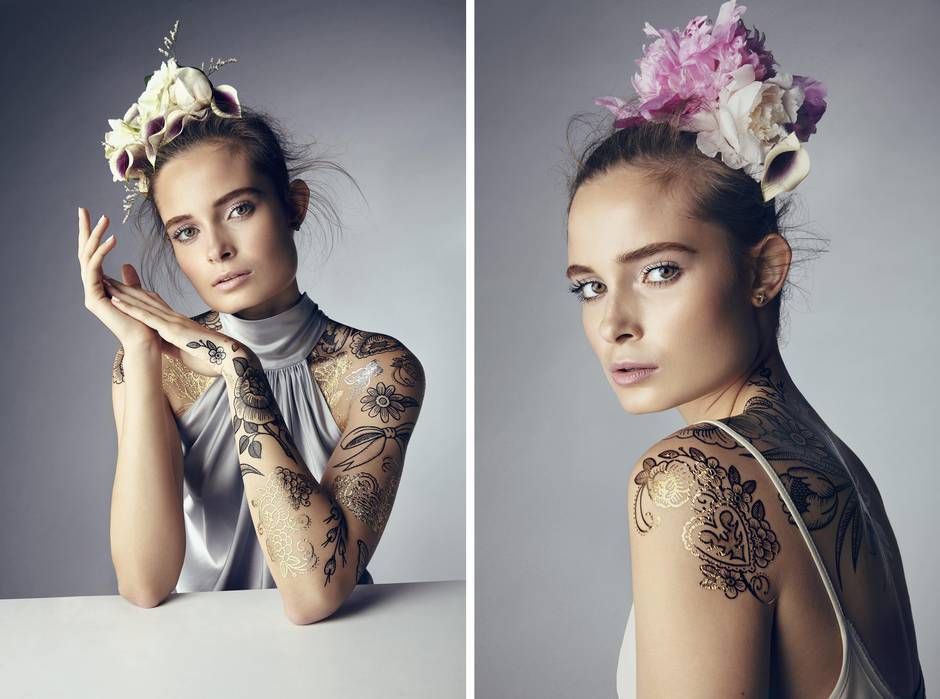 Twenty years ago, Chanel airbrushed an ankle bracelet tattoo off the leg of its campaign star, Stephanie Seymour, in an effort to distance the brand from the supermodel’s infamous rock and roll lifestyle. Two decades later, the French label’s current advertisements feature the similarly rebellious Cara Delevingne proudly displaying a lion drawn on her index finger.

Chanel’s new attitude towards body art says much about the evolution of the brand from a stuffy house selling tweed suits to a more youthful label that trades in couture sneakers. But it also signals how tattoos are increasingly seen as an It accessory with the same trend-setting status as a statement handbag. From music festivals to Instagram – where a search for the hashtag #flashtattoos results in 80,000-plus images – to bridal blogs, ink is in. And, thankfully for the needle-averse and fad-phobic, that ink is often temporary.

“Tattoos last longer than romances,” reads a sign that’s ubiquitous at tattoo parlours. It’s a nostalgic sentiment left over from the time when the art form represented a rebellious counterculture and lifelong commitment. As a fashion statement, tattoos were first in vogue among the British upper class during the Victorian era – Lady Randolph Churchill famously sported a snake on her wrist and Queen Victoria herself was rumoured to wear a Bengal tiger fighting a python – and the temporary variety were given away as prizes in boxes of caramel corn. In the 1960s flower power era, beauty conglomerate Coty made an ambitious attempt to make “instant tattoos” hip, with fifty designs that included butterflies and the mod bulls eye symbol. 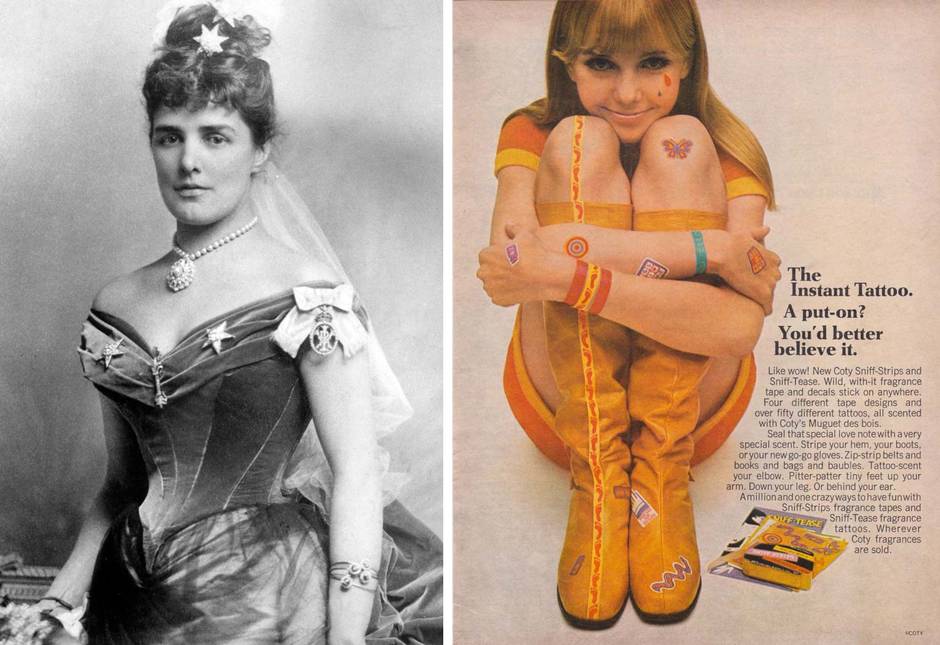 Today’s interest in temporary – or “flash” – tattoos stems from the recent popularity of getting permanently – and thoroughly – inked (think of the colourful forearms of your favourite barista), but its high fashion roots owe as much to jewellery design and celebrity makeup artists. The current revival began building steam in 2010, when Chanel released a limited edition collection of trompe l’oeil jewellery tattoos hand drawn by Peter Philips, the Global Creative Director of Chanel Makeup. In 2012, Dior teamed up with jewellery designer Camille Miceli for its own set of designs, which included cuffs, chokers, earrings and bracelets made of 24-carat gold microparticles. 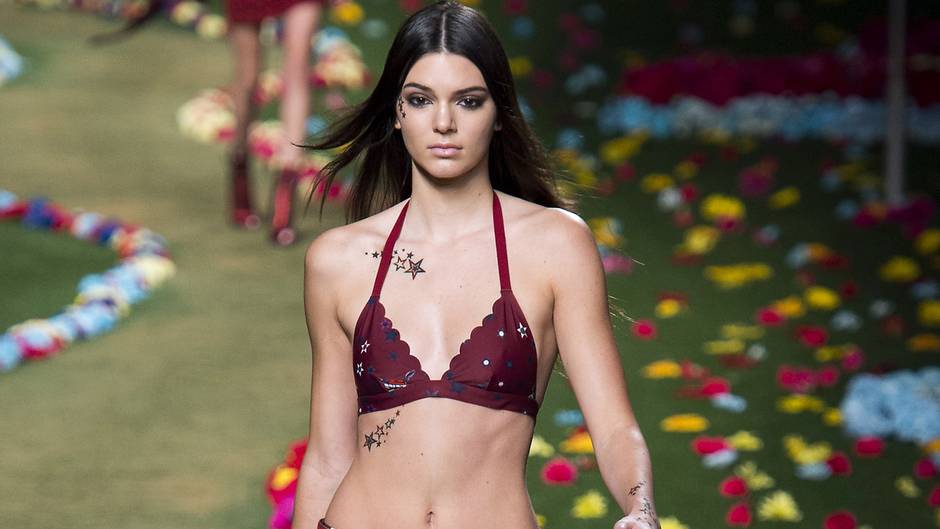 The current crop of supermodels don’t shy away from (permanently) inked self-expression: Freja Beha Erichsen, Abbey Lee Kershaw and Erin Wasson sport over a dozen tattoos each. The recent surge in flash options owes much to Delevingne. When the British model arrived on the red carpet at the China-themed Met Gala this past May, her arms and chest were covered with graphic cherry blossoms and swallows, leading many to wonder if she had gotten carried away with her well-documented tattoo enthusiasm. She hadn’t. Celebrity tattoo artist Keith “Bang Bang” McCurdy, whose work is permanently displayed on the likes of Katy Perry and Rita Ora, painted the intricate, temporary composition just for the occasion. 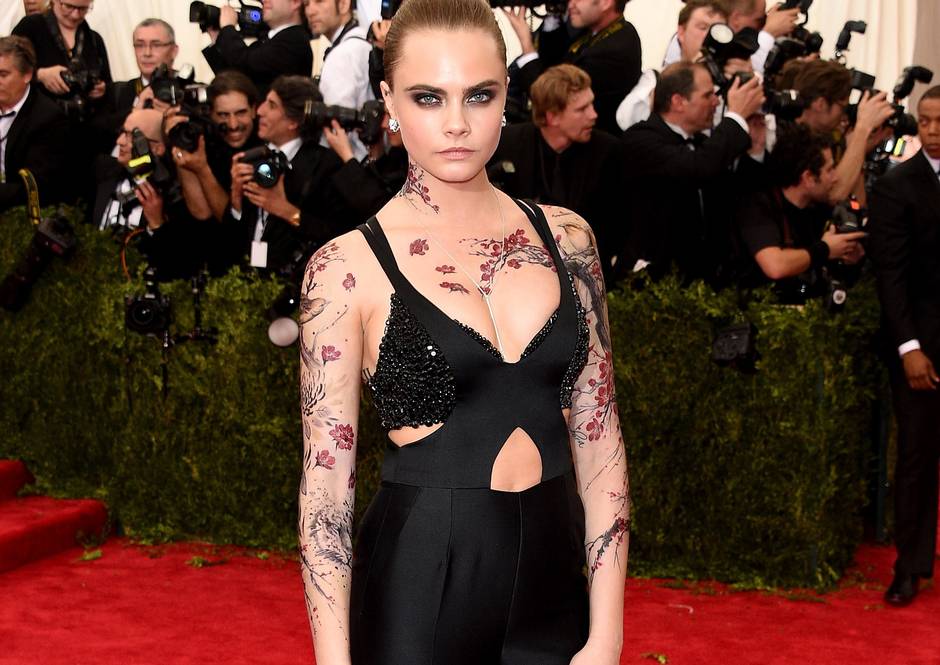 Both Sarah Jessica Parker and Beyoncé have been spotted in the temporary, mehndi-inspired metallic designs of Lulu deKwiatkowski, the New York-based textile designer behind the brand Lulu DK. Her work often draws on Indian and Moroccan artistry for inspiration and looks like a dainty bracelet or body chain. “I love how I can travel, swim, paint and not have to worry about the clang-clang of real jewellery,” she says.

Recognizing the interest in deKwiatkowski’s intricate designs, many fashion and beauty brands have jumped at the opportunity to work with her, resulting in current collaborations with Brazilian flip-flop label Havaianas and high-end hair care brand Joico. She also teamed up with four jewellery designers–Alison Lou, Daniela Villegas, Noor Fares, and Paula Mendoza–for a capsule tattoo collection that is sold exclusively through the online retailer Moda Operandi. When asked about her thoughts on permanent tattoos, she replies, “I would so much rather have a gold tattoo that I can change around than a dark green one I’m committed to forever.” 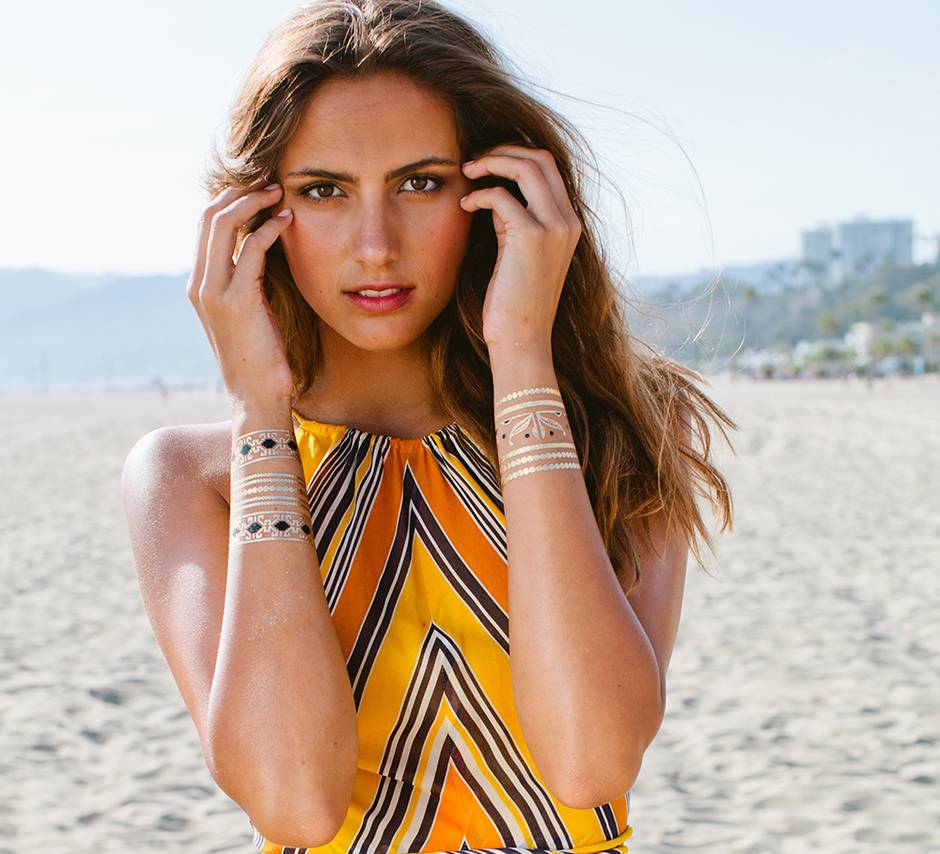 In contrast to Lulu DK’s jewellery approach, the Calgary-based retailer Tattoo You has its roots firmly in the tattoo subculture. It carries designs by famed tattoo artists, including Dan Smith of LA Ink fame. “We wanted to celebrate tattoo culture,” says co-founder Carl Lukasewich, a graphic designer and tattoo aficionado who sensed the emergence of the temporary trend last year and set out to introduce decals that could pass for the real deal. Having established artists design the tattoos adds to their credibility.

“It’s no longer the realm of the bad boy rockers,” says Lukasewich. “With temporary tattoos, people can feel a part of the movement without having to commit.” The Tattoo You team scours Instagram and Pinterest for unique tattoo artists whose work can be added to their inventory. Metallic options are particularly popular (their best seller is an ornate gold rose designed by Florida-based artist Myra Oh). Their clients order them for special occasions like weddings and proms, or before they take off for a beach vacation. In some cases, temporary tattoos are used as a trial run before a customer commits to something more permanent. “We’ve found a lot of women use our tattoos to test out a theme or size before they get a real tattoo,” says Lukasewich.

The collection – rendered in black and gold – includes chokers, knuckle letters and chain sets, available for a small fraction of the price of Aiche’s luxury jewellery. They will, no doubt, be popping up on beach-bound bodies all summer, before being easily removed in time for autumn – or whenever another inked celebrity eclipses Riri as the tattoo trendsetter du jour.