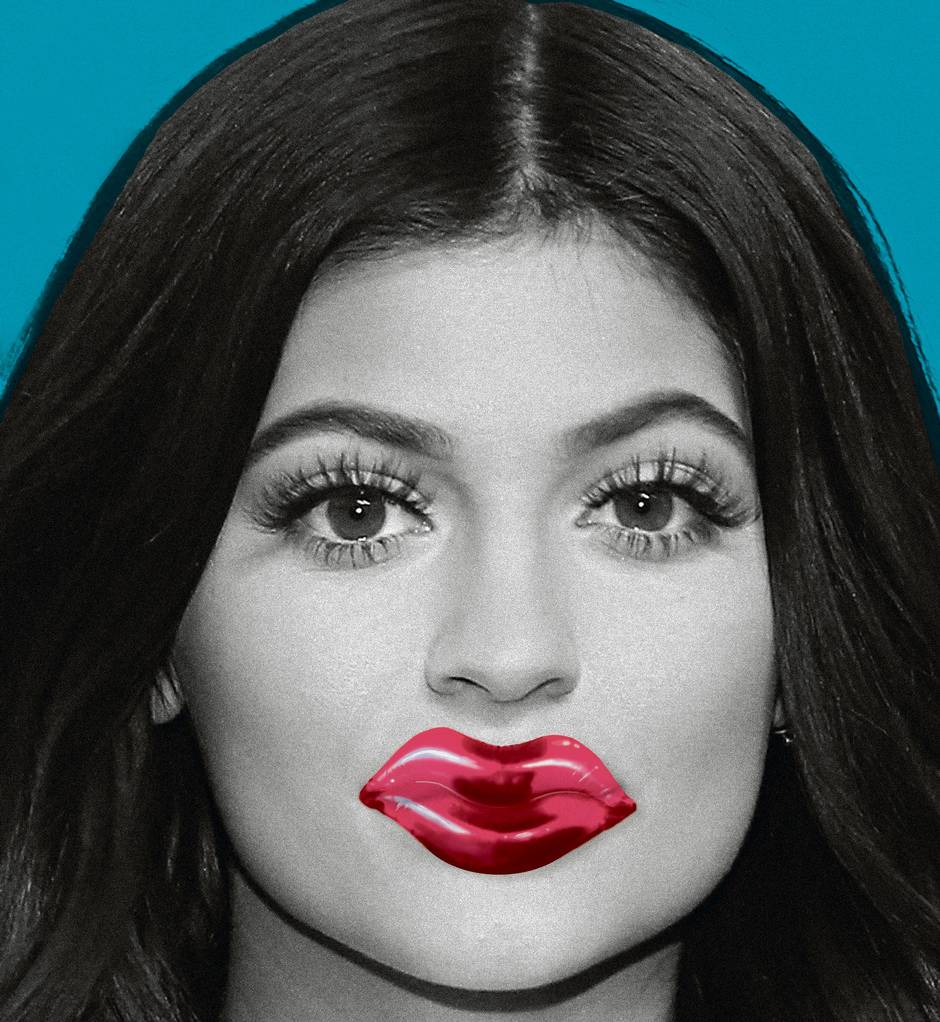 Images of young women, lips severely swollen and bruised from aggressively sucking the air out of shot glasses, began to flood social media in April. The disfigurement was intentional – an attempt at DIY lip plumping inspired by 17-year-old Kylie Jenner’s oversized pout. The frequently disastrous results were mocked by columnists and reposted across the internet, partially to warn other girls off the trend and partially because, like watching a train wreck, it was hard to look away.

The results of the Kylie Jenner lip challenge might seem extreme, but a growing group of millennials are going several steps further to alter their facial contours. The American Society of Plastic Surgeons last year reported that in female patients aged 20 to 29, face-shaping cosmetic procedures were on the rise: Requests for hyaluronic acid fillers were up by almost 10 per cent, while Botox and chemical peels saw similar upticks. What’s more, according to dermatologists, young patients aren’t looking for subtle results; they want the ‘work’ to be noticeable. That’s because the puffed and plumped ‘richface’ aesthetic is the new Louis Vuitton handbag in certain circles – an instant, recognizable marker of wealth and status.

The Canadian Society of Plastic Surgeons doesn’t release statistics, but doctors and clinic owners here are also reporting an increase in young patients. “To my surprise, the predominant age group I’ve seen for procedures over the last two years is between 28 and 33,” says Katie Rietta, owner of Skin Deep Phototherapy in Mississauga, Ont. “Ten years ago, I mostly treated teens for acne or those over 50.”

Unlike generations before them, this new class of cosmetic injectee doesn’t hide its enhancements in shame. Rather, its plumped-up lips and puffer-fish cheeks are often a source of pride. “Patients in their 50s and 60s would never admit that they got something done, but many younger women like to brag that it’s part of their beauty routine,” says Dr. Julia Carroll, director and dermatologist at Toronto’s Compass Dermatology. “They post on social media that they just came from the dermatologist with a photo of them giving duck lips.”

Getting the look certainly isn’t cheap. At reputable clinics, Botox costs $10 to $15 per unit, which translates to $200 to $400 per facial area. Lip and cheek fillers like Restylane and Juvederm ring in at about $500 per syringe (lips typically require one syringe, but cheeks can need two or three) and must be retouched every six to 12 months. Laser facials like Fraxel average $1,000 per treatment session, and less invasive medical facials like OxyGeneo and Microdermabrasion – which shrink pores and plump the face – cost about $200 a pop. To maintain the look, patients must return weekly or biweekly for six to 10 more treatments, followed by upkeep one or twice a year.

While millennials have their share of unemployment, student debt and other hardships, theirs is also the largest demographic in history to be raised by wealthy parents. According to American Express and Harrison Group’s annual survey of wealth in America, 34 per cent of millennials have been affluent throughout their lifetime. More of them remain in the uber-rich one percent than you think: The Shullman Research Center reports 23 per cent of today’s millionaires belong to Generation Y.

What complicates the issue, at least for luxury brands attempting to woo them, is that millennials don’t seem to be attracted to traditional status symbols. According to research by luxury marketing expert Pamela N. Danziger, Dad’s convertible and Mom’s designer labels are old news – that’s what these kids grew up with. Instead, they crave enviable experiences – shareable, easy-to-snap ones. According to Dr. Carroll, duck lips frozen in a camera-ready pout feed neatly into that category.

Not surprisingly, the affectation is most common among those with money and a public image to manage: actresses, models, socialites, bloggers and Instagram starlets. “A lot of my friends in their 20s and early 30s have had cosmetic work,” says Jessica Denomme, a 28-year-old lifestyle publicist in Toronto. “Everything from nose jobs to breast augmentations, dental veneers, injections, fillers and more.”

According to Denomme, richface has been driven, in part, by changes in the way we shop and dress. After all, lightning-fast trend cycles and endless cheap imitations have heralded the decline of fashion as an easy visual marker of wealth. “The most expensive dress in the world can scream cheap and tacky. The lines are blurred,” explains Denomme. “But having Botox or lip injections clearly says someone has money to spend.”

Dr. Shannon Humphrey, a clinical instructor at the University of British Columbia Department of Dermatology and Skin Science, concurs, noting that younger clients are using fillers to send a message: “My colleagues in Los Angeles and New York City often hear, ‘No one else is going to know. What’s the point?’ after they perform a filler treatment. Not only does the patient have to see it, but their friends and family have to be able to tell, too.”

Likewise, in Dr. Carroll’s Toronto practice, 20-something clients request lips more pronounced than what’s considered natural: “There’s a difference between enhancement and enlargement, and young women definitely like more enlargement. It’s a bit of a fashion statement, but the good news is that most fillers are temporary – kind of like wearing a nose ring in your 20s.”

Theoretically, there are limits to how young a patient should be – however there are no hard and fast rules Canadian practitioners must abide by. “I recommend patients consider cosmetic treatments such as Botox and soft tissue fillers only after they’ve fully developed physically and, usually, this is after the age of 18,” says Dr. Vince Bertucci, president of the Canadian Dermatology Association. Otherwise, any work done could look “off” when a client’s face grows or shifts proportions. “The face needs to be assessed in its full adult state.”

A growing cause for concern is that cash-strapped teens sometimes turn to discount providers who often don’t have proper training or quality products. “Groups of friends as young as 18 will go together and get their lips done at bargain-basement prices,” says Dr. Carroll, who performs a lot of corrective procedures after the fact and warns that patients can get bacterial infections without proper oversight. “If you’re getting something that’s really inexpensive, is it the real product? Is it expired?”

The key to the richface trend is getting good work done by an experienced doctor. The goal is a hint of augmentation – just enough to make people wonder – but by no means a Real Housewives-esque plastic assault on the senses. If you’ve hit Daffy Duck doppelganger status, you’ve gone too far. Unlike Louis Vuitton handbags, there is no counterfeiting and the cheap stuff is immediately obvious.

“The result still has to be realistic. You should think, ‘Yeah those are probably not real, but they look good on her,’ versus, ‘Wow – what did she do to herself?’” explains Dr. Carroll. “You get what you pay for.”

Women who are wary of needles and lasers, or who can’t afford them, can imitate the trend with advanced makeup techniques such as contouring. A quick YouTube search returns thousands of video tutorials on how to mimic supersized lips with various beauty hacks. YouTube personality and comic Jenna Marbles has even parodied the trend with her own Kylie Jenner lip tutorial. Among her tips? Exfoliate your lips with cat litter then apply “things that burn” like jalapeños and “straight acid.”

“I notice a lot of women in their 20s and 30s want to change the overall shape of their face with extreme contouring,” says Tami El Sombati, a Toronto-based makeup artist. “But, as a daily routine, this is very time consuming to apply and remove properly.”

Heavy-handed contouring – and several other hallmark features of richface – can be credited in part to drag queens, who first used the technique to achieve the illusion of hyper-feminine faces. In his viral YouTube video “Instagram is turning girls into drag queens,” makeup artist Wayne Goss complains that women are “borrowing techniques from drag queens that have existed for so many years… but not diluting them.”

The desire to look picture perfect in today’s camera culture fuels this over-the-top approach to grooming. “The selfie has turned an extreme aesthetic that wouldn’t normally be acceptable into something people want on a daily basis,” explains Melissa Gibson, a senior artist for M.A.C Cosmetics. “It doesn’t appear very natural outside of a photograph, but for some women, that synthetic look is now part of the appeal.” Some choose to make their exaggerated features more permanent with the help of injectables.

Alexander Edmonds, professor of social and medical anthropology at the University of Edinburgh and author of Pretty Modern: Beauty, Sex and Plastic Surgery in Brazil, agrees: “Part of the draw of duck lips is that some people like the artificial look. I am reminded of anorexia– which is not only a disorder of eating, but a disorder of perception. There is an addictive quality to cosmetic surgery that can alter, not just the body, but the perception of what is natural, artificial or beautiful.”

So are we headed towards a dystopian future where class can be discerned by a quick glance at someone’s face? Where one per centers seek plastic surgery explicitly to distinguish themselves from the thin-lipped masses?

Like rib removal and foot binding, future generations may see this obsession with injections and lasers as an extreme and unusual practice. Then again, women still wear stilettos. According to Edmonds, “There’s a vicious circle effect– the more these procedures are done, the more normal it becomes and more people want to do it.”