Sideboob. Underboob. Total boob. The contours of women's breasts are coming into view from every angle. On the spring/summer 2017 runway at Céline, several dresses had strategically placed crocheted chest panels that drew attention to the bosom, and prints that evoked the naked female form. Ditto a gauzy embellished dress in Maria Grazia Chiuri's Christian Dior debut, where worshipful embroidered hands seemed to gently reach up and cup the wearer's breasts. In Anthony Vaccarello's Saint Laurent lineup, the black strapless leather look on model Binx Walton went one step further: One side of the bodice was folded down as though it has been hastily pulled away to reveal a pasty-covered breast. As brazen as that was, it wasn't the most discussed look at Paris Fashion Week earlier this month. Getting all the attention was something not on the runway, but in the front row at Haider Ackermann. It was here that Nicki Minaj was perched in a sculptural Thierry Mugler jacket that exposed her left shoulder and breast. A silver-stud pasty covered her nipple in a glib concession to French modesty laws.

Not long ago, outside of prescribed areas – lads' mags, pornography and fashion shoots – the naked female breast was a rarity. But today, it's part of a full-frontal sartorial challenge, one that's particularly relevant because of new repressive policies and positions in the U.S. that trivialize crimes against women and the politics of discrimination.

The trend has a correlation with social and political constriction; these recent displays are on a continuum with the "tit-ins" and other women's rights protests that have been taking place since the 1970s, according to Dr. Rebecca Sullivan, a professor and coordinator of the women's studies program at the University of Calgary. They're the ultimate in feminist defiance – a shunning of societal expectations and modesty norms at a time when Ivanka Trump's pro-woman claims come clad in body-conscious sheaths that play coy to fall within the bounds of what conservatives deem appropriate female attire and, by extension, behaviour.

It began in earnest in the final, heated months of the U.S. election, as sexist revelations about Donald Trump dominated the news. Kendall Jenner and Kim Kardashian started wearing transgressive sheer tops and dresses more often, and in spite of headlines written in the language of scolding and titillation, using phrases like "flashes her chest," suggestive of lewd and retro prurience rather than acknowledging that these are adult women who've decided what they want to wear and reveal.

In an untenable, contradictory culture, these topless (or virtually topless) women are undeniably performative. "They're reclaiming their sexuality – not pretending that it doesn't exist with some sort of bulls--t modesty," Sullivan adds, "and not playing coy with it and allowing the camera and the industry both to own it and shame it."

But not all cleavage is created equal. "Context matters," says Sullivan. "Someone like Rihanna – who wore a sheer crystal-covered dress to the 2014 CFDA awards, sans pasties – is very clear about their intentions." Sullivan likens Rihanna to Rose McGowan who wore a sheer beaded slip dress to the 1998 MTV Awards. It is Sullivan's favourite example of all time: "It is outspokenness, defiance and refusal to conform to the very strict limitations of being an ingenue, and Rihanna is similar in that vein. They're both refusing the ways in which their respective industries want to define the limits of their sexuality and sexual expression for their own purposes."

Minaj's breast-baring outfit was very much a refusal to conform. And though it may not have been a wardrobe malfunction like Janet Jackson's breast-baring 2004 Super Bowl performance, it was just as much of a performance: a topless political demonstration of one, whose goal is to disrupt the male power structure and the male gaze of paparazzi surreptitiously taking shame shots.

"Women are being told to stay quiet. And, even more so, that they need to align or maintain their sexuality in line with men's desires and men's need for control and ownership of their sexuality," says Sullivan. "In that, there are many, many gestures that are possible in defiance, from a refusal of the hyper-sexualization of the breast to the ownership of how one's breast will be displayed and sexualized."

Skirting around Instagram's terms of use that prohibit photographs of female nipples, on March 7, Lena Dunham bared the permissible underside of her girls on the social media site with a caption thanking a Norwegian artist for the new decorative swags on her rib cage – a tattoo that Dunham calls her "warrior's chest plate/tit chandelier." Dunham's warrior allusion is apt now that breasts are the latest and most visible body battleground, coming from high fashion down into mainstream politics. Like the 1960s women's movement, they've gone from Wonderbra to woke.

There's a distinction between the two responses, however. "There's the desexualization and the f––k you sexualization," Sullivan says. Whether it's Miley Cyrus in her silver disco Oktoberfest ensemble (basically leder, minus the hosen) or the topless political protests of feminist groups like Femen, baring the chest is a political chess move. "Breasts in public are meaningful," Sullivan says.

During the fight for the reproductive freedom of the Pill and access to legal abortion of the 1960s and 1970s, for example, avant-garde Rudi Gernreich's most celebrated design was the monokini. Also known as the topless swimsuit, he launched the counterculture garment in June of 1964 as both an affront to and commentary on repression. It was released on the eve of the Sexual Revolution and while the American government was debating issues of reproductive freedom and gender equality.

If you recall, that second wave of feminists burned their bras, though some fourth-wave feminists today paradoxically still expect women to wear one. Actor Emma Watson learned this after appearing in the March 2017 issue of Vanity Fair; in one photo, she wears a neck ruffle and capelet by Burberry that just covers her bare chest. Journalist Julia Hartley-Brewer took to Twitter and suggested Watson's quasi-topless pose undermined her politics: "Feminism, feminism… gender wage gap… why oh why am I not taken seriously… feminism… oh, and here are my tits!"

Through shaming and finger pointing, Hartley-Brewer made presumptions about both Watson's intentions and the context in which the outfit appears, that it was the result of pandering and the usual celebrity industry conditioning – the imbalance of power behind every ingenue's requisite lingerie pin-up shot and rictal pout on the path to fame. A champion of the HeForShe campaign and outspoken voice on other political issues, Watson has since defended the photographs by reminding everyone that the women's movement is about liberation and equality and freedom of choice – including the decision to bare one's breasts.

Political protest fails to take off from the fashion show runway
February 14, 2017 Canada’s best dressed have spent years cultivating a style that’s all their own
March 18, 2017 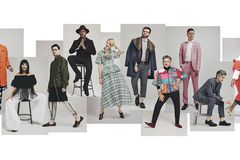 Fall forward: The moments that mattered during fashion month
March 7, 2017 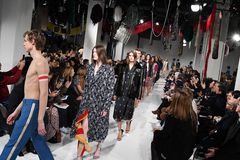