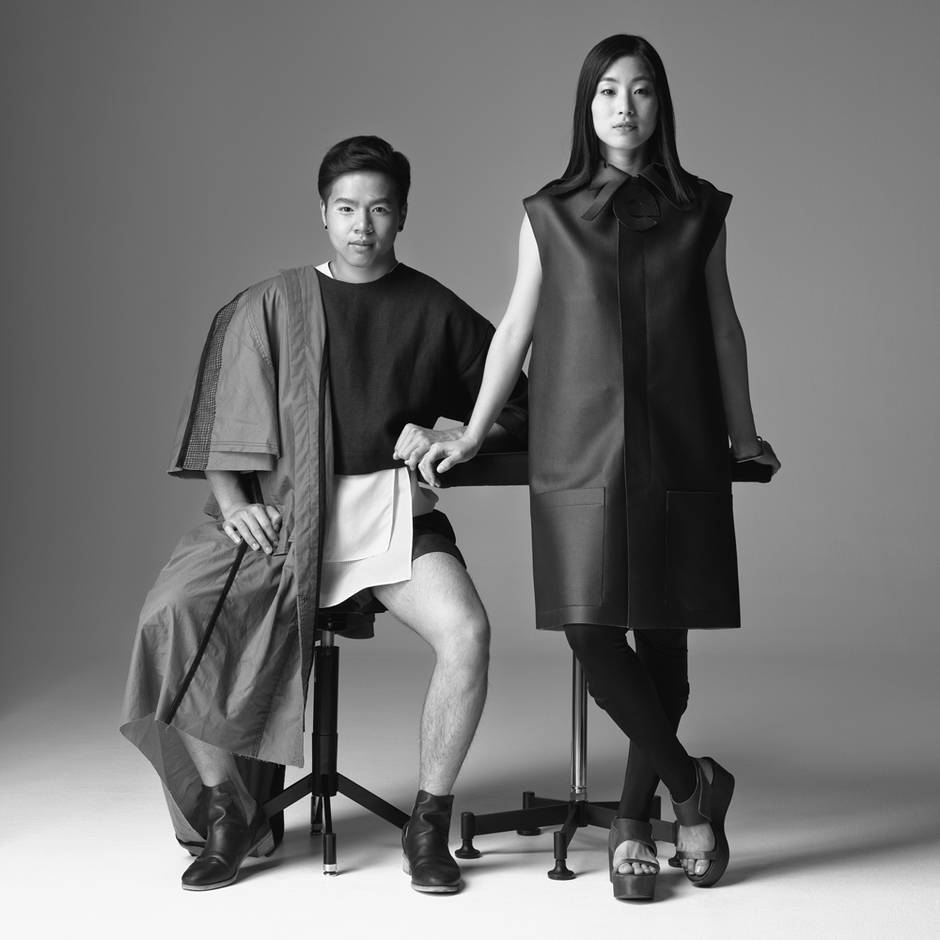 Friends from Ryerson University, Rani Kim and Som Kong will be showing their first Fashion Week collections just months after graduation. Kim, who was born and raised in South Korea, currently juggles both a full-time position as product-design assistant for Joe Fresh and her own men’s line, Rank by Rani Kim. Hailing from Hamilton, Kong, whose eponymous line includes both men’s and women’s wear, was exposed to fashion through his mother, a seamstress for Levi’s. “I sewed darts before I even knew what darts were,” he says. While in school, both landed good internships: Kong at Danier and Greta Constantine, Kim at Jeremy Laing, Farley Chatto and Astrid Andersen in Denmark. “We’ve been head-to-head with a lot of things,” Kong says, “but it’s never been about competition.”

As recent graduates, what does it feel like to enter the fashion world?

Som Kong: What I appreciated from school was the set schedule: You knew what was going to happen next. You’re constantly learning, making mistakes. You don’t really have to worry about finances. Now, time is very valuable – especially if you want to own your own business. I feel more responsible.

Rani Kim: It is a little bit scary; I’m not going to lie. But I love it. I really enjoy it.

The business of fashion is a tough one. Are you prepared?

RK: It is tough. But then, what isn’t tough?

SK: When you try to wrap your head around how tough the business is, it becomes tough. But when you kind of just do it without thinking, ignorance is bliss. It’s not always a great thing, but making mistakes is the best way to learn. When you have the mentality that you can do it, you’re halfway there.

RK: I should really think more about the business. It’s not that I don’t think about it, but I’m the happiest woman when I’m sewing. If I keep doing what I love, it will eventually work out.

Many Canadian designers end up moving abroad. Do you have those aspirations?

RK: In Toronto, men’s wear is really booming right now so I want to start here. I really do believe that if you can start in Toronto, you can do anything overseas as well.

SK: I was set to move to New York right after graduation. I had the money; I was ready to go. When Toronto Men’s Fashion Week came along [in August], I decided to stay. I think Toronto is the best place to make mistakes and grow.

How important is keeping manufacturing in Canada?

SK: I don’t think it’s realistic, to be honest.

SK: With any business, it comes down to the budget. I hope to have my own manufacturer one day in Cambodia, where there’s no language barrier [for me], and have my own fashion house there while being located here.

Where do you see yourselves in five years?

SK: I don’t want to be looking for a job; I want to be creating jobs. Manufacturing comes into the picture. Sweatshops are constantly on consumers’ minds, with big companies having to go to Third World countries to get cheaper prices. With the whole [labour controversy] in Bangladesh and because of social media and increased awareness, people know where their products are coming from. So if I were able to own my manufacturer, I would pay my employees enough for a decent standard of living.

RK: In Korea, all the men have to go to the army for two years after graduating, so, for two years, I’m going to do anything that I can do, anything that’s available to me. Any opportunity, I’m going to take it. Eventually, I really want to have my own established brand. It doesn’t have to be big, but I want to sell in stores internationally. 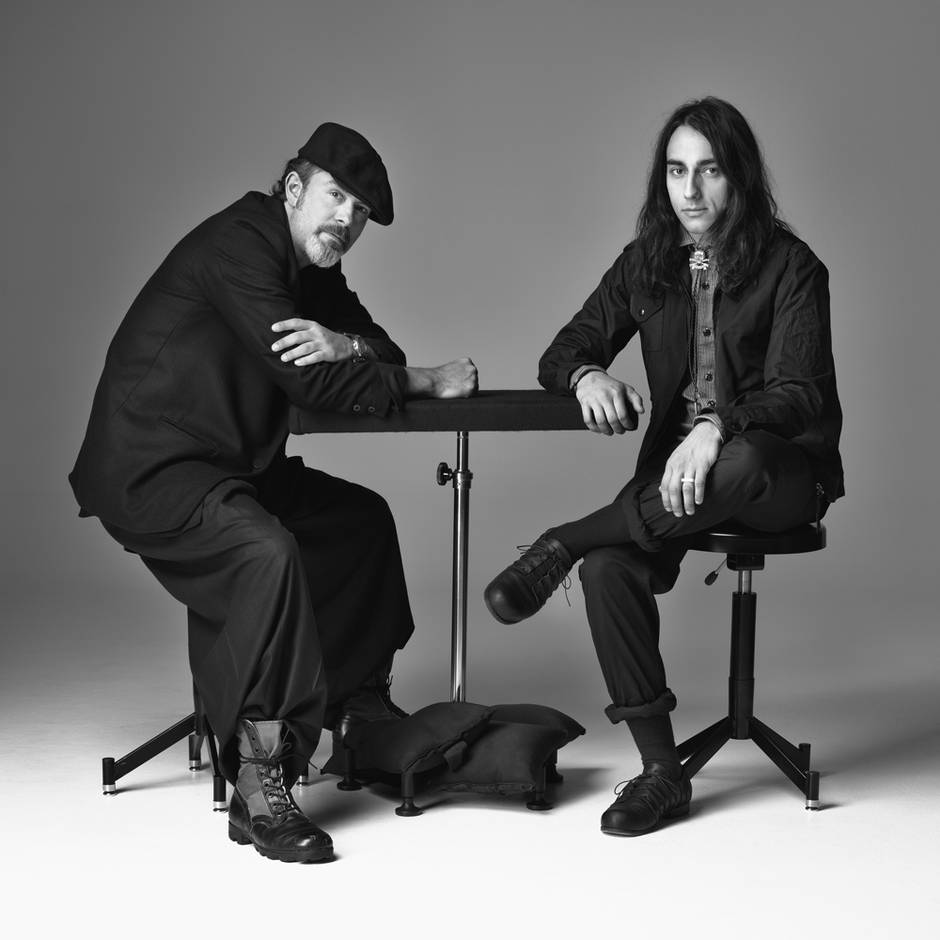 “I am a lot older than a lot of people in this industry,” says Matt Robinson, the 44-year-old behind Toronto men’s-wear label Klaxon Howl. The fashion veteran has been mentoring up-and-coming men’s designer Michael Thomas Bálint, who launched his namesake line, Thomas Bálint, in 2010. The two designers first crossed paths at Toronto Fashion Week (now World MasterCard Fashion Week) in 2011 and have “become inseparable since,” jokes Bálint. Robinson and his long-time business and life partner, Lena Kim, took a liking to the young designer, whose now-shuttered store was close to their own, even helping him with technique. “What we share in common is our love of classic clothing pieces, form, function and fit,” says Robinson. This season, both designers are debuting women’s pieces at Fashion Week.

We tend to think of fashion design as a very glamorous job. Do you think young designers have a good understanding of the industry?

Matt Robinson: They don’t really know what they are in for. They are looking at blogs and fashion magazines and think that’s what the industry is. And everyone wants to be a designer. Try and find somebody who wants to be a sewing-machine operator, a pattern drafter, a cutter. [Designing is] why everyone starts a line and they only last a couple of seasons.

Michael Thomas Bálint: I just closed my store [in Toronto]. A big portion of the clientele were fashion students, so it was really hard to watch these kids come in and know that they are going to have to struggle so much.

MR: It’s also timing. We were going to be picked up by Harvey Nichols Hong Kong, Opening Ceremony – there are always these great opportunities and you get all excited and then it doesn’t happen.

Neither of you are particularly trend-driven designers. Has that been a challenge in promoting your brands?

MTB: My grandma drafted the blazer [Robinson] wore for this shoot decades ago. She was a tailor. I use her pieces in almost every collection. It’s important to the brand.

MR: We usually hit trends before they even happen. We did Hawaiian shirts last summer before Prada did theirs. But I never know until somebody in the industry is like, “Oh, you’re really on trend this season.” You make these pieces that are timeless yet not boring, with great fabrics and colours, good construction and fit: Why do I have to reinvent myself every season?

MTB: For the past couple of seasons, I’ve been going to [my showroom in] Paris and [buyers] have a totally different mindset. You have to have a really strong history, along with your brand, and a strong story to tell with it. It’s frustrating that the people who really care about this stuff are so far away; it costs so much money to be able to take your collection [to Paris]. We have an amazing Fashion Week, but it’s just all press.

MR: I’m always optimistic that next season [of Fashion Week] will be better. We get some great pictures out of it and we use that.

MTB: I did get really good press last season, but that didn’t translate into sales.

MR: [Fashion Week is] good for reminding people that you’re there and that you’re still doing what you’re doing, and to create a certain desire for what you make.

Matt, in the 20-plus years you’ve been in the business, how has the Canadian fashion scene changed?

MR: It’s definitely bigger, way more people are doing it. But there is way less manufacturing. I mean, there’s still manufacturing here for the smaller labels. There’s no way you can start a line and go immediately to China or India. But even when we were doing large-volume sales, our mantra has always been “made in Canada.”

MTB: When I had the shop, it was always very important to tell people where the fabrics were from and where everything was made. All of my fabrics are from First World countries. There’s definitely nobody dying at my expense. I think the whole Joe Fresh thing [in Bangladesh] was a pretty big eye-opener, and then everyone forgot about it. 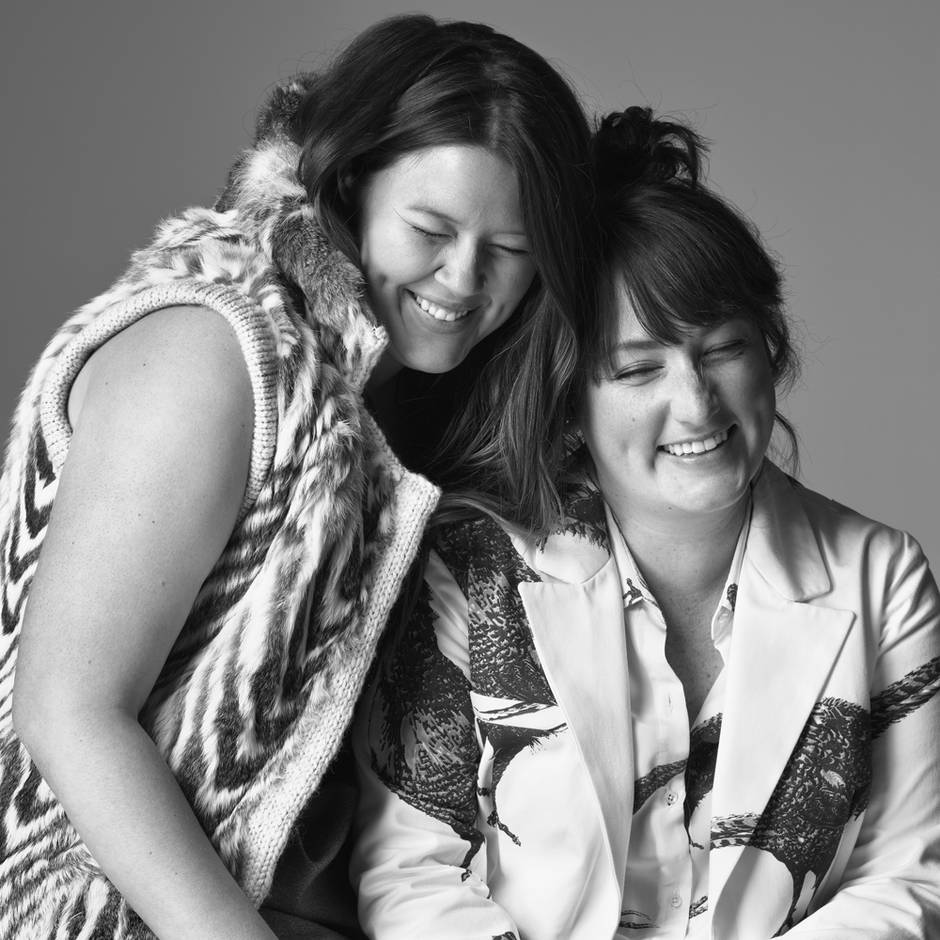 Hilary MacMillan and Leah Antoinette met several years ago through their publicist and, as Antoinette recalls, “it was friendship at first sight.” This season, both women are showing their collections at Fashion Week – a first for Antoinette, who designs under her label Elan + Castor. The line of intricate knits and captivating floral prints pays homage to Antoinette’s grandmother, who taught her how to wield a pair of knitting needles, a skill she later honed while studying knitwear and textile prints at the Academy of Art University in San Francisco. MacMillan, who attended the Blanche Macdonald Centre in Vancouver, is presenting at Fashion Week for the third time. Her classic ladylike silhouettes and fearless use of pattern (her spring 2015 prints are based on sunsets) have been well received – she has established a Paris showroom and is carried in boutiques south of the border.

What are some of the challenges you encounter running your own labels?

Hilary MacMillan: There were a lot of times when it was trial and error, and things didn’t exactly always workout the way I wanted them to. I made some stupid mistakes, but you learn and you change. I think shipping is a nightmare. I hate shipping! Leah Antoinette: Time and money. It’s really [about] making the right decisions and trying to get yourself out there. I’ll say it: I don’t think there’s a lot of support for Canadian designers, period. So it’s trying to be aggressive in the market, trying to stay in Canada and also trying to get your name out there internationally, because that’s how you’re going to get more recognition here.

What does Canada need in order to support labels like your own?

LA: Because I was in the States [for school], I saw what was going on there more than what was going on here. They have CFDA [the Council of Fashion Designers of America], they have a lot start-up programs for young designers. It’s superfrustrating because there’s a lot of talent in Canada. A support system – even tax breaks – would help, because you can keep selling and keep selling, but the bigger you get, the more expensive it is to run a company. Both Hilary and I are lucky enough to have financial backers, but not everybody has that. And retailers don’t really support Canadian designers as much as they should.

HM: Even the fact that there is not a really good Canadian trade show is telling.

How much retail buying happens at Fashion Week?

LA: None. We are past [the buying season].

HM: If someone fell in love with your line and they had extra money in their budget, they might.

LA: Or they’ll keep you in mind for next season.

HM: If they like you now, they’ll call you up for fall 2015. But Fashion Week is mostly for publicity.

You both manufacture in Canada. Is that important or just convenient for a small business?

HM: It’s important to me. We talk about supporting Canadian designers, so at the end of the day that should include supporting Canadian manufacturers. You also get better quality control and you can do smaller numbers. If one store wanted a style no one else bought, you can accommodate that.

LA: Half of my manufacturing business is in Canada and half of it is in L.A. because I couldn’t find a knitwear production house here. But if I have a chance to support Canadian manufacturers, I do as often as I can.

Do you both plan to stay in Canada?

LA: I’d like to stay here at least part of the time. This is my home: I was born here. If I can make a go of it here, I definitely will, but I don’t know. 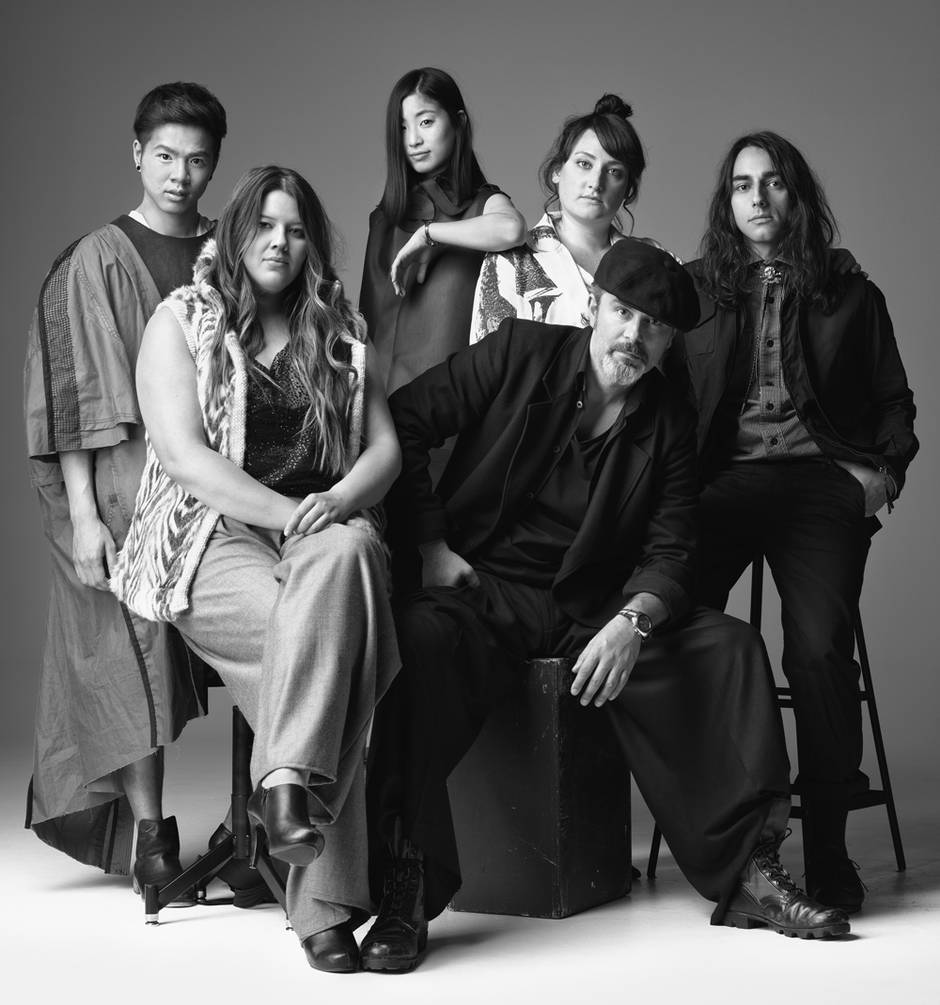