World-class contemporary jewellery design might be one of Canada’s best-kept secrets. Internationally recognized for work that executes elevated craftsmanship and boasting some of the best technical schools on the planet, our country is on the cutting edge of wearable works of art. Yet for whatever reason, the profile of our talent has yet to gain recognition.

“Our artists have been creating in secret in a lot of ways,” says Vanessa Laurin, who produces the Great White North Exhibition – a juried, annual competition dedicated to emerging Canadian jewellers that was founded in 2003. “They quietly make and sell and talk about their work in industry magazines, but really don’t get the attention they deserve or that they would get if they were in the fine arts world.”

Not only is Canada incredibly resource rich, says Laurin, but we have an abundance of talented tradespeople from all over the world who call this country home: “the best hand-engravers, the best stone setters, and a huge number of people who are highly-trained in very specific skillsets.”

It’s surprising to her there isn’t more of a crossover for this métier with Canada’s art and fashion scenes, as jewellery is an intrinsic part of both worlds. “Whether you look at these works as a miniature sculpture or as a statement piece, it is art that is worn on the body,” she says. “But Canadians haven’t caught on yet.”

The high Canadian calibre is something that Noel Guyomarc’h – who runs his eponymous contemporary jewellery gallery in Montreal – feels compelled to promote at Chicago’s Sculpture Objects Functional Art and Design exhibition each year. “People are used to looking at jewellery as jewellery,” says Guyomarc’h. “But these are truly works of art, [by virtue of] what we feel through the work, the execution of technical skills, the strength in the design and concept.”

While Guyomarc’h agrees our artists are better known beyond our borders, he is heartened by a growing interest at home. Since he opened his gallery doors in 1996 (and especially in the last five years), there has been a growing interest in “Made-in-Canada” wares, more specialized boutiques, jewellery collectives, workshops and juried competitions for designers to showcase and develop their talent. (To wit, the 12th annual National Jewellery student competition runs until Sept. 4 through L.A. Pai Gallery in Ottawa.)

Experimenting with alternative materials, innovating in 3-D printing and support for an outrageous, anything-goes attitude not bound by fabled jewellery design traditions like France or Switzerland, Canada’s work is a distinct blend between fine and art jewellery.

Here are some home-grown heroes to consider for your collection: 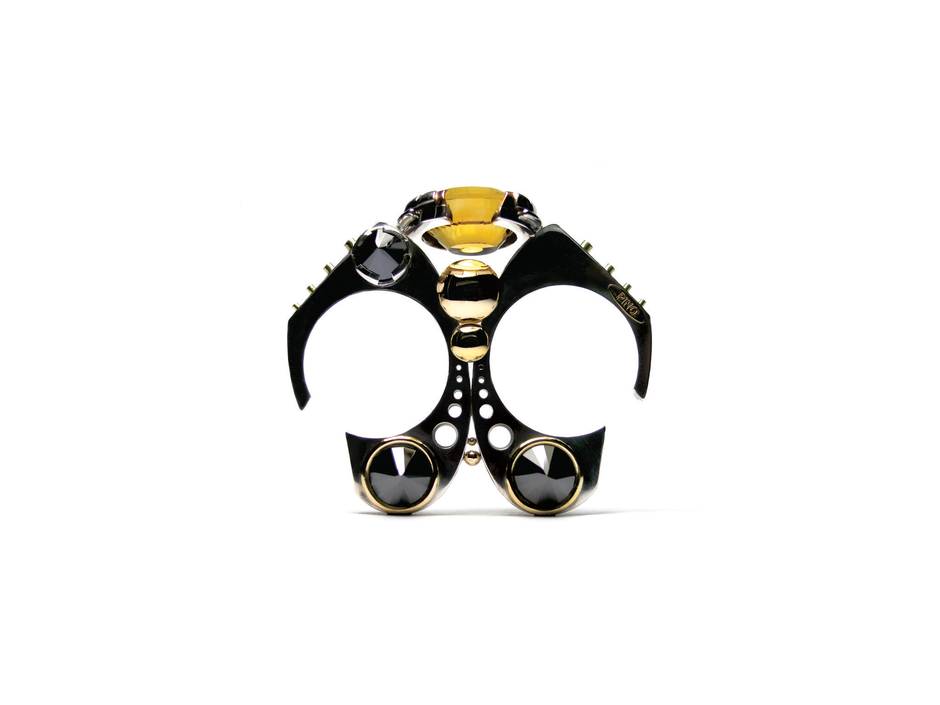 Claudio Pino is a Canadian artist with a huge international following and lengthy exhibition résumé, but he hasn’t quite become a household name domestically. The 2015 Niche Award Finalist “is a design force to be reckoned with,” 18Karat’s Laurin says. A veritable rock star of jewellery, he is one of the highest-ranked makers in the world, with work that is striking, sculptural and kinetic. “In a world of mass production and consumption, one-of-a-kind find jewellery pieces are becoming even rarer and, hence, more desired,” Pino says. In 2012, his signature aesthetic caught the eye of a PR professional with connection to The Hunger Games. His rings are worn by Stanley Tucci’s character (Caesar Flickerman). 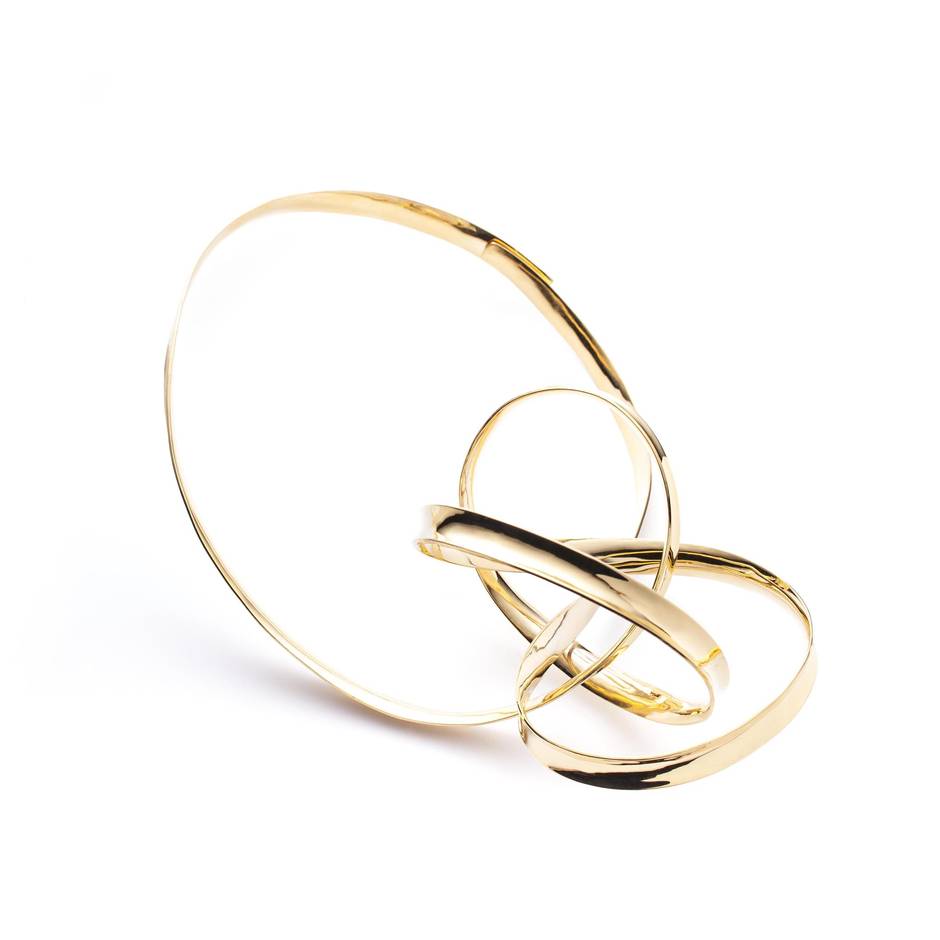 Based in Montreal, Gustavo Estrada’s elaborate metal formed necklaces give the illusion of wearing a gold ribbon. An educator at the École de Joaillerie de Montréal, his labour-intensive, fantastically forged, hand-formed pieces come in silver, brass and gold. And now is the time to buy: Estrada is hosting an Autumn Studio Sale on Sept. 25 at Studio 502 in Montreal. 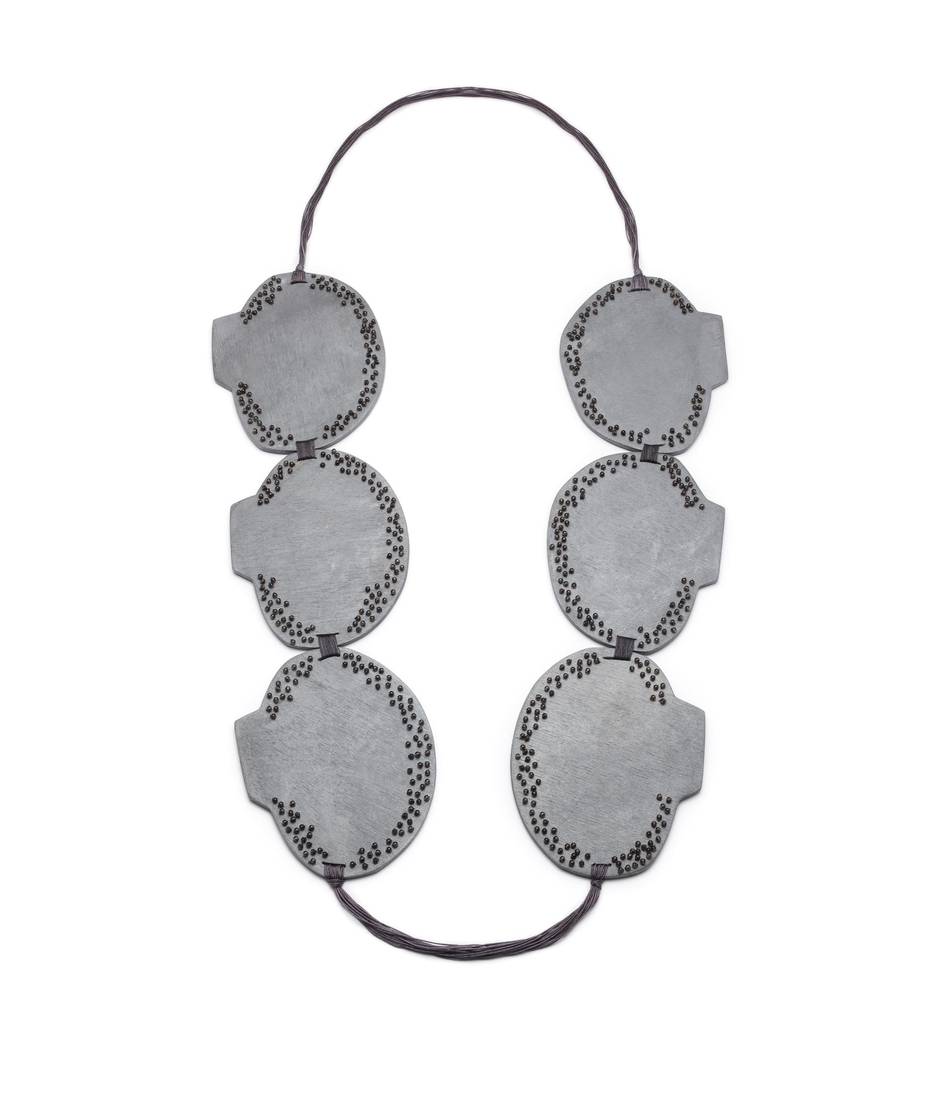 A harmony of raw material, wood and semi-precious stones characterize the work by Quebec-based artist Gabrielle Desmarais, and her brooches have been purchased by Musée des Beaux-Arts de Montréal to add to their permanent collection. Desmarais will be represented by Noel Guyomarc’h once again this year at SOFA Chicago. 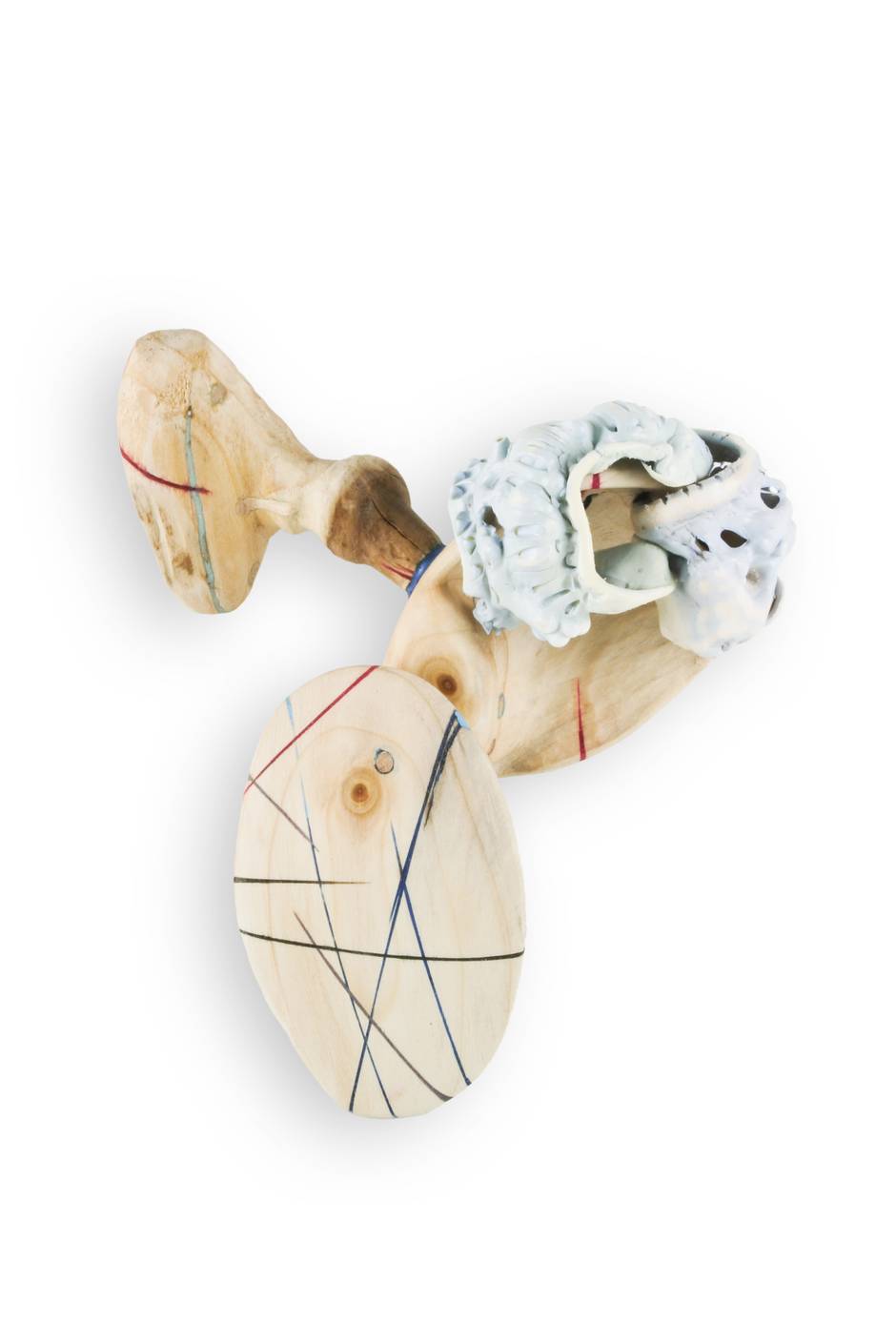 The 2014 Prix Émergence en métiers d’art winner in Quebec, Anne-Marie Rébillard’s work is characterized by the use of non-traditional materials and found objects. Giving life to fragments and shreds of nature, the abstract, textured shapes are made to look like bone.

Quebec-based Émilie Trudel was the 2015 Great White North Exhibition award winner in technical production. When wearing her brooch, the metal branches swing and move the way a tree might in the wind.

The tight-knit and supportive community in Canada helps artists to innovate, according to Alberta-based Pam Tymensen. “We may not be considered very brave or bold fashionably, but a lot of the jewellery designs coming out of Canada are extremely brave,” says the goldsmith, 30, whose work was named Best in Show during the 2014 Great White North Exhibition. “We’re all pushing the technical envelope … and helping each other to do so.” 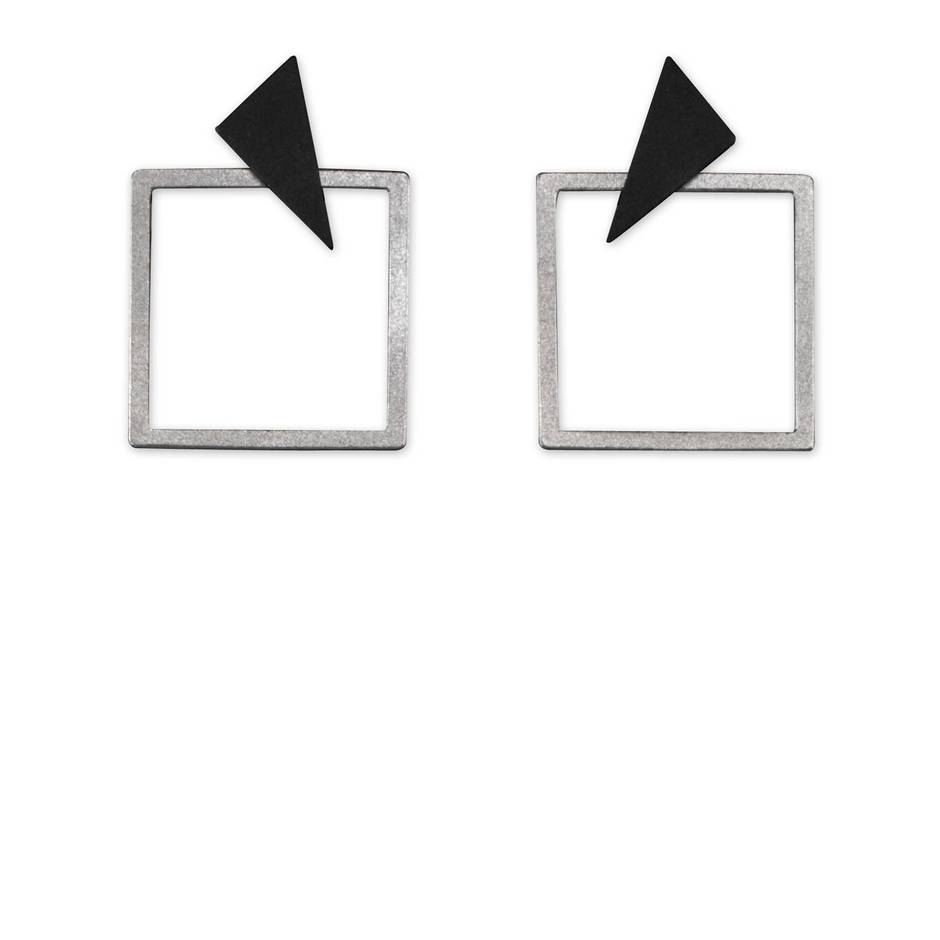 Internationally recognized jeweller Janis Kerman has been celebrated in the industry for 40 years, but has worked with Erin Wahed for the last five on their avant-garde Bande des Quatres line. The mother-and-daughter duo is hugely influenced by German jewellers, modern architecture and photography. Edgy, geometric shapes and a linear focus characterize the BDQ look, and their next collection (due out in September) is inspired by typography. 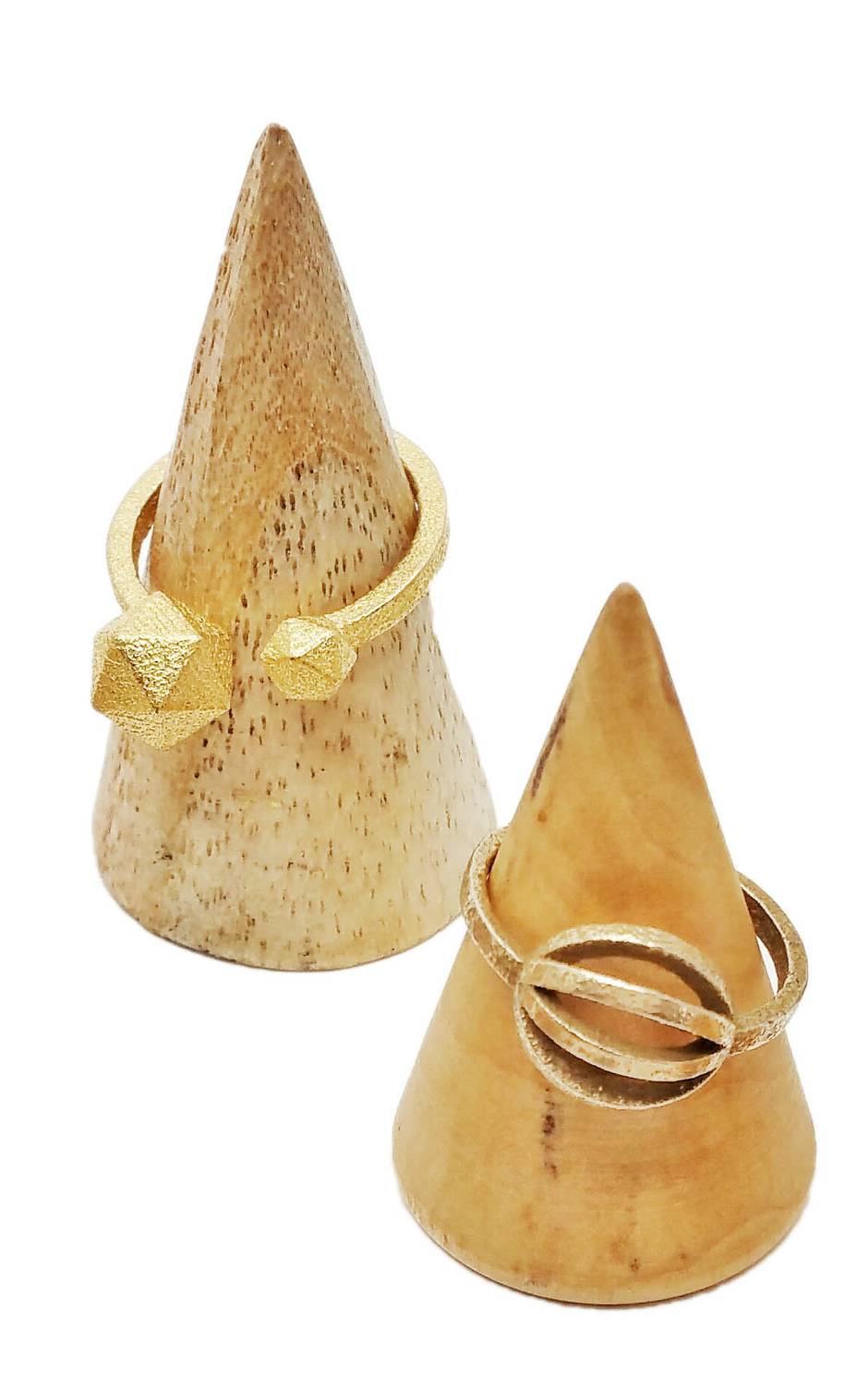 Vancouver-based Lana Lepper, of LanaBetty, is a designer who uses 3-D printing to create her wares. Of growing interest to makers, this technology is full of potential for wearable art. Lepper says each ring takes about six to eight hours of printing time. “The 3-D printing process has allowed me to incorporate the desire for clean lines, angles and geometric shapes in a way people haven’t seen before,” Lepper says. Her new line will be featured this year at IDSwest.

“I think customers are reacting less to diamonds and melting down their family gold,” says Winnipeg-based designer Alexandra Tumanov, 31, who has been a goldsmith for the past eight years. “This has allowed us to come up with different techniques that aren’t so traditional.”

The Great White North Exhibition of jewellery inspired by and made in Canada will be on display at 18Karat’s new showroom at 1156 Yonge Street in Toronto until mid-October.