Claire Haddad: A designer who made glamour comfortable

Claire Haddad, who taught herself to sew at the age of 10, achieved global success with her elegant, feminine designs. Here, she measures model Kathryn Fell for a peignoir set in 1959.

erik Christensen for The Globe and Mail

In the mid-1960s, fashion designer Claire Haddad's elegantly feminine creations were adored by Hollywood's top stars, including Elizabeth Taylor, who was possibly the most famous woman in the world at the time.

During a visit to Toronto in 1964, Ms. Taylor sent her assistant in search of a gown by Ms. Haddad. The Canadian designer was naturally delighted to accommodate the megastar but there was a problem: Ms. Taylor's measurements were top secret. So Ms. Haddad cleverly persuaded Ms. Taylor's assistant to sneak one of the actress's brassieres to her. The designer stuffed it with cotton wool to recreate the star's voluptuous bosom, then designed the dress on her adjustable Judy (a dressmaker's mannequin). The dress was cut on the bias to flattering effect. When Ms. Taylor slipped it on, she announced that she had never had a garment fit so perfectly at first try. Presumably the purloined bra was returned before Ms. Taylor noticed its absence.

Ms. Haddad, who died in her sleep on May 17 in Toronto at the age of 91, was a trailblazer in the world of high-fashion loungewear, sleep wear and lingerie.

In October 1965, her name and designs made the first of many appearances in the American fashion industry bible Women's Wear Daily. One U.S. journalist cheekily remarked that Canada could now be known for more than just igloos and ookpiks (the familiar Inuit handicraft toys modelled after the snowy owl). The quip was mentioned in a comprehensive blog by Ms. Haddad's daughter and granddaughter, Andrea and Hala Zabaneh that details Ms. Hadadd's early years and rise to fame.

Taking a phone call at her office on Spadina Avenue in Toronto, Ms. Haddad had been surprised to hear the voice of Diana Vreeland, Vogue's editor. The fashion doyenne requested an extra-long garment for the towering German supermodel Veruschka to wear for an upcoming issue of the magazine.

Part of Ms. Haddad's genius lay in recognizing that loungewear and lingerie, with modifications in design, could easily be worn to special events outside the home. To that end she created two separate lines. The tags on her lingerie read; "Claire Haddad lingerie is designed for the woman who wants to look feminine and feel fabulous. Pamper yourself – you're worth it." For tags on her lifestyle brand she wrote: "Lifestyle captures the excitement of contemporary fashion trends in easy comfortable garments that are unmistakably casual, glamorous – or both!!!"

The petite designer, who was barely five feet, was unmistakably glamorous herself. She believed a woman should make herself as elegant at home as she would in public while, at the same time, feeling comfortable.

The source of Ms. Haddad's inspiration was frequently the fabric that would lie against a client's skin. She either sketched a design on a photocopied figure or draped material on a Judy to create her own original pattern. An assistant helped with technical corrections before making a paper copy for the cutter. Using this method, Ms. Haddad produced two collections each year.

Since fabric played an essential part in her creative process, Ms. Haddad and her husband, who was also her business partner, travelled to the Orient several times each year in search of fine silks. Frustrated that she couldn't source suitable fabrics at home, the patriotic Ms. Haddad added a Canadian touch to her imported silks by commissioning artists to hand-paint them.

Ms. Haddad was a co-founder of the Fashion Designers Association of Canada, an organization that held fashion shows and worked to increase the exposure of its members, including Marilyn Brooks, Pat McDonagh, Leo Chevalier, as well as Ms. Haddad herself.

Ms. Haddad's work with the association and the global success of her fashion business were mentioned in the citation when she was named a member of the Order of Canada in 1979. At the award ceremony she sat beside Lily Schreyer, wife of then Governor-General Ed Schreyer. During an informal chat, the designer relayed to Ms. Schreyer a story about meeting a Canadian consul-general at a fashion show. Ms. Haddad said she'd been dismayed to learn that the consul-general wasn't wearing a Canadian-made garment. Shortly thereafter she received a call from Ms. Schreyer asking Ms. Haddad to pass along the names of Canadian designers she might otherwise fail to recognize.

Claire Margaret Bardwell was the second of five girls in her family. She was born on July 17, 1924, in Toronto where she grew up surrounded by the scissors, seams and sewing machines of the family business. Her mother, the former Rose Deratnay, a seamstress, had come to Canada at age 16 from Syria. Her father, Joseph Henry Bardwell had emigrated from Lebanon. An entrepreneur and salesman, Mr. Bardwell firmly believed in celebrating Canada and instilled that belief in his daughters. In 1938, he negotiated the exclusive Canadian rights for the use of Viyella, a soft English fabric that was ideal for making bathrobes and housecoats. His label Bard's (short for Bardwell) soon became a thriving brand with a factory in Toronto's garment district, on Spadina Avenue.

At the age of 10, Claire Bardwell taught herself to sew on her mother's machine, making herself and her sisters backless sun tops with spare fabric her mother brought home from their factory. She graduated from Earl Haig Collegiate Institute in 1940 but wasn't allowed to pursue her dream of studying fashion in New York. Instead, her parents insisted she remain in Toronto, where choices were limited. She took a one-year drafting course at Northern Vocational School (now Northern Secondary School). This was followed by courses at the Toronto School of Design as well as home study courses with the New York Fashion Academy. She also studied at the Galasso School of Design in Toronto, where she felt she learned a great deal. Her Italian mentor there was tough on her and she later learned that he was strict because he perceived her to be a great talent.

When she wasn't studying, she liked spending time at her parents' factory. Her father placed her drawing table in his office so she could eavesdrop and learn the business side of the garment industry. His daughter became adept at dealing with the factory workers who would turn her drafting patterns into garments, but what excited her most was designing high fashion.

In 1944, when she was just 20, Claire Bardwell married Albert Haddad, a Syrian immigrant. Their marriage, which lasted almost 70 years, produced two daughters, Lynn in 1947 and Andrea in 1951. Ms. Haddad continued her studies in fashion by employing a nanny. After she married, her father insisted on adding her name to the family label so that her creations became labelled "Bard's designed by Claire Haddad."

When Ms. Haddad's father died at the age of 54, Albert Haddad took over the running of Bard's until he and Claire decided to branch out into the lingerie business with a small factory on Richmond Street. An astute businessman, Mr. Haddad suggested they call their new venture Claire Haddad Ltd. He'd noted that fashion editors generally mentioned the designer's name rather than the company name. He also gave his wife sage advice. She once said, "Without him I would not have had the courage to explore my creativity. He always told me to look at fashion magazines then close them up and do what I wanted."

The Haddads were a complementary and determined team. Mr. Haddad managed administration and a sales force while Ms. Haddad worked closely with seamstresses. Ten sewing machine operators completed each garment. Nothing was mass-produced. The company was an instant success, gathering industry awards.

With the help of the Canadian trade commissioner, the Claire Haddad line of elegant loungewear, caftans and silk tops was well received in New York. The Haddads began receiving invitations to show their line in the U.S. occasionally getting a standing ovation. Hudson's Bay, Holt Renfrew, Eaton's, Simpsons and other high-end Canadian outlets took notice and began placing orders. 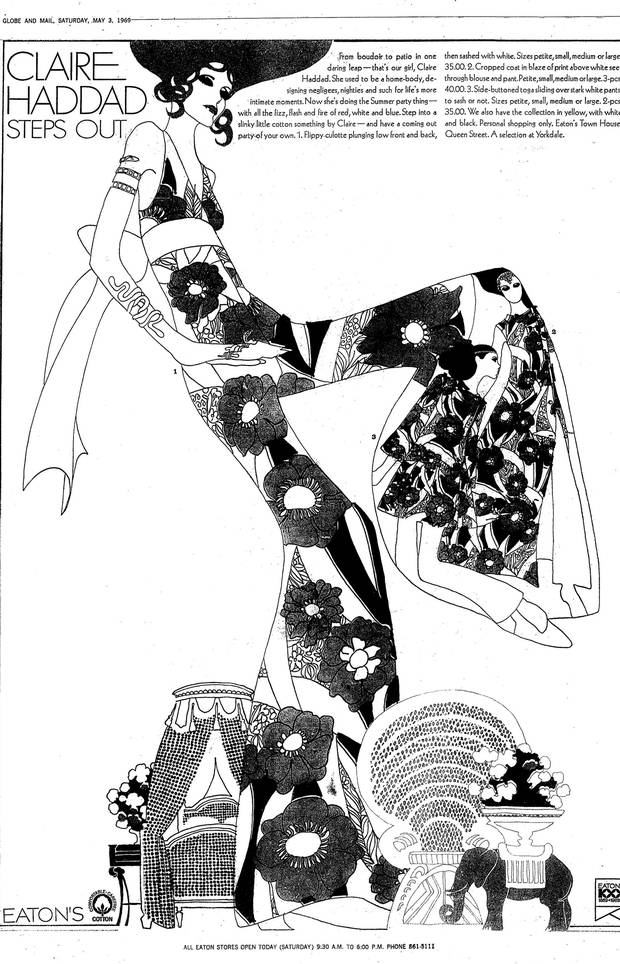 The Globe and Mail.

In 1979, the Haddads opened their own retail location in the tony Hazelton Lanes in Yorkville, followed by a second store in the new West Edmonton Mall. By the 1980s however, Canada's economy was in decline because of competition from cheaper manufacturing facilities overseas. Ever-astute, Mr. Haddad sought another Canadian manufacturer to license and produce their line. In 1984, an agreement was signed with Kayser-Roth Canada for a Claire Haddad division. Claire Haddad showrooms and sales offices were set up in New York, Chicago, Los Angeles and Dallas. Despite its initial success, the Kayser-Roth relationship was short-lived. It ended in 1985 when the Haddads learned that new management at the company had begun using inferior materials to finish their garments. Above all, the Claire Haddad name had to stand for quality. They decided it was time to retire.

A number of Ms. Haddad's creations are housed at the Royal Ontario Museum. A much more comprehensive collection of her work is stored at the School of Fashion and Merchandising at Seneca College in Toronto. To celebrate her 60th wedding anniversary, Ms. Haddad and her husband established an endowment fund at Seneca to assist promising young fashion students. While the company was still operating, the Haddad factory and showroom were always open to them. Ms. Haddad wanted the designers of tomorrow to know that success in a glamorous industry is achieved by plenty of unglamorous hard work.

Her daughters, Lynn and Andrea, five grandchildren, one great-grandchild and two sisters survive Ms. Haddad. She was predeceased by her husband, who died in 2014 at the age of 98.

"Claire Haddad's clothes reflected her own sense of what life should be; welcoming, beautiful and sensuous without ever being vulgar or overtly sexy," Joan Sutton Straus, author, journalist and former fashion editor of the Toronto Telegram once wrote. "She was absolutely the first designer in North America to bring fashion to 'at home' clothes."

A 1968 portrait of fashion designer Claire Haddad taken in Toronto.