The now-famous photograph shows a woman with long blonde hair, dressed for work in tall boots, a plaid skirt and a belted coat, her burgundy leather satchel charmingly hitched to the back of her bicycle. Ahead of her, other bikes crisscross the uneven bricks that make up the streets of Copenhagen.

The scene, captured in what is now called "the photo that launched a million bicycles," depicts what fashionable Danes have long known: how to commute with effortless style on two wheels. The picture was taken in 2007 by a Danish-Canadian photographer turned cycling advocate, Mikael Colville-Andersen, who posted it on his blog, Cycle Chic, to tremendous response. The blog's name has gone on to define the art of riding bicycles in fashionable attire.

Having long espoused the "why walk if you can ride" mentality, I am more than on board with it all. In my view and experience, you need not work up a sweat, sport special gear, don wicking fabrics or look anything less than your breezy summer-fresh self to engage in the kind of chilled-out cycling inspired by the cool folks of Denmark. (That said, one addition to this picture of elegant European style is a must: a helmet.)

After all, you are sitting down while riding a bike, making cycling theoretically easier than walking. On a warm summer morning, hopping on a bike is a wonderful way to start the day. And after hours behind an office desk, climbing back on it feels like a reward. The only hit my wardrobe tends to take is the occasional stretching of my ballet flats. My remedy is buying shoes that are a half-size smaller or wearing stretchy leather flats that keep their shape. And it is worth noting that it's much less painful, surprisingly, to pedal in high heels than it is to walk in them. I am not the only one who has figured this out.

In Toronto, where I live, many have embraced the cycle-chic movement, its anti-cycling mayor notwithstanding. On a typical weekday in the city's downtown core, an average of more than 20,000 cyclists hit the streets, according to municipal data. There and in other cities (Montreal, Portland, Ore., London, Amsterdam), the bicycle has become both a lifestyle-setting mode of transport and one of the most relevant fashion accessories of the moment.

"It represents so many positive things," retailer Jeffrey Scullion says, citing cycling's health benefits, its eco-friendliness and its growing trendiness. A global traveler, Scullion was so inspired by the collision of style and function in the world's top cycling cities that he dedicated himself to it, opening a haute-cycling shop in Toronto. Cycle Couture not only sells gorgeous imported bikes from Europe and California but also the lifestyle accessories, such as Italian leather satchels, that pair so elegantly with them. (See sidebar at right for more.)

"In Europe, people have been dressing up and going to work on their bikes for years," he says. "Even the Prime Minister of Denmark rides her bike to work."

Scullion's store was one of the first in Canada's largest city to carry the Commuter line by Levi's, which introduced pants, jackets and other items featuring reflectors built into cuffs, utility waistbands for hanging U-locks, reinforced crotch and pocket areas to prevent wear and tear and stretch fabrics for mobility and comfort.

Sweden's H&M is also getting in on the act, teaming up with cult London bike shop Brick Lane Bikes to create cycle-friendly clothes that are easy-wash, reflective and well-ventilated.

And last year, the men's-wear brand Strellson partnered with bike maker Bianchi to produce a limited-edition fashion line with both the boardroom and the bicycle in mind. Their Fixed Gear Suit, for instance, is stretchy, repels water and dirt and has reflectors built into its cuffs.

All this demand has been spurred by fashionable urbanites who want to cycle while preserving their look, Scullion explains. In his shop, men have come in search of bikes that can be outfitted with a rack to hold suits; women have picked up their new bikes wearing blouses in the same bright or pastel hues as their rides.

"The only thing you cannot wear on a bike," says Adrienne Shoom, who is the style director at Joe Fresh and who bikes to work most of the year on a fetching Old Dutch model, "is a pencil skirt – it's impossible, actually." On those days when such a skirt is required, Shoom dons shorts for her mostly downhill commute through Toronto's west end, then puts on the skirt at the office. And under certain summer dresses, she'll throw on her favourite Joe Fresh yoga shorts until she gets to work. "Sometimes, when you're sitting on the bike, even though your skirt isn't short, you have to hike it up," she says. "But I can ride in almost anything – flip-flops, sneakers, pumps, heel boots. When I come in to work, some people say, 'You rode your bike in that?' "

Last summer, I was stopped a few times while riding along Bloor Street by photographer Lincoln Clarkes, the veteran shooter who recently turned his lens on fashionable Toronto cyclists. "I shot fashion in the eighties and nineties," Clarkes said recently. "Once a fashion photographer, always a fashion photographer. And I mean, how could I not [shoot stylish cyclists]. They are just so delightful and environmental."

Especially chic Canadian cyclists just might find themselves captured mid-ride on Clarkes's website or in his forthcoming book (Cyclists, which comes out in June).

Part art tome and part time capsule, the new book performs a valuable service, as Clarkes sees it. "Most cyclists are here and gone in an instant," he says. "All that lingers is their sense of style, if they have any." 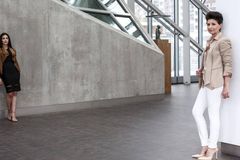 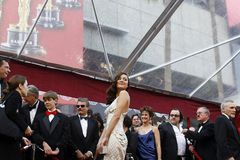 Stunning stripes: How the classic look has become hotter than ever
May 3, 2013 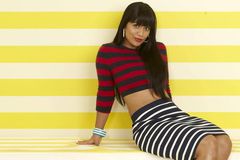