It may be churlish of me to highlight this during wedding season, but as scientist and jeweller Aja Raden points out in her cultural history Stoned, gemstones are "just colourful gravel." She elaborates on the fraught history and desire around precious objects – pearls, emeralds, wristwatches – with diamonds as one cautionary tale via Marie Antoinette, whose downfall was precipitated by jewellery. The human history of attraction to bright shiny objects has not exactly been about supply chain integrity or corporate social responsibility – instead, think envy, greed, violence, suffering, slavery, incursions and the guillotine.

To understand the role of gems and jewels in luxury today, it's necessary to consider, as Raden does, the brilliant "A diamond is forever" campaign that De Beers whipped up in 1947 after the South African diamond rush that saw the company gain control of 99 per cent of the planet's diamonds. It was about the creation of desire for what is fundamentally a ubiquitous carbon allotrope (as is graphite, like the pencil I use to make column notes). "An interesting quirk of the scarcity effect is that it doesn't require actual scarcity," writes Raden. De Beers success was about the perception of limited supply.

Rachelle Bergstein considers all this in Brilliance and Fire, her lively new book about diamonds, with particular attention paid to supply chain awareness, consumer politics and investigative journalism over the last 15 years. In 2006, journalist Greg Campbell's investigative book on illegal diamonds and the civil war in Sierra Leone, Blood Diamonds, was made into the feature film starting Leonardo di Caprio and Djimon Hounsou; by 2008, the De Beers group had countered with the launch of the Forevermark brand, marketed as "the world's most carefully selected diamonds."

Yet if the consumer's top priority when buying diamonds now, as Bergstein argues, is not carat size but the desire for conflict-free minerals, looking at what's behind the sparkle should extend beyond this particular jewel. Awareness and the move toward transparency has been slower to reach the marketing of gemstones, but has been in the works for the past few years with emeralds (which, as Raden outlines, are genuinely rare).

Colombia supplies two-thirds of the world's emeralds, prized for their distinctive deep green glow. Take designer Lorraine Schwartz's gobstopper Colombian drop earrings worn by Angelina Jolie to the 2009 Oscars – 115 carats and valued at $2.5-million – with a matching 65-carat ring worth another million. Since then, the Colombian emerald market has been on the rise; a 25-carat Colombian emerald ring by Boghossian sold by Christie's Asia last month went for $1.7-million (U.S.).

The natural resources company Gemfields has held auctions of both high- and lower-quality emeralds that achieved record prices this spring. It's the world's leading producer of coloured gemstones and also owns luxury jeweller Fabergé. In Zambia, the company owns the Kagem, the largest emerald mine in the world, but it is now expanding its reach to Colombia, with majority stakes in two mine projects there.

When it comes to marketing, the gemstone industry seems to be taking to heart the lessons the diamond industry learned the hard way; cultivating desire is first about integrity and transparency, where it used to be about scarcity. In Gemfields' ad campaigns, for example, the words "ethically sourced" or "responsibly sourced" come before the word "rare."

The mine-to-market traceability strategy isn't just for deep-pocketed behemoths like Gemfields. Victor Carranza, Colombia's controversial labourer turned billionaire emerald kingpin, died in 2013 (the same year Pantone's colour of the year was Emerald), and a new company called MUZO, formed by a group of American investors, bought full control of the Muzo mine the following year. It immediately began an ambitious overhaul of Carranza's formerly feudal system, investing to right its human rights abuses, questionable environmental practices and unsafe labour conditions. In March the parent company then launched the Muzo Emerald brand at BaselWorld, the annual luxury jewellery and watch trade show. As with diamonds, each gemstone will be documented and tracked. To promote the brand, the company collaborated with designers such as Solange Azagury-Partridge and Shaun Leane to showcase special emerald pieces at the luxury jewellery and timepiece market during The Couture Show in Las Vegas in June.

The company's goal is to rehabilitate and help successfully rebrand the Colombian emerald industry. That's if they can get past its bloody legacy – not just the one going back to the Spanish conquistadors of the 1500s but of the recent past. It's a true story that would make for a riveting Netflix series: During the 1980s green war, Carranza (at his heavily guarded estate in the Andean jungle) defended his emerald empire from a member of Pablo Escobar's drug cartel; by the time a peace pact between the cartel and mining families was brokered by the Catholic church, more than 3,000 people had been killed.

Contrast that with Gemfields and MUZO's websites, which greet visitors with videos and portrait series of mine workers, landscapes and community projects. Less formally curated, perhaps, but no less strategic is the ongoing social media presence. MUZO's Instagram feed features snapshots of its mine in the remote Boyaca mountains, the adjacent towns, moody elevator shaft cages, rough emeralds and portraits of people and workers in the community (who, since they practice the delicate traditional tunnel extraction method, are called "artisanal miners"). The same goes for other companies like Mensal, a smaller young Colombian-owned emerald trader. The scenic (and the pretty: raw emeralds) paired with a bit of grit emphasize provenance with well-intentioned authenticity.

But the history is a lot to shake off, and whether the revamp and transparency on display actually work remains to be seen. The South American emerald trade was the earliest form of arbitrage, bonds and betting futures. As lore has it, it's because of emeralds that green is also the colour of money.

The Globe Style guide to South America, the Rio Olympics and beyond
July 15, 2016 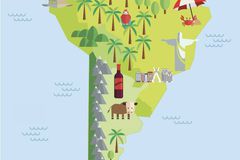