Fashion is a medium that courts the gaze – and so it only makes sense that the best fashion reads this spring are rich (and daring) in their visual devices. Globe Style rounds up the best of these image-heavy books and makes a case for close inspection.

After this winter’s Gods and Kings: The Rise and Fall of Alexander McQueen and John Galliano, it’s refreshing to survey a trio of books about individual designers that focuses more on their work and legacies than on their sins and peccadilloes. One, Inferno ($55, Laurence King Publishing), to be released in May, revisits the life of the tragic McQueen, but rather intriguingly chooses to do so through the prism of a single pivotal event in the designer’s career: a 1996 collection and presentation that many regard as “quite possibly the greatest fashion show on Earth.” Held in Christ Church in London’s East End, the show had a dramatic setting, blended couture with club clothing and introduced many of the signature elements (rawness, irreverence) that would resonate throughout his oeuvre. To take readers there, authors Melanie Rickey and Kent Baker talk to those who collaborated on the show, include revealing behind-the-scenes photos and feature “newly created imagery of clothes shown on the catwalk” for “insight into why this collection was so special.” It’s an innovative approach to decoding McQueen – and an effective one.

Charles James, the subject of Timothy A. Long’s Charles James: Designer In Detail ($48, V&A Publishing), wasn’t as edgy as McQueen, but he was just as innovative. As the thousands who thronged last year’s retrospective on James at the Metropolitan Museum of Art in New York can attest, James was a technical pioneer, his impossibly gorgeous evening gowns as meticulously constructed as a piece of machinery. In Long’s book, which comes out tomorrow and is the first in a new series by V&A Publishing, James’s virtuosity and “nearly fanatical perfectionism” are both addressed, suggesting that the first couldn’t have been possible without the other. Lush photos as well as elegant drawings by Leonie Davis do the garments, which were coveted by socialites and movie stars during the 1920s up until the designer’s death in 1978, full justice.

Finally, the couturier Marcel Rochas, who defined the female silhouette of the forties and fifties with his wasp-waisted bodices and exaggerated shoulders, may not be as widely celebrated as McQueen or James, but a new book, written by his daughter, aims to rectify that. In Marcel Rochas: Designing French Glamour ($95, Flammarion), Sophie Rochas covers her father’s 30-year career (which included the opening of two houses, a who’s who of clients and an army of workers) in a charming first-hand account that never descends into hagiography. Indeed, it is this intimate knowledge, plus the lavish photographs dotting the monograph, that make it out of the ordinary. Rochas died in 1955, and the brand is currently owned by Procter & Gamble. This book should do much to restore the master to his rightful place in fashion history. – Danny Sinopoli 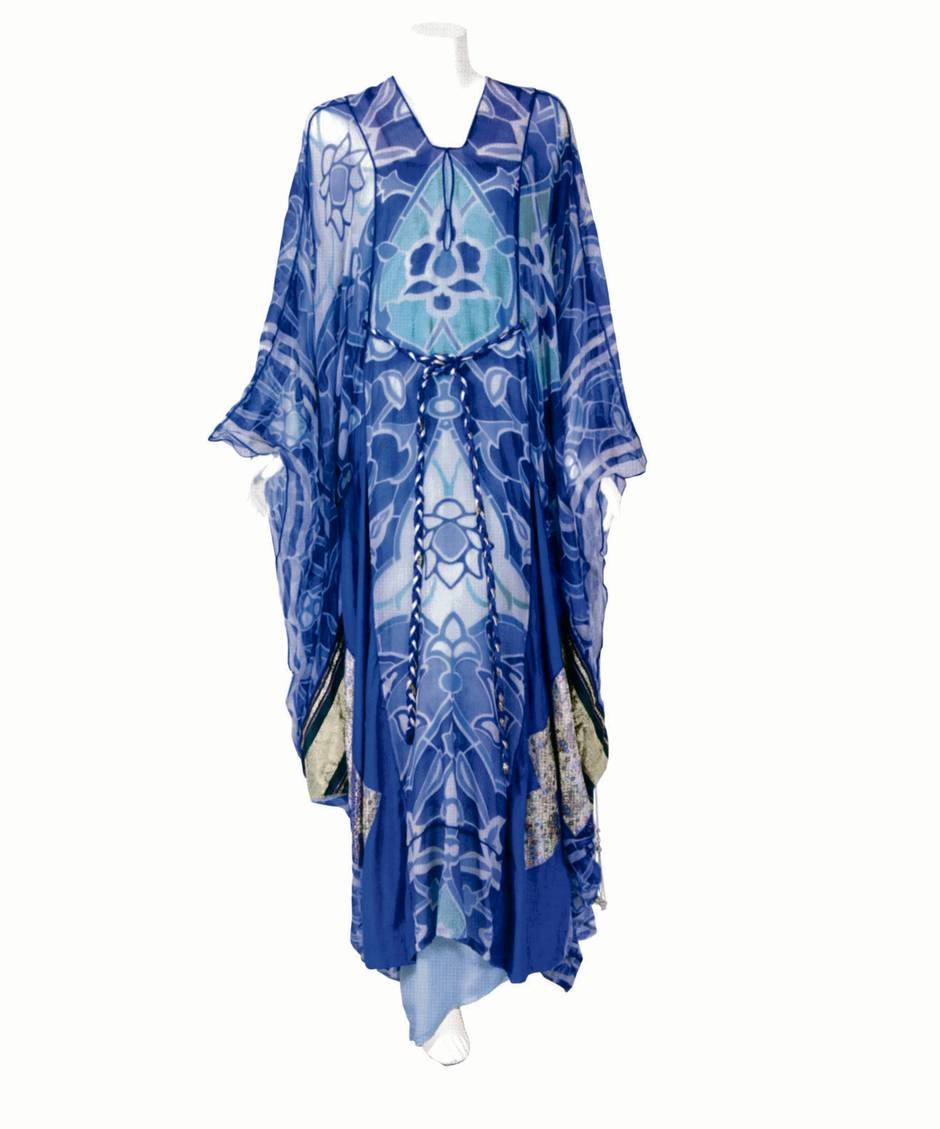 This Thea Porter abaya from the mid-1970s features a print based on Persian tile designs along with Damascus brocade patchwork corners that pool just above the hem.

The Jerusalem-born, Syrian-raised designer Thea Porter, who brought Middle Eastern chic to Europe and North America in the sixties and seventies and counted Elizabeth Taylor and Barbra Streisand among her many famous clients, had faded into obscurity for decades. A new book, Thea Porter: Bohemian Chic ($52, V&A Publishing), however, written by fashion historian Laura McLaws Helms in collaboration with the designer’s daughter – and an expansive show McLaws Helms curated at London’s Fashion and Textile Museum – is returning the designer’s work to the fore. Odessa Paloma Parker spoke to the writer about Porter’s dazzling legacy.

Why do you think celebrities were so attracted to Porter’s designs?

Most of her clothes were custom, so many trims and fabrics were unique to the customer, to emphasize good points and bring them out. She said her main goal was to make women feel beautiful – it wasn’t about following trends. And these women would say that even if they had closets full of couture by Givenchy and Saint Laurent, when they put on Thea Porter, they felt most like themselves.

I enjoyed the story in the book about how the hemline of Porter’s iconic Gipsy dress came about as a mistake made by her first seamstress. Thea loved the effect of the error – how does that speak to her as a designer?

Because Thea didn’t have a background in sewing and pattern-making, she was coming to it with a totally open mind. She felt she didn’t have to follow what had come before, and each dress didn’t have to be a certain way to be beautiful. She was open to chance and working on a collaborative level with the people she hired.

What in the book do you think will surprise people?

Porter wrote a memoir that nobody read, which I quote heavily throughout, so you get a real sense of her through her own words.

What mark do you think Thea has left behind on the world of design?

It’s the way she was able to rework traditional Middle Eastern garments for the West, such as the abaya – which is totally enveloping and usually black and for the desert – in sheer, sexy fabrics.

I love that she would take something simple from one culture and rework it into something completely different for another, but not in a negative way. It wasn’t taking just to take. It was taking from a loving place. – Odessa Paloma Parker 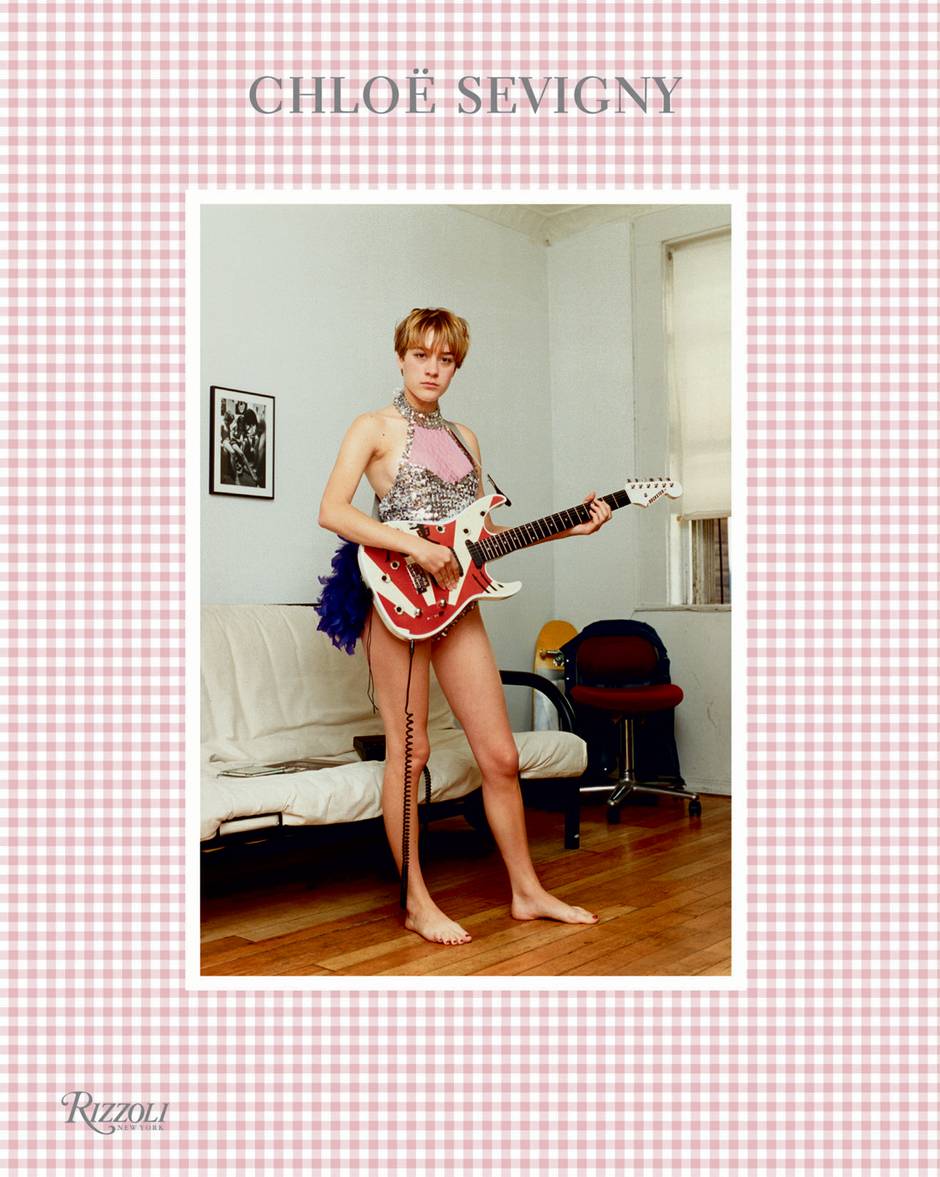 If Julianne Moore is the actress’s actress, Chloe Sevigny is the muse’s muse. The model/actress/fashion designer, who’s been renowned for her uniquely fearless personal style for more than two decades, is the subject of Chloe Sevigny ($35, Rizzoli New York), a new photo book tracing her changing looks through the years. The hardcover tome includes ad campaigns, magazine shoots, and – best of all – candid, never-before-seen personal photographs of Sevigny and her cool crowd. “Chloe was the reason for the reinvention of the horrible term ‘it girl’,” Sonic Youth’s Kim Gordon, herself a punk icon, writes in the book’s dreamyeyed foreword, while Orange Is The New Black actress Natasha Lyonne reflects on her years-long kinship with Sevigny in the afterword. The edition offers little else in the way of text, but its wealth of images has style to spare. – Maggie Wrobel

Between the covers of The Stylish Life: Yachting by Kim Kavin ($55, teNeues), glossy photos of tycoons, society boldface and celebrities from Cheryl Tiegs to Leonardo DiCaprio offer a glimpse of how the other 0.1 per cent lives when racing and relaxing on the water. As it turns out, they dress accordingly, setting sail in the crisp, now-classic palette of red, white and blue (and the occasional rumpled chino). In Nautical Chic ($45, Abrams), historian Amber Jane Butchart explores the naval and fishing origins of that palette, along with fashion staples such as peacoats, boaters and Breton sweaters, and traces our enduring obsession with them to a sporty knit jersey smock, inspired by the chandails of Normandy fishermen, that appeared in Coco Chanel’s clothing boutique in Deauville in 1913. Butchart reaches even further back to untangle the historical strands of the trend and organizes her reporting in chapters labelled by archetype (officer, pirate, sailor and so on) and backs up her findings with a rich array of historical drawings, vintage catalogue looks and photographs from contemporary catwalks. On the home front, Swedish textile designer and interiors stylist Anna Örnberg picks up on the theme in The Nautical Home ($16.99, Skyhorse Publishing), to be released in June. Her book offers pages of decor ideas, simple styling tricks and easy projects that will capture the waterfront feel even if there’s only dry land in sight. – Nathalie Atkinson 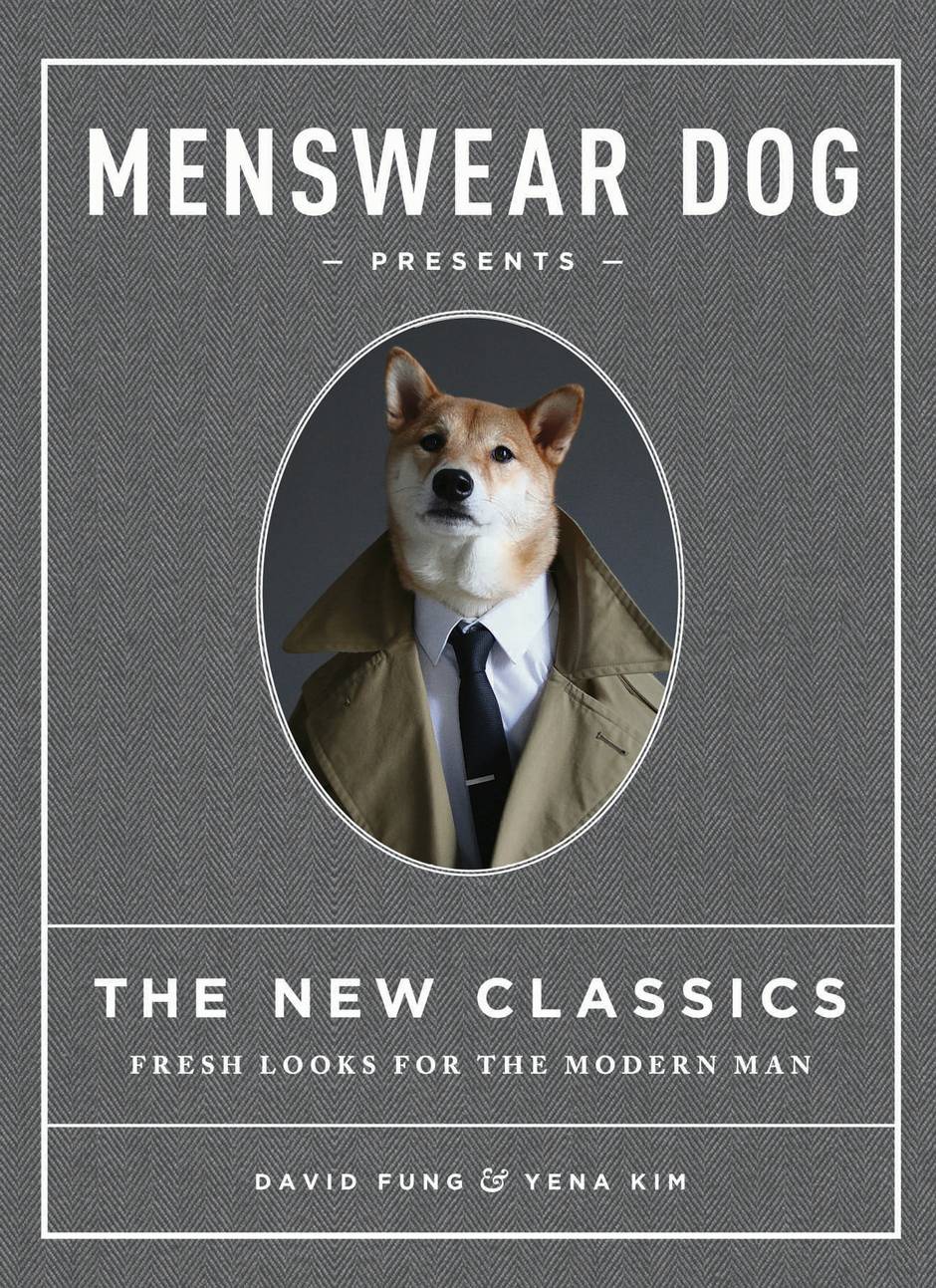 They say it’s the man who makes the clothes. The same, apparently, holds true for dogs. Or at least for Bodhi, the four-year-old Shiba Inu who is the star of Menswear Dog: The New Classics (Artisan, $16.95) and the popular Tumblr that inspired it. In the book, husband-and-wife writing team David Fung and Yena Kim along with their titular pet cover a good deal of serviceable ground, including tips for office dressing, packing and garment care, and an introduction to trusted brands that carry the basics. Helpful diagrams zero in on the nuances of good fit, and recurring Do’s and Don’ts lists resolve myriad styling conundrums. But all that is the mechanical stuff. The heart of the book is its canine muse, who is a true precision actor. Like the best of them, he conveys the totality of his character in a glint of the eye, a dip of the chin or the way he sets his jaw (often open – this guy smiles a lot). He even manages to challenge conventional standards of beauty: His neck, after all, is too fluffy for many of his tailored dress shirts and bow ties. And yet, somehow, it works, proving yet again that true style is one part dedicated wardrobe team, nine parts personality. – Melanie Morassutti 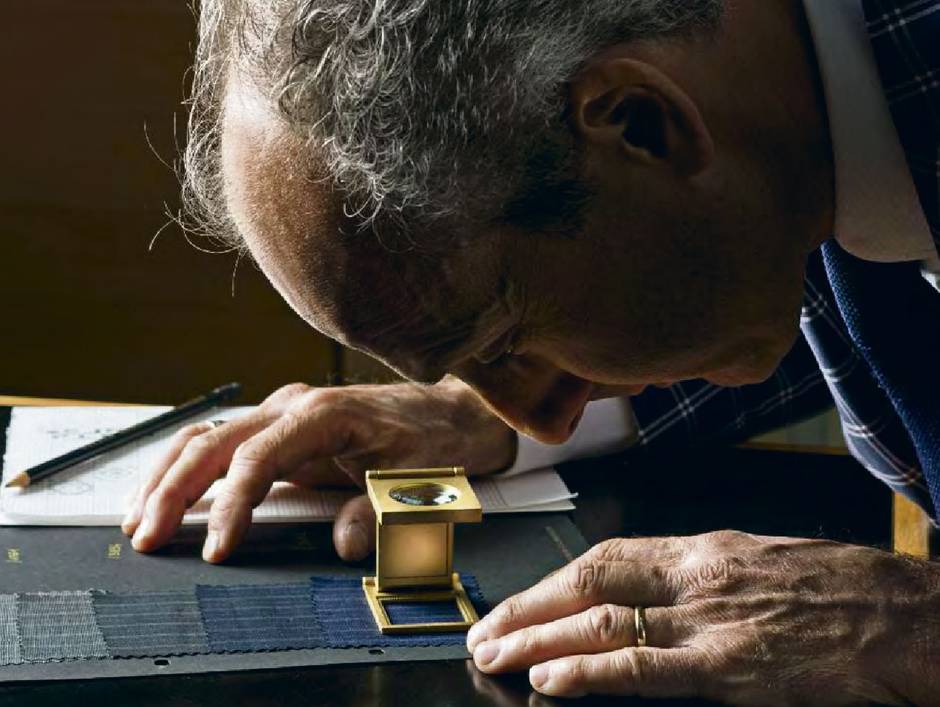 A fabric designer at Vitale Barberis Canonico inspects a set of samples from a collection that dates back centuries.

The distinguished menswear historian G. Bruce Boyer, a former editor at Esquire and GQ, has written several books on fashion, but his latest, The Fabric ($45, Skira), goes right to the source: the 350-year-old woollen mill in Biella, the foothills of the Alps, that is the oldest continuously operating factory in the world. The Vitale Barberis Canonico mill produces more than seven million metres of fabric a year, from lush wool flannel to Prince of Wales check, and is purveyor to many, supplying Savile Row stalwarts such as Gieves & Hawkes and a host of off-the-rack brands from J.Crew to Tiger of Sweden. The weaver has remained consistent over 15 generations, and though it now uses the latest high-tech warping machines, every centimetre of material it produces is still inspected by human hands. It also still relies on its centuries-old collection of swatches for inspiration. This slim volume spotlights 10 of them as interpreted by photographer Fredi Marcarini, but the best part of the book is Boyer’s essay on fabric and the crucial role it plays in tailoring as a catalyst for creativity. – Nathalie Atkinson