The Coach headquarters sit on the crest of a hill on West 34th Street amid the dust and construction noise of New York City's massive Hudson Yards red redevelopment. The building is the same midtown address that housed the brand's original workshop when it launched in 1941 – Coach will begin rolling out its 75th anniversary offerings during fashion week this September – although its offices now occupy the whole building.

Around back, an unmarked door leads to a tidy, hushed space stocked with meticulously organized handbags and billfolds, which will be an invaluable resource for the label as it heads into its next quarter century. Like many fashion companies trying to stand out in a luxury market increasingly fixated on authenticity, Coach has recognized that its rich history – and this in-house archive – is its secret weapon.

Greeting me at the mini-museum's discreet entrance is Jed Winokur, Coach's senior archives manager. He arrived at the company nearly seven years ago and got to work reorganizing its cache of merchandise and ephemera in climate-controlled display cases built to the preservation standards of the International Council of Museums. Their glass construction allows the design and branding teams easy access to the collection and all new employees visit the space during their orientation to be immersed in the house codes.

It's one of the first places British-born Stuart Vevers visited in 2013 when he was appointed executive creative director. "It tells you the story of the brand," Vevers explains from his Big Apple office, before admitting that he initially – and deliberately – looked away from the archive so that the industry felt an emphatic change of direction when he took over the label. When he finally went digging for inspiration, the era that resonated most with him was 1962 through the 1970s, when American sportswear designer Bonnie Cashin joined the brand and created its distinctive point of view. "Things start to get more feminine, more playful, colour is introduced," he says.

It's easy to trace last spring's enthusiastically Instagrammed pink and mint-green fun fur yeti coats back to Cashin's witty spirit. Her appreciation for functionality is felt in this fall's lineup of Shadow bags. While some products, like the recent special-edition Coach Originals collections are literal iterations of archival pieces (and, as legend has it, Coach's turnlock hardware was inspired by the convertible top fasteners on Cashin's own sports car), Vevers prefers to use the classics as a starting point for subversion. Describing fall's accessories he says, "they've got that kind of speed and ease, and they're definitely inspired by the great Coach bags of the 1970s, but put through the spin cycle of our cool biker girl of the season."

Coach isn't the only brand that's recognized the strategic value of a well-catalogued brand story. The recent revival of Schiaparelli in Paris was made possible by the extensive archives purchased alongside trademarks by new owner Diego Della Valle. In the recent documentary Dior & I, Christian Dior creative director Raf Simons is seen sifting through sketches and swatches of the 1947 New Look collection before debuting his first haute couture collection for the house. While many labels might not have curators like Winokur on staff, that doesn't mean someone isn't charged with keeping track of their history.

When I reach freelance fashion archivist Julie Ann Orsini on her mobile, she can't tell me whose archive she's standing in at that moment – discretion is essential in this business – and only admits that she's in a warehouse, "somewhere in New York City." After working as a fashion journalist, Orsini decided to go back to school for a master's degree in costume and museum studies in 2006 and landed a job working as an archivist for Tom Ford. In 2011, she founded her thriving niche business, The Wardrobe, which curates collections for private clients and designers including Jason Wu and Proenza Schouler.

Because of the price of preservation materials and storage, archives are expensive to run, but Orsini argues that cataloguing heritage not only builds creative capital, it's good for business. "It's really about taking the long view, because there is so much interest in archives now and myriad ways for them to leverage it and turn it into a working asset," she says.

"They can [use the archive to] collaborate with celebrities and for red carpet appearances and retail partner collaborations. Things can be in store windows, books, exhibitions – I mean, the list goes on," she continues. "I was walking by Bergdorf's a few weeks ago and all the windows are inspired by China: Through the Looking Glass, the show at the [Metropolitan Museum of Art's] Costume Institute." The retailer had pulled pieces from past collections of the designers it carries to create the vignettes. "If those houses didn't have archives, it wouldn't happen. It would be a missed opportunity." 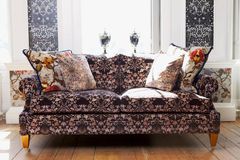 Fall’s best new fragrances offer lush garden scents
September 9, 2015
Fashion: This fall, say hello to a funhouse of acid hues, plush textures and reflective surfaces
September 11, 2015
Follow Nathalie Atkinson on Twitter @NathAt
Report an error Editorial code of conduct
Due to technical reasons, we have temporarily removed commenting from our articles. We hope to have this fixed soon. Thank you for your patience. If you are looking to give feedback on our new site, please send it along to feedback@globeandmail.com. If you want to write a letter to the editor, please forward to letters@globeandmail.com.
Comments