I wanted, not too long ago, to buy a new suit, one of those sleek, trim-fitting Mad Men numbers that are all the rage today. If you plan, now that the holidays are over and sale mania has begun, to also buy such a garment, I would like to offer the following advice:

Do not, as you may have been doing all your life, walk into an elegant men's store and say: "I'd like to buy a slim suit; I'm normally a 42 regular or possibly a 44, given how much I ate over the holidays." Do not do this and insist on actually trying on a 42 or a 44, which refers to your chest size.

I attempted to do it recently at the Hugo Boss store on trendy Cumberland Street in downtown Toronto. It's a sleek place full of rakish clothes and I often pass its full-length windows and long for one of its trim, feldspar-grey suits, thinking as I lust: Hmm, that would be just the thing to wear to a party in the early evening. The fact that I think I can afford a suit solely for early-evening parties, whatever they might be, gives you a sense how deep a man's shopping fantasies can run in the course of a walk down the boulevard.

In any event, the slim suit has become the norm over the past couple of years. The trousers are narrower, flat-fronted, often cuffless and non-breaking (that is, shorter), with a lower, skankier rise. The matching jackets have tight sleeves and high-cut armholes, softer shoulders, skinny lapels and an inch-and-a-half-shorter hem. It's all cut dangerously close to the body in an off-the-rack and even slightly ironic approximation of English bespoke tailoring.

The suits are often worn with pointy winkle-picker shoes that extend far, far in front of the toes, like peninsulas or penis extensions or the prows of a brace of racing sloops. In its more extreme and fashion-forward form, the suit appears to have been worn and shrunk in the washing machine while still on the body. The infantilized Pee-wee Herman comes to mind, not (ever) in a good way.

So there I was just before Christmas, early on a Monday morning, looking for such a suit. Outside the store, it was snowing, and nice, brisk pre-holiday optimism swirled in the air. Inside the store, a fellow named Rob was helping me find a modern Mad Men suit in my size.

Rob was a handsome fellow in a black, ultra-skinny suit of his own, a white shirt and a skinny black ruler of a tie. Profile was all: He looked like a cross between a penknife and a mail slot. His stubble and hair style suggested he had been hung gracefully upside down after rising from bed, an event that had apparently taken place half an hour earlier, after quite a lot of sex. Ron looked like he had sex all day long.

I insisted on trying on my usual jacket size, a 42/44. I had a hard time getting my arms down the sleeves, and was secretly relieved I hadn't worn a watch. I was able to get the jacket button closed, but could not then breathe. The overall effect in the 19-way mirror was of a balding Italian dessert. I resembled all of Tweedledum and at least part of Tweedledee as depicted by Sir John Tenniel in Lewis Carroll's Alice's Adventures in Wonderland.

"To be honest with you," Rob said, "the guys who come in are already skinnier. The bulkier guys, I think, are a little intimidated: They go to your regular store, for the more moderate cuts." This was another way of saying that, if you were born shaped like an anvil, you are, these days, an irretrievable dork. And there is nothing we block cuts can do about this until the fashion for men with chests like Bob Cratchitt swings away again.

"I think we have a few 48s," Rob said, his face bracing with alarm. "But we keep them downstairs in the basement." Where they won't frighten the regular customers, he might have added.

More or less the same thing happened at Harry Rosen. The 42 in the zestier and groovier Z Zegna line turned my trunk into a Calabrian salami and sent my barely covered backside jutting into the room like the eastern syncline of the Rocky Mountain plate. The 44 and the 46 both fit, if you like the tightly wrapped ham look, but so (illogically) did the 42 in the less severely nipped Zegna line. (I should point out that, at 43 inches, my chest measurement has been unchanged, if redistributed, over the past 20 years.)

The last jacket I tried on was a Tom Ford peak-lapelled charcoal-grey worsted with a cutaway-spread front below the waist: a 46, a great fit and $5,049. But at size 46, you are by definition well out of slimmy slimmereeno territory.

Men's jacket sizes, in other words, have shifted - the equivalent of the famous resizing of women's dresses a decade ago, when a size 2 became a size 0, a size 6 became a 4 and on up the line, so that women were flattered into buying "smaller" or "thinner" sizes. Men's suits, though, have morphed in the other direction.

What this means is that a stringbean who used to wear a 36 can now boast about his 40-inch chest, whereas a slab like me - who at 42 inches was never going to be able to wear a skinny jacket anyway - is out in the suburbs wearing a 48 and afraid to go anywhere but the golf course or the couch.

The effect of this false-sizing is bewilderment. Without the sturdy target of a reliable known size to look for, I felt myself disappearing down the drain-sucking vortex of fashion anxiety, becoming more and more dependent on the opinion of my Rosen salesman.

His name, incidentally, was Adam, as in God's first man. He was 33 and wearing a made-to-measure (that is, off-the-rack, but individually tailored) navy-blue pinstriped suit by Samuelsohn, a local Toronto brand. It was a beautiful suit, fitting trimly in the chest and high-cut arms and having a slim profile. Because of its elegant draping, though, it avoided the pinned-butterfly look that so many slim-cut suits impart to their wearers.

It was then that I realized it wasn't a Mad Men suit at all, but a classic British-American cut - trim in the waist and chest, but graceful and giving where it needs to be. Such suits costs 20 per cent more, but that's a lot cheaper than it will be to replace all your suits when Ermenegildo Zegna and his fellow designers change their minds next season about how slim suits should be. The comfortable British-American style fits the body, rather than the times.

I complimented Adam on his suit. "It's the gentleman's look," he said, referring to its name in the garment trade. Who knows? If more of us wore it, more of us might start behaving like gentlemen, too. 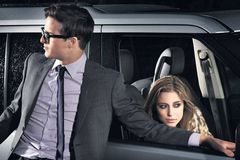 Nose hairs, wardrobe and his mom: Women fess up to man makeovers
October 26, 2011 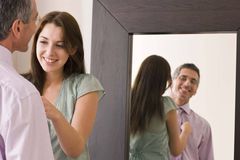 Don Draper's no slouch
September 4, 2009
Follow Ian Brown on Twitter @BrownoftheGlobe
Report an error Editorial code of conduct
Due to technical reasons, we have temporarily removed commenting from our articles. We hope to have this fixed soon. Thank you for your patience. If you are looking to give feedback on our new site, please send it along to feedback@globeandmail.com. If you want to write a letter to the editor, please forward to letters@globeandmail.com.
Comments