Quick, make a list of what you consider the world's most iconic dresses. Mine would include:

2) The LBD designed by Hubert de Givenchy and worn by Audrey Hepburn as Holly Golightly in the 1961 classic Breakfast at Tiffany's.

3) Elizabeth Hurley's Versace safety-pin dress, which made her instantly famous when she wore it, on the arm of then-boyfriend Hugh Grant, to the 1996 premiere of FourWeddings and a Funeral . (You start to understand the significance of an iconic outfit when you see it worn by someone else, as this one was last month by Lady Gaga. The image didn't compute because Hurley wasn't wearing it, although only Gaga, ever the identity-is-costume queen, could have so shrewdly manipulated the cultural memory, drawing attention to herself for being the "wrong" face and body in a dress.)

4) The Anthropologie Sweater and Leggings with Over-the-Knee Boots, worn near Yonge and Bloor Streets in Toronto circa early 2010, in a scene that involved too much wine, lots of laughter and the man who would become the love of my life. (Oh, pardon me, I'm thinking of The Iconic Costumes of Me, which we all have. There can't be any woman alive who sashayed through the eighties and doesn't have an embarrassing memory of owning some big-shouldered power-suit in which she was articulating, however subconsciously, the misguided feminist have-it-all mantra of that moment.)

In fact, thinking about your own Iconic Costumes of Me helps to illustrate why something worn becomes indelibly bookmarked in the imagination: It's an item that will later trigger a memory of place, person, event, emotion and identity. "Fashion is what time looks like," Isabel Toledo once said. And she would know: The Cuban-American designed Michelle Obama's much-talked– about pale-yellow inauguration dress in 2008.

The notion of iconic dresses is, it seems, a popular one these days. In its October issue, Vogue composed its list of 20 such gowns (the Hurley safety-pin dress was on it, as was Cinderella's pale blue ballgown from Disney's 1950 version of the fairy tale). Last year, Hal Rubenstein, fashion director of InStyle magazine, published the book 100 UnforgettableDresses . And Valerie Steele, director and chief curator of the Museum of the Fashion Institute of Technology in New York, chose what she considers the 100 most iconic dresses of the 20th century for her 2011 tome The Impossible Collection of Fashion. "I was looking at the seminal dresses that had an amazing influence on the subsequent history of fashion," she says on the phone from New York. Among them were a black silk-taffeta number with a fish train by John Galliano for Dior (1997), an evening dress in cigaline by Marc Bohan for Christian Dior (1972) and, her favourite, Hussein Chalayan's table skirt from 2000. (The only frock that both she and Rubenstein cited was Hurley's.)

Aside from the simple publishing and curatorial format that list-making provides, compiling iconic dresses is a result of our increasingly visual "who-are-you-wearing?" world. More important, it also reveals the growing importance of wardrobe as cultural artifact.

For five years, guest curators Deborah Nadoolman Landis and Sir Christopher Frayling tracked down over 130 of the most iconic outfits in film – from Cecil B. DeMille to Avatar – for the exhibition Hollywood Costume, currently on view at the Victoria & Albert Museum in London. "Hollywood doesn't have a wardrobe museum," Frayling, professor emeritus of cultural history at London's Royal College of Art, says in a phone interview. "And most studios junked [their costumes]." But that's all changing. Last year, actress Debbie Reynolds, who had accumulated over 3,500 movie costumes when studios were purging their prop closets, sold some at auction.Monroe's "subway" dress went for over $5.6-million. "It's big stuff now," Frayling says.

He also maintains that costume designs, especially for period films, have to be cunning, creative interpretations. For example, Keira Knightley's costumes in AnnaKarenina, hitting theatres this month, "are as much of this year as they are of 19th-century Russia. How fitted the dresses are, how thin Keira is – these are all very modern." Accordingly, Banana Republic has launched a special Anna Karenina collection, curated by the film's costume designer, Jacqueline Durran.

According to Frayling, the modern silhouettes and other features of much film costuming are intended to engage viewers in the story. "You look at Joseph Fiennes's leather jerkin in Shakespeare in Love and say, 'Yes, it's Elizabethan,' but he's wearing it like a 1990s leather jacket," he says.

Where movie costumes are similar to fashion is how they underscore and even create character. A classic example is Charlie Chaplin. In his biography, Chaplin describes how the iconic character of the tramp was created accidentally when he went into the props room and tried on trousers that were too big, a bowler hat, a jacket that was too tight and oversized shoes. Suddenly, he morphed into someone else.

Well, who hasn't done the same thing when searching for the self du jour? I would never wear a suit to interview a rock star. But I might wear one to meet with my book publisher, if I wanted her to think I was efficient and unlikely to collapse in tears when facing hellish deadlines. Clothing is armour with which to do image battle, to be who we want to be or think we are.

Which explains a fantastic sleeveless white cocktail mini-dress with a marabou-feather hem that I bought back in the early 1990s. I was an exhausted working mother of three young boys and I figured that I could shuck all that domestic weight with a garment change. I never wore it. That dress was the Iconic Fantasy Me, not Real Me. Still, I held onto it for more than a decade, trying it on periodically. It was a thing of hope more than anything else, of the knowledge that a new character was always nearby, just lurking in the closet. 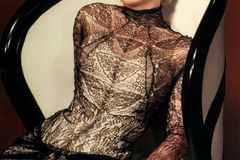 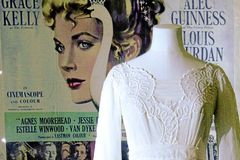 Audrey Hepburn's Tiffany's dress tops bid estimates
December 6, 2006
Follow Sarah Hampson on Twitter @Hampsonwrites
Report an error Editorial code of conduct
Due to technical reasons, we have temporarily removed commenting from our articles. We hope to have this fixed soon. Thank you for your patience. If you are looking to give feedback on our new site, please send it along to feedback@globeandmail.com. If you want to write a letter to the editor, please forward to letters@globeandmail.com.
Comments