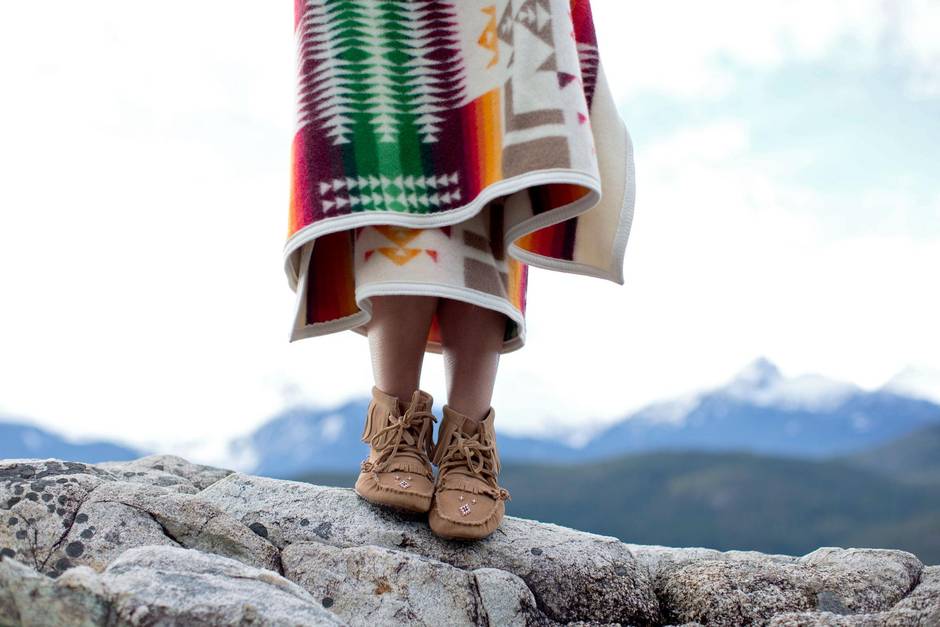 
Manitobah Mukluks is a brilliant model for Aboriginal business – and the fastest growing footwear brand in Canada. Danny Sinopoli reports


When the Métis entrepreneur Sean McCormick went into the mukluk business in the early 1990s, he had no intention of becoming a Canadian Aldo Gucci, but then celebrities such as Kate Moss and Megan Fox started getting photographed in his footwear. When the inevitable consumer demand followed, he launched Manitobah Mukluks in 2008, outfitting his traditional, meticulously beaded shoes and boots with city-friendly rubber soles and attracting the attention of high-end retailers such as Holt Renfrew and Nordstrom. Before he knew it, McCormick was at the helm of a bona fide luxury label, not to mention the fastest-growing footwear line in Canada and a model of Aboriginal success.

That last identifier is especially important to him these days, when media coverage of Native Canadians focuses almost exclusively on the negative, such as poverty, dead or missing women and the “cultural genocide” cited just last week by the Truth and Reconciliation Commission probing residential-school abuses.

Against such a barrage, it is vital, McCormick said in his Winnipeg office not long ago, “to present an alternative, more hopeful reality, to say to Native people and to the world, ‘This is what we can do.’ I want our success to have a domino effect.” 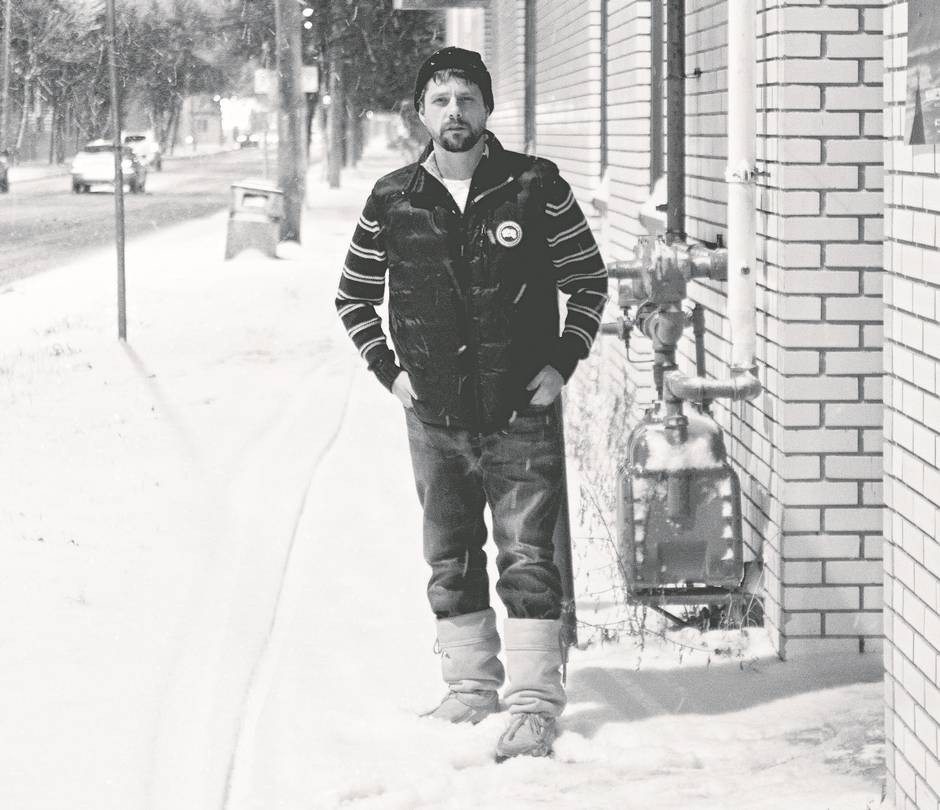 He’s off to a pretty good start. After British supermodel Moss was shot by paparazzi in a pair of MM’s calf-high, fur-trimmed mukluks (it isn’t clear how she came upon them – the company didn’t and still doesn’t advertise), other celebrities, including Fox, Jessica Biel, Justin Timberlake and even Britain’s Prince Harry, who bought a pair for then-girlfriend Cressida Bonas, made the brand a talking point. As a result, Manitobah Mukluks has seen its revenue, according to last year’s Profit 500 list of the fastest-growing companies in Canada, increase by a remarkable 290 per cent between 2008 and 2013, making it the fastest-growing footwear brand in the country. Today, MM mukluks and mocs can be found in top-end retailers such as Holt Renfrew, Nordstrom and Neiman Marcus, while online sales stretch to nearly 50 countries, from Russia to Japan.

In 2013, McCormick moved the company’s operations to a 40,000-square-foot building on Métis-owned land in Winnipeg’s Point Douglas neighbourhood, where, he pointed out during a tour of the facility, workers manning 22 sewing machines stitched together and embellished more than 3,000 pairs of mukluks last year. This year, that number is projected to grow to 4,000 pairs. 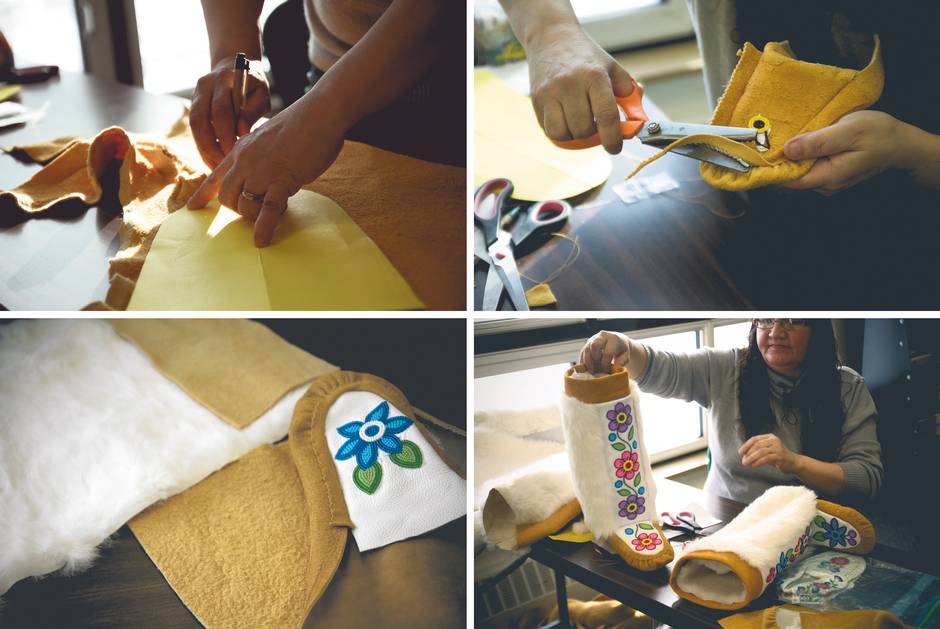 The company’s employees craft its hand-stiched and -beaded wares. (Vincent Tsang for The Globe and Mail)

Because of the brand’s rapid growth, McCormick began outsourcing some footwear production to factories in China and Vietnam in 2012, a move that proved controversial among some patriotic fans, but which, he insists, hasn’t compromised quality. “I am deeply involved with the overseas facilities,” McCormick said, noting that he travels to Asia at least four times a year. “The beading is done by hand over there just as it is here.”

According to Waneek Horn-Miller, the statuesque former Olympic water-polo player who serves as an ambassador for the brand, the fact that a Native-owned business can sustain multinational operations is something to celebrate, considering “the many challenges facing our people” today.

Even more significant, she said after the tour in Point Douglas, is the pride and opportunities that Manitobah Mukluks is restoring to a wide range of Native Canadians, from the elders and artisans the company collaborates with through its boutique Storyboots line (a range of limited-edition footwear, the proceeds of which go entirely to the makers) to a younger generation being introduced to traditional craftsmanship. 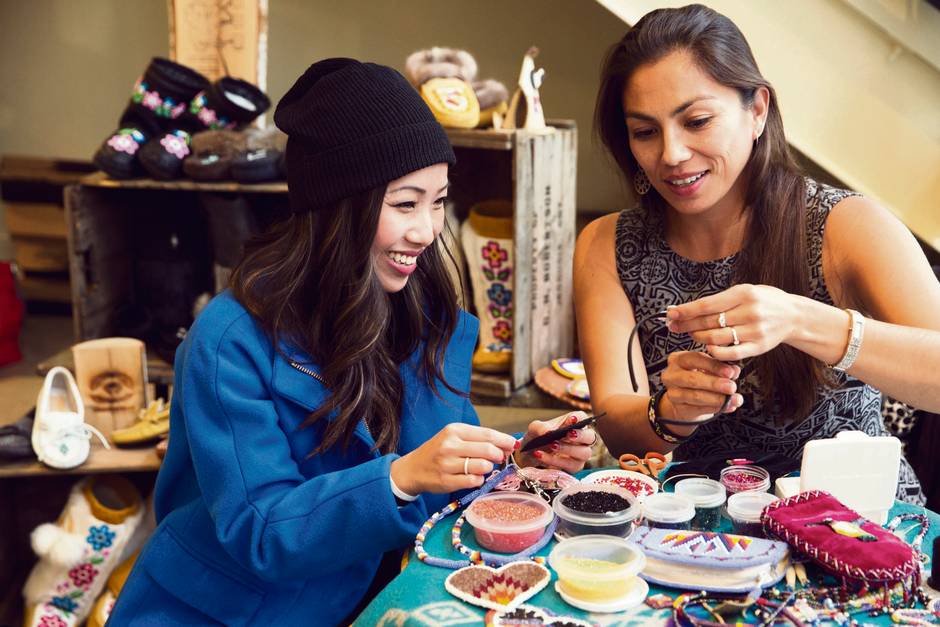 Mohawk sewer and designer Christine Bomberry (right) shows blogger Natalie Ho how to bead during a Storyboot demonstration at Toronto’s Gravity Pope, a boutique that carries the brand. (Courtesy of Manitobah Mukluks)

“There has been an explosion in beading among young Native people,” said Horn-Miller, who is Mohawk. Her assertion was brought to life on the second floor of the company’s Winnipeg hub, where Marilyn Tanner-Spence, an Aboriginal craftswoman who owns a number of Native craft shops around Manitoba, was overseeing a beadwork class for about a dozen enthusiastic teen and tween girls on a weekday afternoon.

“I love coming here,” one young participant said as she worked on her beading. “I really get to focus and to create.”

Besides overseeing such classes, Manitobah Mukluks also sponsors an annual bursary that enables select Native students to attend college or university. The effort is in tandem with Winnipeg’s Centre for Aboriginal Human Resource Development, a main beneficiary of the brand’s philanthropy. “Our hope,” the company says, “is to bring self-determination to all Aboriginal people through improved literacy skills and training for new career paths, including working at Manitobah.”

The brand’s future growth is clearly top of mind – and with good reason. Over the past few years, Native motifs have been having a moment in style circles, as evidenced most notoriously in the DSquawed collection by Milan-based DSquared2, the fashion brand overseen by the Canadian-born twins Dan and Dean Caten. For McCormick, who is trying to improve Native lives through commerce and education, such efforts ring hollow and border on offensive, but may have a silver lining. “The hopeful part that comes from these blunders,” he said via e-mail last week, “is the swell of consumer support that is directed to authentic Aboriginal fashion and collaborators thereafter.”

And those collaborations keep coming for Manitobah Mukluks. According to Tara Barnes, the company’s director of brand development and public relations, “we continue to grow with Nordstrom in Canada and in many of its northern [U.S.] locations, such as Chicago, New York, Seattle and Minneapolis. This coming fall, we will also be found in their kids’ departments with our brand-new children’s mukluks.”

Just last week, Barnes added, Holt Renfrew confirmed that it will be partnering once again with MM through its H Project, the retailer’s program to promote luxurious artisanal products from around the world. “It is a product we are proud to carry,” Holt Renfrew’s Alexandra Weston, who oversees the H Project, said of MM’s boots and moccasins.

“To have an incredibly well-made, high-quality product, where you know exactly who touched it, how many hands, is the height of luxury.”

Situated on 1,200 acres of lakeside Osoyoos land in British Columbia’s Okanagan Valley, Nk’Mip Cellars was North America’s first Aboriginal-owned and –operated winery when it was established in 2001. Today, the award-winning label produces a wide range of acclaimed varietals, from pinot blanc to icewine. In 2012, Nk’Mip Cellars had an impressive showing at the Wine Access Canadian Wine Awards, acquiring 14 medals in total, including No. 1 Winery in British Columbia and No. 2 Winery in Canada.

Created in collaboration with First Nations artists such as Andy Everson, Mark Preston, Steve Smith and Corinne Hunt, Hill’s art and furnishings merging the rich mythology of West Coast Native culture with a contemporary design aesthetic have garnered a big fan base. Dr. George MacDonald, director of Simon Fraser University’s Bill Reid Gallery of Northwest Coast Art, has hailed Hill’s output as “the next phase in the development of Northwest Coast art and design.” One of her pieces, a signing table, was recently installed in Canada’s High Commission in London.

Winnipeg jewellery designer Charbs received national exposure earlier this year when country singer and Juno nominee Crystal Shawanda wore some of his Native-influenced pieces during the awards show. Charbs’s earrings, necklaces and other designs are characterized by their bold colours and shapes and intricate beadwork. “I want to take our traditional fashion beyond the powwow ground but maintain the respect,” he told the CBC. The 27-year-old, who is from the Pine Creek First Nation, plans to open his own boutique later this year.