Justin Trudeau and Sophie Grégoire-Trudeau arrive for the opening ceremony of the Commonwealth Heads of Government Meeting in Valletta, Malta on November 27, 2015.

Sophie Grégoire-Trudeau, a self-declared advocate for Canadian style, has already demonstrated sartorial influence on under-the-radar labels (the Sentaler coats she's worn at Rideau Hall and Buckingham Palace have purportedly become bestsellers), so she likely understands that her American debut at the White House state dinner on March 10 is a potential career-making moment for a fledgling designer. In anticipation of the event, Janna Zittrer asked five nominees for this year's Canadian Arts & Fashion Awards to reflect on the value of dressing the Prime Minister's wife, and the look they would create for her, given the chance

JANNA ZITTRER
Special to The Globe and Mail
Published March 1, 2016

UNTTLD's Simon Bélanger and José Manuel St-Jacques have been flouting gender lines for years, so it comes as no surprise that they propose putting Grégoire– Trudeau in pants. "Sophie can stand alone," says the Montreal-based duo. Nominated for The Swarovski Award for Emerging Talent, Fashion, and recent winners of the Mercedes-Benz Start– Up competition at Toronto Fashion Week, Bélanger and St-Jacques hope other prominent Canadians will follow Grégoire-Trudeau's patriotic example. "There is so much diversity in Canada's fashion landscape, there is no reason to wear anything else but Canadian fashion," say the pair. "We need more people like Sophie to promote our identity."

Nova Scotia-born, Toronto-based Matthew Gallagher felt inspired by Grégoire-Trudeau's position on the world stage. "She is in a powerful place, and I wanted the design to reflect the elegance, stoicism and refinement that role requires," he says. A contender for the Swarovski Award for Emerging Talent, Fashion, Gallagher drafted a gown that's "modern yet traditional, which reflects the impact the Trudeaus are having on Canadians at the moment – moving forward without forgetting the past." Gallagher's vision is meant to sparkle, literally and figuratively. "It is difficult as Canadians to be taken seriously in the fashion industry as a whole, and Sophie has a chance to change that by creating a wardrobe of beautiful clothing that will compel people to take notice of our talent," he says.

"Sophie is the most visible woman in Canada, and a great role model for the future of Canadian fashion," says Toronto-born Tanya Taylor. As a CAFA International Canadian Designer of the Year Award nominee, 2014 CFDA/Vogue Fashion Fund finalist and recent recipient of the prestigious 2015 Woolmark Prize, the New York–based designer is quite the ambassador for Canadian fashion in her own right. "We have so much talent that the world needs to be aware of," she says. "Showcasing Canadian design on such a scale definitely makes an important difference for the visibility of designers." Taylor sketched Grégoire– Trudeau's look with a flowing fit and brightly coloured floral print in mind. "My design was inspired to evoke a magical sensibility for a sophisticated woman who is optimistic and feminine. I love the idea of flowers elegantly twisting with the movement of pleated silk."

With his daring sensibility and studied approach, budding talent Hamish Thwaites just might follow in the footsteps of his current boss, Erdem Moralioglu. As an intern for the London-based Canadian – who has dressed the likes of Kate Middleton and countless A-listers – Thwaites understands the importance of a strong sartorial narrative. For Grégoire-Trudeau's look, the CAFA Fashion Design Student Award nominee tells the story of an unexpected muse. "I love the thought of suffragettes in their studios, working with their hands to construct a political statement," he says. "I find myself imagining them rallying in the streets with heraldic-like flags, defying patriarchy with chaos." His creation is at once audacious and avant-garde, designed to capture a sense of individuality and strength. "Sophie is someone who many women identify with and respect," says Thwaites, adding that her support "is so important to the survival and growth of our industry."

Tapping the runway's recent fascination with upholstery fabrics, Womenswear Designer of the Year nominee Kimberley Newport-Mimran conceived a strap-less ball gown made from brocade floral jacquard. "I used it in a more couture style that could stand the test of time," says Pink Tartan's president and design director. "This look would complement Sophie's flawless natural skin tone," she adds, picturing Grégoire-Trudeau with loosely waved hair and barely there makeup. As a final touch, Newport– Mimran would ground the look with a futuristic, curved-heel pink pump from Dior's Spring 2013 collection.

Sophie Grégoire-Trudeau isn't the only Canadian political player navigating their new status as a style icon. Prime Minister Justin Trudeau is no slouch when it comes to fashion, and the state dinner will be an opportunity for him to dazzle in something more formal. Montrealbased label Samuelsohn, founded in 1923, offers sumptuous velvet dinner jackets along with traditional black tuxes. Its made-to-measure service ensures Trudeau would be dressed to impress – in made-in-Canada style. To retain his cool factor, an exaggerated peaked lapel on a double-breasted tux would suggest a flair for the debonair without scaring away more conservative tablemates. Of course, this style would require a bow tie. If black proved too basic, a dandy Liberty floral option by Toronto-based Pomp & Ceremony would be the ideal complement and channel a touch of his father's rebellious attitude. 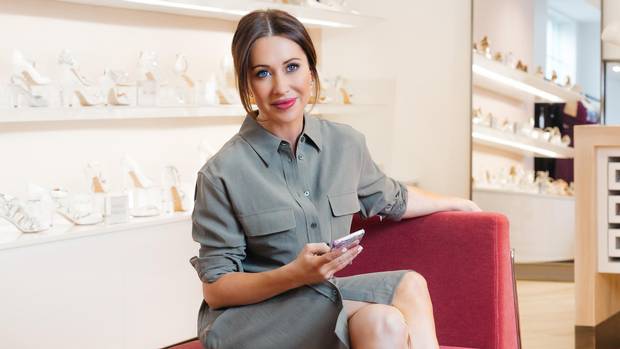