It's no surprise that the recent lineup of collections in London drew heavily on floral themes. Flowers, after all, are not only the surest sign of spring, but also a stand-in for female sexuality.

If Robert Herrick's "Gather ye rosebuds while ye may" takes on a certain resonance in the realm of fashion trends, however, London's designers pushed back with collections that attested to a more directional approach.

Christopher Kane demonstrated, yet again, that he can merge the academic and the aesthetic into something exceptional.

Moving on from last season's MRI scans of the human brain, he turned to the anatomy of a flower for spring.

The collection began with what he described as metallic "sterilized" petals in cutouts on suits and streamlined daywear, then progressed to blooms accompanied by descriptive labelling and arrow patterns formed into organza. With Pink Floyd's Another Brick in the Wall providing musical context, Kane seemed to be rewriting the book on what pretty looks like circa 2014: power sweatshirts with below-the-knee skirts, deceivingly complex shift dresses and a judicious amount of sheerness and bare skin.

The mint-ice-cream shade favoured by Kane reappeared in Christopher Bailey's collection for Burberry Prorsum, where the flower message was more subdued.

Underneath, pastel blouses and skirts in lace from Nottingham revealed a sexy side. Rose petals rained down as the models took a final turn on the runway.

At Mulberry, a silvery floral silk jacquard and an oversized 1960s-style petal print in silk twill represented the brand's mix of rambunctiousness and reserve as expressed by Emma Hill. For her swan-song collection with the brand, the creative director sent out breezy, retail-friendly pants and skirts paired with summer-weight leather pieces and flattering capped-sleeved jackets.

Small, white hydrangea branches placed atop the seating cards greeted guests to the Erdem show, but the floral enthusiast actually shifted away from the multicoloured digitized blooms of previous seasons and focused on a strict black and white scheme. Flowers appeared nonetheless – as dimensional bits on sweatshirts and in intricate lace patterns – but the overall mood was more melancholic. A prep-school motif composed of white collars and crests made with couture-level detailing suggested a new and surprising direction for the designer.

"In leaving out lots of things, I discovered a lot of other things," the designer said backstage after the show, describing how a starting point of Etonian uniforms gave way to rugby shirts in duchess silk.

This season also marked a graduation of sorts for several designers.

Jonathan Saunders, whose florals played out as colour-drenched poppies on sheer blouses and satin T-shirts, gave his collection a level of enviable coolness that young women will approximate whether or not they can afford his clothes.

"Mary's work is couture-level now," said Toronto client Suzanne Rogers, who has attended the London shows for the past few seasons. Indeed, the designer worked with the French embroidery house Maison Lesage for the finale's rococo dresses in saturated colours.

Edward Meadham and Benjamin Kirchhoff indulged in on a somewhat macabre riff on the girls of nursery rhymes that, on a deeper level, conveyed their impressive obsession with period references and sumptuous, customized textiles.

Simone Rocha composed a subversive portrait where proper dresses featured dropped, rebellious ruffles and pockets of exposed skin. Variations on her nylon knee-highs rimmed in pearls – a tribute to the Irish Sea – will be everywhere come April.

Canadian Thomas Tait, meanwhile, transitioned from a sleek, sporty perspective to calmer, softer, voluminous looks. Nylon overlays in muted tones over silk stretch organza and striped, silkscreened leather confirm that he is no minimalist, even if he shies away from ornamentation.

"I've been shouting for a few years with my collections and so I just wanted to pop the balloon and do something a bit quieter," he said after the show.

Tait was a welcome outlier and his designs may prove longer lasting than the kinetic florals from Paul Smith and the duo behind Peter Pilotto. The latter overlaid orchid-patterned lace atop sculpted dresses, all in a hot palette that nodded to artist Ken Price. The former punctuated his suiting with giant digitized daffodils.

To say Tom Ford dipped his toe into excess would be the understatement of the season: Evening looks were so covered in mirrored pieces that the walls appeared to come alive with reflected squiggles. And latticed lace dresses paired with thigh-highs made his caramel leather suits look comparatively reserved.

As outrageous as it was, though, it all steered clear of louche.

To generate buzz in New York, the runway may no longer be enough
September 21, 2013 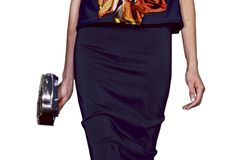 Made-in-England : How Mulberry has kept its English roots
August 10, 2013 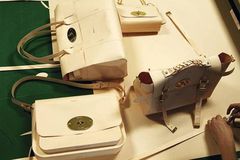 What do you think of paisley for blouses or skirts?
September 21, 2013 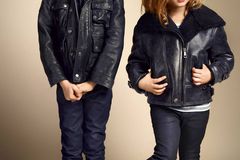