Inside a nondescript building in Montreal's hip Mile End neighbourhood, a 30-year-old fashion powerhouse hums along. M0851, which specializes in the production and sale of full-grain leather bags, accessories and outerwear, has quietly outpaced many of its counterparts to become one of Canada's fastest-growing fashion companies. In 2016 alone, in-store sales have risen 53 per cent, and e-commerce is up 120 per cent over last year. From its head office, where more than 90 per cent of its products are made, M0851 manages a retail presence close to home, with stores in Toronto, Vancouver and New York, and abroad, including Madrid, Hong Kong and Tokyo, as well as exporting to over 30 countries. The roaring global success and recent growth acceleration of the otherwise discreet brand is even more remarkable considering its founder, Frédéric Mamarbachi, never intended to capture much of a stake in the international leather goods industry, worth over $62-billion.

While the company has grown steadily for three decades, Mamarbachi maintains his only objective has always been to simply make a product that ages well and becomes more charming over time. "I don't consider myself a stylist, mainly because it doesn't start with styling," he says. "It starts with an idea – how can we take two pieces of leather and make a product no one can resist?" And though his design sensibility may be discreet, his ambitions for the future of his company are bold, including expanding into furniture making, opening doors in a greater number of countries and moving into shopping malls.

Mamarbachi started out as a wholesaler in the early 1970s, producing bags, belts and other small leather goods for retailers across Canada and the U.S. Seeking creative freedom, he relaunched in 1987 under the label Rugby North America. Within a year, he opened a flagship store on Montreal's Saint Laurent Boulevard (where it operates today as M0851) and began selling his line south the border at upscale department stores such as Barneys New York and Saks Fifth Avenue.

"We had many good years back then without the intention of really growing," Mamarbachi says from his office at M0851's bustling headquarters, seated at the head of a massive wooden table he designed himself.

As the company expanded further during the 1990s, he found it increasingly difficult to register the Rugby North America name in a number of countries. In 2003, he rebranded the line once more to become M0851. (The "M" stands for Mamarbachi, while 08 and 51 represent the month and the year he was born.) "We went against the advice of every marketing specialist," he says. "They warned us that the name was too easily forgotten. It's true, but I also know that the year we changed the name, our business grew by 30 per cent."

Chantal Durivage, secretary for the board of directors of Group Sensasation Mode, an organization that mobilizes Quebecois design talent and executes fashion events, has watched as M0851 has grown with great success. "They've been true to their brand since the beginning," she says. "When they first opened their store on Saint Laurent, they were already clear about their positioning and the quality that they wanted to put into their products."

While brands such as Roots offer international consumers a slice of Canadiana with leather jackets boasting maple leaf motifs, M0851 is known for "great basics – there's a sense of quality that's almost luxury, but it's affordable," Durivage says. The company's sleek unbranded pieces transcend regional preferences, trends and the kitsch factor, speaking to the contemporary tastes of cities such as Beijing, Osaka and Santa Monica, where M0851 has brick–and–mortar outposts.

Quality materials are paramount to creating a product that stands the test of time and appeals to markets around the world, insists Mamarbachi, who has been sourcing full-grain, vegetable-tanned calf leather from the same family-owned Italian company since he launched his brand. "If you want your product to last 30 years and still look good, you can't cheat," he says. Presently, M0851's products range from $20 for a key ring to $1,975 for a men's leather parka with fur trim.

The company doesn't skimp on manufacturing, either. It currently employs 50 full-time artisans to assemble bags and small leather goods in-house, along with 30 exclusive contractors crafting apparel and other products remotely in Montreal. To source the cashmere scarves and other knitted accessories it lacks the capacity to produce, M0851 has developed long-standing partnerships with co-ops in countries such as Nepal and Peru.

As Mamarbachi prepares to mark 30 years in business at his Saint Laurent Boulevard store in 2017, he is embracing grander ambitions. According to his daughter, Faye, who oversees the company's sales and marketing, M0851 has a goal of doubling its sales by 2020. To reach that target, it has implemented a "lean manufacturing plan," she says, that includes automating select processes, such as leather cutting, and hiring engineers to consult on efficiency and master craftspeople to cross-train personnel in all areas of assembly.

Mamarbachi admits he is keen to grow only insofar as it allows him to continue operating independently.

"I never design anything for anybody, ever," he says.

"I would probably make a mistake trying to guess what other people want. I have to do it for me, and if others like it, that's great."

Furniture making, a long-time hobby for Mamarbachi, is another possible avenue for development. By 2018, the company plans to convert the ground floor of its head office into a storefront that, along with its leather goods, sells wooden tables and fabric-covered club chairs similar to the ones that furnish the brand's headquarters and retail stores.

Interior design is a natural offshoot for what Marabachi describes as a lifestyle brand. In the early aughts, M0851 opened a boutique hotel above its Antwerp store, complete with sleek decor and a curated selection of books and DVDs. It no longer owns those accommodations, but the company has plans to create additional living spaces in the next couple of years, starting with the apartments atop its recently opened Westmount store in Montreal. "It's for the pleasure of designing more than the business side," Mamarbachi says of the initiative.

At the same time, M0851 continues to work with franchise owners to expand its store presence both at home and abroad, with additional locations planned for Montreal, Boston and New York and Toronto's Eaton Centre, which as Retailinsider.com reports, signals a transition from street-front stores to shopping centres. Simultaneously, the brand has ambitions to set up shop in new territories. "I'd love to be in Australia," Faye says. "In terms of values and approach, it's an untapped market."

But for all Mamarbachi's success, it's the company's values that make him most proud. "In a field that is very egotistic, there are no egos here," he says. "No one has ever shouted at anybody in this place, which, to me, is my biggest accomplishment." The convivial atmosphere is no accident. "We work in a serious manner, but we don't take ourselves too seriously," Faye says.

The company's cheerful attitude is as anomalous in today's skeptical retail landscape as its commitment to subtlety. "Most companies are competing with each other nowadays by designing complicated things," says Mamarbachi. "It's a very difficult task to design simple things. I believe that there's not much in that market, but that is where we will always be."

Supermarkets: 5 must-shop indie craft shows across Canada
December 9, 2016
Why borrowing is the new black
December 5, 2016
Money talks: How the low loonie is being fashioned into a boon for designers
June 30, 2016 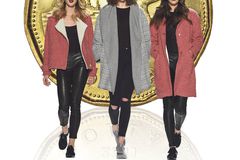