Once a bastion of endless parking lots, fast-food courts and loitering teens, the shopping centre is being reinvented as a more urban, epicurean and grown-up place. Janna Zittrer charts an extreme (and upmarket) makeover 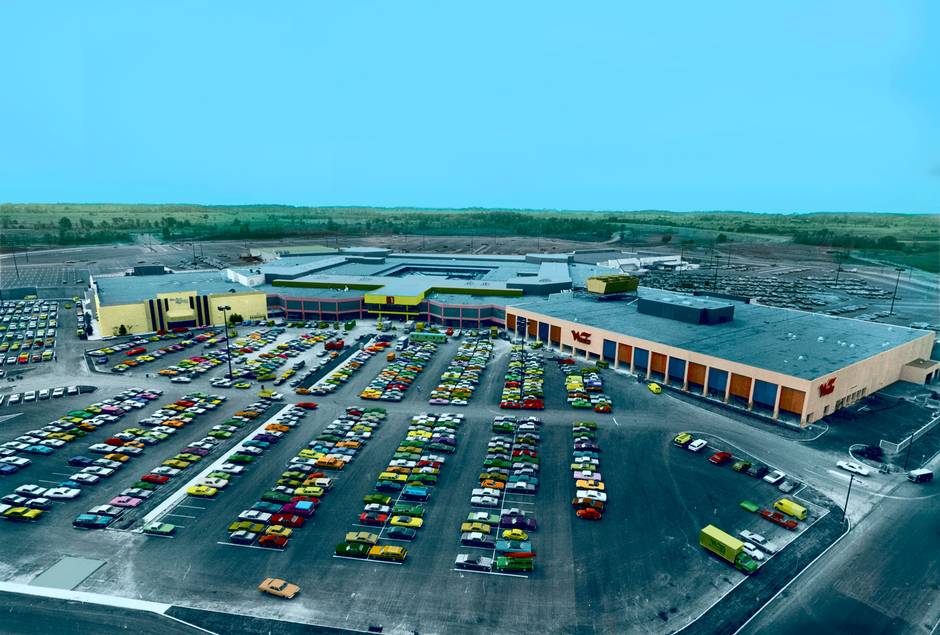 Square One Shopping Centre in Mississauga in 1973. (Dennis Robinson/The Globe and Mail)

It’s Tuesday in the middle of the afternoon, but I’ve lost count of the number of people toting giant shopping bags from Louis Vuitton and Jimmy Choo around Yorkdale. When it was founded 51 years ago, the shopping centre sat surrounded by farmland at the edge of urban Toronto. Today, the mall is one of many in Canada undergoing multi-million dollar renovations in an effort to attract more upscale stores and, with them, a more affluent clientele. In the wing adjacent to Holt Renfrew, Yorkdale boasts the highest concentration of luxury labels in the country and is on track to become North America’s top-selling mall by 2018.

“Luxury brands hold cachet like never before,” says general manager Claire Santamaria. “When I was a kid, we angled for Benetton rugby shirts and Roots purses. Today’s youth might still appreciate those things, but they also want the Coach purse they’ve seen celebrities carrying.” As such, Yorkdale has been calculating in its courting of high-end retailers in recent years, and it’s not the only mall in the country banking on big-ticket items.

To keep pace with the demand for coveted brands, Yorkdale will open a new 300,000-square-foot wing in August 2016. (To compare, the luxury wing Yorkdale unveiled in 2012 spans 145,000 square feet.) Nordstrom will occupy more than half of the expanded space, in addition to Canada’s first Uniqlo outpost and nearly 30 other new stores.

Yorkdale’s elevated offerings embody a larger trend among Canada’s malls: Shedding the tired decor and sameold stores of decades past, shopping centres from coast to coast are shirking their suburban-time-waster status to become desirable destinations for the moneyed set.

The chic-ification of shopping malls has, in fact, been underway for years. Carrefour Laval in Quebec unveiled a $54-million overhaul in 2009 and, within a few years, picked up such first-to-province stores as Crate and Barrel and Zara Home. Come October, the Cadillac Fairview property will house Canada’s first branded Mackage boutique. “Carrefour Laval is considered one of the best shopping destinations in Montreal,” says Mackage co-founder Eran Elfassy. “We are confident that it will be an excellent retail location for [the brand].”

Timeline: Canada's malls through the decades

A lack of quality street-front space in Canada explains in large part why so many retailers are setting up shop in malls. “High-end malls like Yorkdale and Pacific Centre in Vancouver also tend to be tourist draws, which allows brands to not only capitalize on domestic market sales, but also receive a steady stream of customers from outside the local market,” says retail analyst Doug Stevens.

“The weather in Canada might also help drive retailers to malls,” points out Ron Wratschko, executive vice-president of operations at Cadillac Fairview. So does joining an established destination with proven traffic and sales. “In a very challenging retail market where e-commerce is taking more and more space, retailers obviously want to invest where the shoppers are going to spend the most money,” says Julia Cyboran, editor-in-chief of Montreal-based shopping magazine Loulou.

Sherway Gardens, another Cadillac Fairview property, is in the midst of its own multi-phased $550-million makeover. The West Toronto mall is adding 210,000 square feet ahead of the respective arrivals of Saks and Nordstrom in 2016 and 2017. The 44-year-old mall also received a much-needed facelift in the form of interior improvements like higher ceilings and a lighter colour scheme. The fresh look is already paying off, with such luxury brands as Tory Burch and Thomas Sabo joining Sherway’s roster this past spring. And this September, the mall revealed its latest expansion, featuring a new Harry Rosen flagship, relocated Sporting Life and more upscale food court.

Cloverdale Mall in Etobicoke is seen here in this 1963 file photo. (Harry McLorinan/The Globe and Mail)

Not to be outdone, North America’s largest shopping centre, West Edmonton Mall, is sprucing up all 5.3-million square feet with a modern look by award-winning Canadian firm GHA Design Studios. (The company is also behind the redesigns of Yorkdale, Carrefour Laval and Calgary’s Core.) The centre’s brighter and sleeker decor sets a stylish backdrop for upmarket Edmonton exclusives like Stuart Weitzman and Tiffany & Co. Meanwhile, in nearby North Edmonton, Londonderry Mall has allotted $130-million in anticipation of Simons’ 88,000-square-foot anchor store opening in fall 2017.

Upon completion of its $430-million southern development in spring 2016, Mississauga’s Square One Shopping Centre will cover 2.2 million square feet and feature Ontario’s first Simons store, along with an all-new Holt Renfrew.

Acquiring premium retailers allows Square One to target what it calls the “true luxe” shopper: “One who has the financial means to purchase high-end items and purchases luxury brands frequently throughout the year,” explains Square One marketing director Toni Holley. “It’s important that we create experiences that are meaningful to people who are truly passionate about fashion, style and luxury brands,” she says. “We want Square One to be top of mind for the luxury or aspirational shopper.”

To further court fashion lovers, Square One has tapped style influencers including blogger Hanneli Mustaparta and designer Erin Kleinberg to take over its social media accounts, and chose Julia Restoin-Roitfeld (creative director, model and daughter of French fashion editor Carine Roitfeld) as their fall/winter campaign star. It also partnered with the Toronto International Film Festival to provide a sneak peek at the high-end brands landing at Square One in early 2016. “Our ultimate goal is to give our shoppers moments they wouldn’t normally have access to, including designer previews, trunk shows and personal shopping,” says Holley.

According to retail analyst Stevens, it’s this experiential differentiation that will come to define our malls. “The truth is that until very recently, most mall experiences were mediocre,” he says. “The shopping mall experience as we’ve known it for the past 50 years is defunct, and will be steadily replaced by entertainment and hospitality centres that also happen to offer great shopping.” Cyboran agrees: “Shoppers are heading to malls as destinations where every desire can be satisfied, from clothing to food to manicures to goodies for the kids.”

Mall performance is most commonly measured by sales per square foot, says Stevens. “On this basis, you’ll find the best-performing malls in the country also tend to be the most upscale.” In that sense, surrounding shoppers with desirable brands and maximizing their dwell time sounds like a formula for success. And as long as the new breed of mall rat is living it up rather than loitering, this retail renaissance just might last.