Back in the '80s and early '90s, when the fashion world was in its hedonistic heyday, a Sicilian-born photographer named Marco Glaviano brought sizzle to the scene. Glaviano, who operated photo studios on both sides of the Atlantic, made his mark working with fashion's best models and helped some, like Stephanie Seymour and Cindy Crawford, attain superstar status.

Glaviano is also known for his portraiture of jazz greats, and is still passionate about shooting and exhibiting both his past and current photography in galleries the world over. I spoke to Glaviano about fashion's new commerciality, the lost era of the supermodel and aging beauty while he was in Toronto to open his most recent exhibition at the Izzy Gallery.

It's great to see you still loving what you do, but the business has changed in so many ways. Does that bother you? Has it changed your approach to what you do?

No, it doesn't bother me. You have to do different things. My approach now is to concentrate on my artwork and not go to the commercial side, because the commercial side is not as good as it used to be. There was some value in the magazines and the work that we did – there was attention to detail and to beauty, which is lost. I see photographers working in the studios that I own in New York and Milan, and they say, "Oh, we'll shoot it and we'll fix it later. " Which is so wrong. It's becoming all about post-production and very little photography. And it's not good.

It's almost like a fast-food thing. They just want to churn it out.

It's becoming McDonald's instead of Cipriani! It's sad but it doesn't affect me very much because I just continue doing my work. If you look at my pictures from 1970 to three months ago, there is not much difference.

You were one of the first to really celebrate women like Cindy Crawford. You helped popularize their images through the calendars that you did.

Actually, there were three of us. The late John Casablancas, me and Patrick Demarchelier. We did that sort of deliberately. We sat together one day and said, "Now it's time to do something for the models." It was not an accident. We just started working with these girls. But then we were sorry because all of a sudden they were on top!

They got too powerful. And that posed a problem for the designers too, because the models became more famous than the designers.

People like Armani, who's a genius and I admire him, didn't want top models. He said, "My clothes are more important and if these girls show up, people will look at them. They won't look at the clothes!"

You've always maintained a special connection with those iconic old models. Do you still shoot any of them?

Once in a while. I just did a really beautiful picture of Estelle Lefebure… – she used to be Hallyday – who just turned 49 and she was amazing.

Women do get better with age.

I think everybody gets better with age, at least inside. Unless you're a bad person. Then you get worse. I keep citing one of my favourite quotes from Jean Cocteau. He said that by 40, people have the face they deserve. It's true. You see bad people at 40 and you can see the meanness coming through. And with nice people, the niceness shines though.

What is it about a girl that really inspires you the most, beyond the mere physical beauty?

The character. Without personality, physical beauty doesn't mean anything. Absolutely nothing. I could give you some examples, but I'm not going to do it, of girls that are really beautiful but have nothing inside. It's not attractive. Also the camera is sort of merciless. It shows you.

You can't lie to the lens.

If you take a picture of somebody with nothing inside, it shows. I don't know how, I don't know why. It shouldn't, but it does. The physical side is important, but it's a little bit second to the personality. A friend of mine just turned 84, and I took a picture of her on her birthday. She looks like a little girl… a dress, a smile, amazing! It was beautiful. So it's not age. Beauty exists in many different ways and it's not necessarily being 18 years old and having a perfect body.

Fashion photographer Victor Demarchelier explains how he followed in his father’s footsteps
June 4, 2015 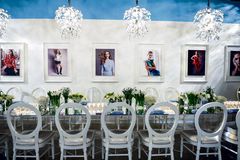 Stylist Leslie Fremar: ‘It’s about making the woman feel as beautiful as she can’
June 11, 2015 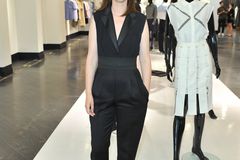 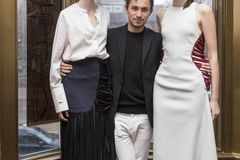