For someone who was recently awarded the inaugural LVMH Young Designer Prize, which comes with €300,000 and a year-long mentorship with the French conglomerate's executives, Canadian-born Thomas Tait seems conspicuously relaxed, less over the moon about the win than quietly appreciative. "There isn't one project I'm going to be doing or spending most of this money on," he says during a chat on a crisp London evening at the Ace Hotel in Shoreditch. "It's the kind of working capital a business my size needs just to function."

Of course, the soft-spoken 26-year-old, who was raised in Montreal and is now based in Britain, is no doubt chuffed by the honour, which he received last month in Paris after beating out 11 other finalists from around the world. But while his distinctive vision, modern attitude toward tailoring and provocative silhouettes have earned him much praise during London Fashion Weeks, his business is still a tight operation with only one full-time employee.

"The number-one focus is that production receives the staffing and the finance it deserves and needs in order to get the goods into the stores early, increase the sell through and then keep the orders increasing with time," he says in relation to his four-year-old label, which he launched not long after he graduated from London's Central Saint Martins, where he was under the tutelage of the late Louise Wilson. "Being able to buy proper equipment for the studio is going to be great, and maybe having a couple of people employed on a part-time basis."

Although Tait's collections have been applauded for their intelligence and craftsmanship, the label is currently only stocked at a handful of independent retailers worldwide, including 10 Corso Como in Milan and Seoul and Jeffrey in New York City. In Canada, The Room at Hudson's Bay has supported the brand since its first season.

Retailers "have to be very cautious with what young designers they take on because young brands can have a certain amount of shortcomings," Tait explains. "They don't necessarily have that much working capital and deliveries might not always be great. It's a struggle for brands to deliver on time because, essentially, you're trying to produce and deliver goods at the same time as brands that have a huge operational system behind them."

Since his anointment by LVMH, there has been, not surprisingly, an increased focus on Tait and a surge of interest in the label. Retailers who were once hesitant to take on the brand are now looking at it with new assurance. "I think (winning) is a nice vote of confidence among retailers because they know I'm going to have the capital to produce their orders and to get it out to them on time," he says.

For all his apparent practicality, Tait also happens to be one of fashion's biggest innovators. His experimentation with new, sensual forms has been widely acclaimed, and he's earning a reputation for his dedication to craft.

"Thomas has this great ability to cut clothing with a strong shape and a confident silhouette," fashion historian and fellow Canadian Bronwyn Cosgrave says. "He's so gifted when it comes to pattern cutting, and he's always meticulous about fabric and how he drapes. It just has a really masterly touch."

Prior to studying in London, Tait completed a threeyear fashion-design course at Collège LaSalle in Montreal, where he honed his technical skills.

"You dived into sewing, pattern cutting and fibre and fabric development really quickly and it's a huge undertaking when you're really young and naive and you have this fantasy of working in fashion and then suddenly someone sits you down at a sewing machine," the designer says. "But having gone through it, I realize that I use what I learned at LaSalle every day. When I'm in the studio, there isn't a day that goes by that I don't draw on what I learned there."

Tait's grounding at LaSalle has given him the skills to be able to execute his ideas from the initial illustrations to the finished product, which he says is becoming exceedingly rare. "When you're recruiting interns, you start to understand what they're learning at fashion school in other areas of the world," Tait says. "It's amazing how few of them are actually being taught how to make their ideas."

He adds: "The reality is, if you're starting your label, you can't afford to hire a huge team of people to make stuff for you. And if you're aiming to be stocked in the stores that stock Dior or Rick Owens, you have to be making clothes at that level, by default."

Tait's exceptional technique is evident in his beautifully constructed garments. For autumn/ winter 2014, he redefined notions of traditional tailoring with a clever play on proportions, from curvaceous outerwear with nipped waists and contoured shoulders to delicate streamlined dresses.

He also revisited the idea of leather pleating, which was first seen in his autumn/winter 2012 collection, but reinterpreted in a new context for 2014.

This unorthodox and cerebral way of looking at established norms is one of the qualities that likely won over the LVMH prize jury, which included such industry luminaries as Raf Simons, Karl Lagerfeld and Phoebe Philo. Could this first step into the LVMH family lead to something more permanent for Tait? The fashion world will no doubt be keen to find out.

Canadian designers Rad Hourani and Steven Tai short-listed for one of fashion’s top prizes
May 12, 2018 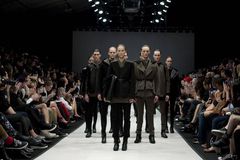 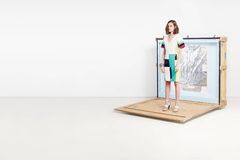 What gives Gucci goods their unique value
May 12, 2018 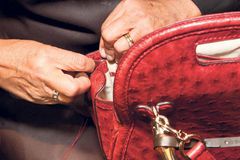