It’s no wonder that Toronto’s Jaleh Farhadpour has a lifelong fascination with precious gems: Back in the 18th century, her Persian family owned two of the largest diamonds on Earth. Team that with her architectural-design background and love of fashion and you have the makings of a style-savvy entrepreneur who feels the Canadian market hasn’t kept up with the yen for fine jewellery that’s both artful and arresting. This week, Farhadpour aims to remedy that by opening a swank new emporium, dubbed Archives, on Bay Street adjacent to the Four Seasons Hotel; a boutique-cum-gallery filled with eye-popping international creations unavailable in Canada until now, it promises to showcase some of the most glamorous accessories in the world. There are already plans, Farhadpour says, to open a second store in Vancouver next year.

For the Toronto store, Farhadpour has assembled an impressively diverse collection from legendary brands like Germany’s Meissen (which now produces a line of porcelain couture jewellery) to designers such as Italy’s Delfina Delettrez (a fourth-generation Fendi whose pieces scream opulent modernity) and Spain’s Cristina Ortiz (famous for her striking ear cuffs and articulated rings). There will also be a handful of vintage pieces by celebrated artists including Paris-based JAR (Joel Arthur Rosenthal, described as the “Fabergé of our time” by Diane von Furstenberg) and American deco-jewellery designer Miriam Haskell (who famously collaborated with Coco Chanel).

Farhadpour, whose father was an adviser to the last shah of Iran and whose mother was a prominent feminist, fled her home country after her she obtained an architecture degree. She lived in Dubai, France, England and the United States before moving to Toronto in 1988. Although her family’s fortune was confiscated during the Iranian revolution, her childhood memories of playing with her grandmother’s vast jewellery collection fuelled her passion for precious gems. Now a designer in her own right, Farhadpour recently welcomed me to her Forest Hill home, where she showed me a dazzling array of her own pieces and talked about her belief that, as designer Ortiz once said, jewellery isn’t merely an accessory, but an extension of one’s essence.

When did jewellery take on a powerful meaning for you?

Well, I have always designed pieces for myself, but, in 2005, went to Sri Lanka after the tsunami to volunteer and there were lots of gem-cutting factories and gem dealers there. I bought an enormous amount of coloured gems and started learning about their healing powers because I was staying in an ashram. I started to understand why my personality or, perhaps, my weaknesses attracted me to certain gemstones and not others. And I realized why my family had collected so many rubies and diamonds!

Every different gem has an energy that reinforces that type of energy in your inner being. For example, diamonds give you power. And rubies give you courage. So because my family were fighters from a harsh part of Iran – one that was a very difficult area to rule and they were rulers for centuries – they always collected diamonds. They had many gems but they loved their diamonds and they also had the largest collection of rubies [in Persia]. I believe in the power of gems. They really work for me. I believe that Mother Earth gives different colours, hues and clarity to different stones and that’s why we are all attracted to certain ones and not to others. So after this new fascination [developed] in Sri Lanka, I came back and I wanted to do charitable fundraising. I was brainstorming ideas with my best friend and she asked me where I got my ring. “Can you make one for me?” she asked. I said, “Of course!” And then she said, “Why are we brainstorming? Just make 10 of these and we’ll sell them!” It [the ring] was so crazy, with a big piece of turquoise and little gemstones dangling around it, but I made a few pieces of jewellery and I had the first fundraising event at my home. Sandra Ainsley then asked if I would exhibit my collection at her gallery [in Toronto], which I did. And then Holt Renfrew discovered me. Then I started to study gemology and had this passion for sharing my knowledge. It’s such a beautiful thing for me. By combining different colours of gems, you can actually create a different type of energy.

Your work is interesting because there are stories behind it. It becomes more than just flashing some expensive piece of jewellery around. There’s actually some energy to it, literal or not.

Exactly. But beyond energy, it’s always about an aesthetic and a composition. I also paint, sculpt and do ceramics. I love to create and I like to experiment with different media in my art. Nietzsche once said: “Without music, life would be a mistake.” I’d like to add to that a bit and say that, without art, life would be a mistake. I think art and creativity bring real meaning to life and connect us with what it truly is.

When it comes to fashion, there’s so much of the same happening out there, so many people just rehashing old ideas. But your designs and the designers you’re representing have a very bold and original aesthetic, almost a new take on jewellery art. Is this an idea whose time has come?

For sure. You go online and look at the pieces being made and they’re dull. They all look alike. For me, jewellery is art. The designers that I’m bringing to Toronto aren’t creating work for the masses. They’re about art and luxury – true exclusivity. And those are the pieces that are really lasting. For example, you buy a piece of JAR today and you’re guaranteed that you can sell it at auction for five times more two years later.

But aren’t you taking a chance by introducing a whole group of designers who aren’t really known here in Canada? Are you aiming for international customers who already know what they’re looking for?

I think lots of Canadians are in-the-know and look for these kinds of things. I know many people [from here]who go to Paris and London to buy these pieces. I used to! But now we’re going to have some of that artistry here. I think Canada is ready.

Why are so many women becoming so keen on expressing themselves via jewellery?

I think that jewellery has always been the essence of expression for a woman, in part because of the preciousness, because of the timelessness, because you pass it to the next generation – it’s completely different from clothing. Jewellery lasts. A piece of gold will never deteriorate. It’s not like a piece of fabric. And, yes, I think that people are more sophisticated today, but the true sophisticates are looking for real art. They want something that no one else has.

It seems to me that Archives is going to be so much more than a purveyor of fine jewels. It’s going to be a place where people can just come and be inspired.

I hope so. I count on that. I hope it works as a business model. I know it will work as an art model. I want to create an amazing, interactive environment, where people’s own visions can come to life, where they can even help create new pieces out of some of the existing jewellery they might have. We can collaborate on a redesign. It’s going to be very exciting. 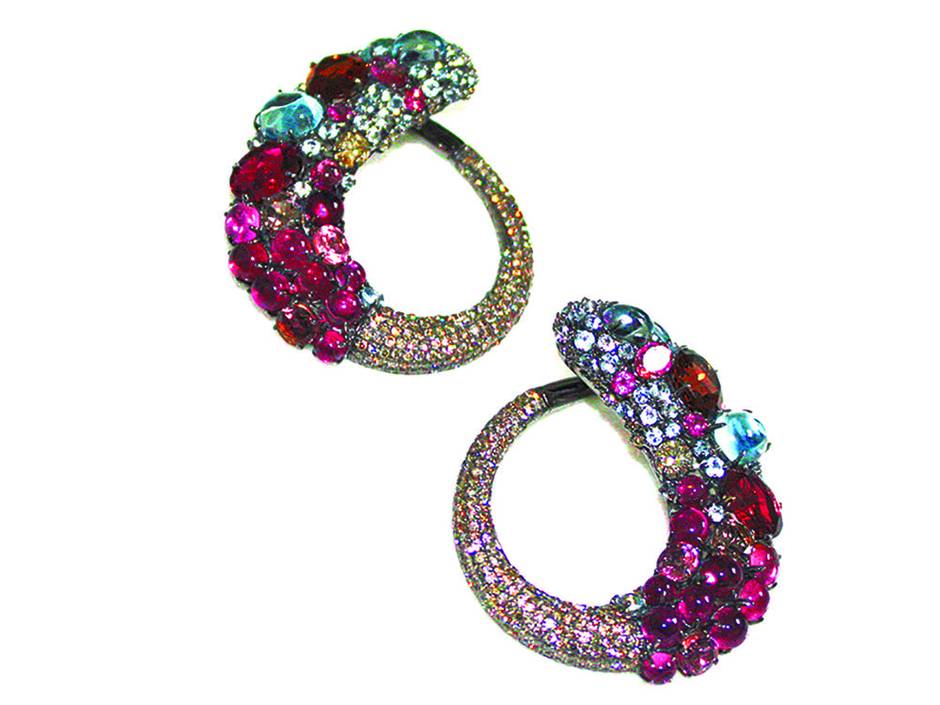 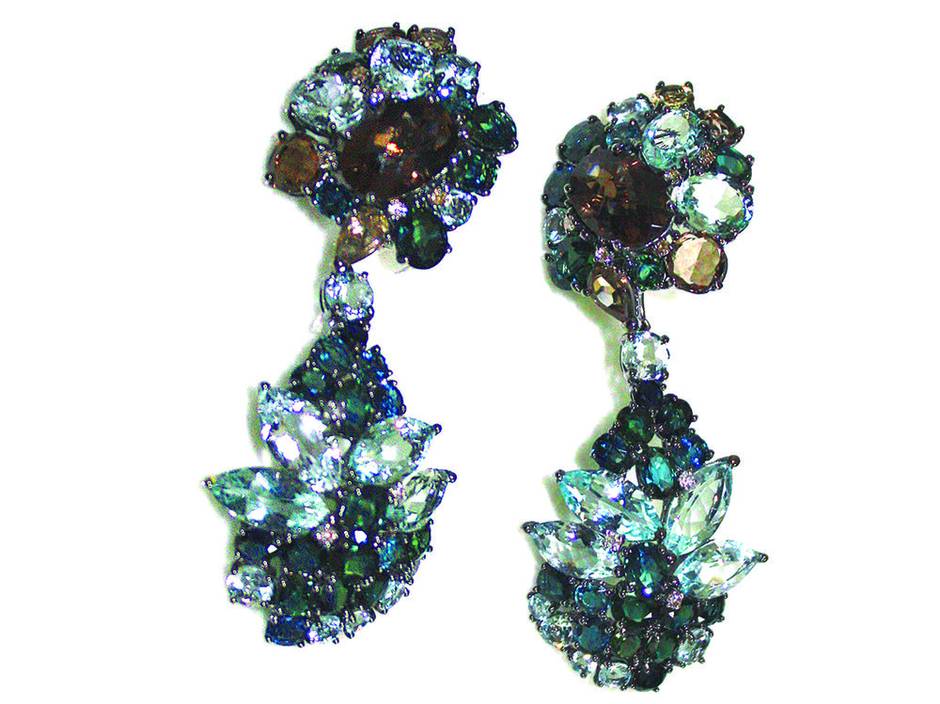 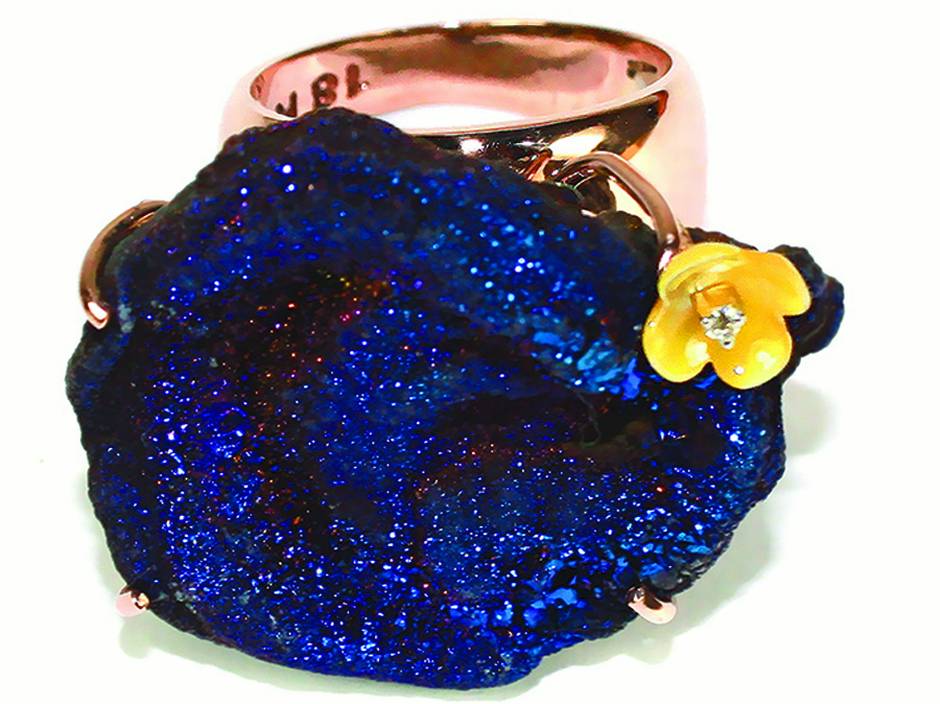 Rose-gold ring with a titanium-plated druzy agate. The diamond sits inside a mother-of-pearl flower ($3,800). 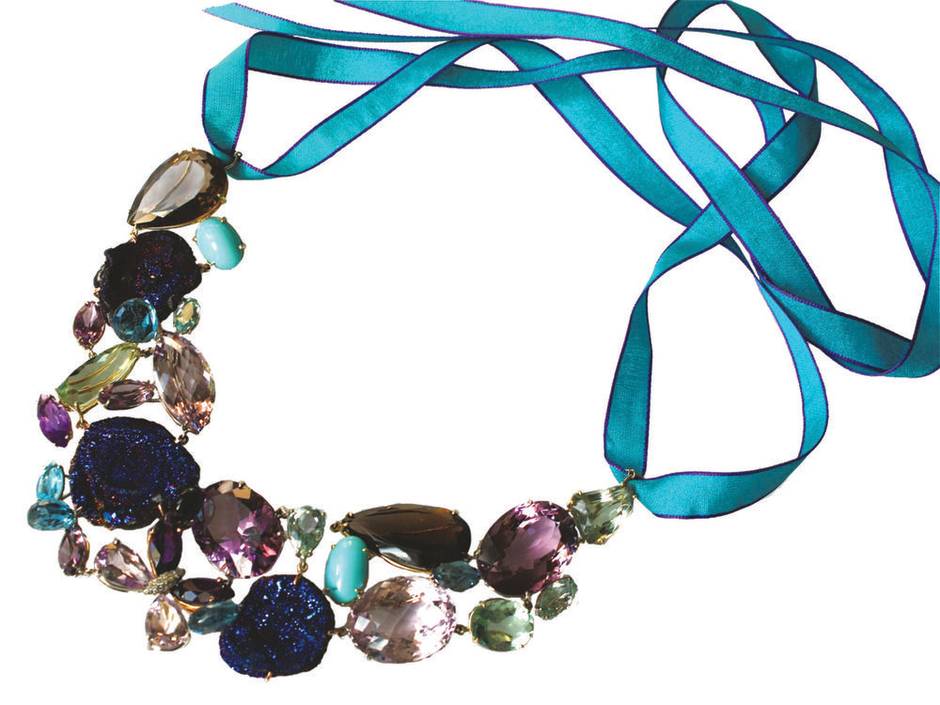