It was for years a general store to the stars, but the Kitson emporium closes its doors this weekend – one last January fire sale at a store where security guards once flanked the door so clamouring customers wouldn't exceed the fire code.

Los Angeles magazine's splashy 2005 profile of Kitson features a full-page photograph of Lindsay Lohan. She playfully poses for a mock traffic citation, a picture worth this thousand words about the Los Angeles store and a now-bygone era. One of the several times the actor famously crashed her car was after a Kitson shopping trip. In those days she and the store both gamely embraced the ensuing notoriety and an economy flourished.

Not pictured: Kitson's Scottish-born, Canadian-raised owner Fraser Ross, who studied business at York University. His empire, which grew out of a cramped Toronto emporium, at its peak expanded to 17 locations – in Malibu, Newport Beach, Santa Barbara, Portland and Las Vegas, even at the Los Angeles airport. The obituary for Ross's Kitson is also the coda for the celebrity evolution of shoppertainment, may it R.I.P.

Ross first spent a decade honing his buying and merchandising skills with Ice, the boutique he operated from 1989 to 2004 across from Toronto's Four Seasons Hotel, in the days when the Toronto International Film Festival's hub was Yorkville and visiting talent could still wander the neighbourhood relatively unmolested.

Eventually, Ross left Hollywood North for the real thing and opened the apparel and home accessory boutique Kitson (his middle name) in West Hollywood, down the street from celeb lunch hot spot The Ivy on Robertson Boulevard. Initially, the Toronto store's ongoing success powered Kitson's middling sales, but opportunity knocked in late 2002, when Academy Award-winner Halle Berry was snapped at the L.A. store carrying an "H" initial handbag she'd previously purchased there; the image was featured in the weekly tabloids. (In Canada, the byproduct was a year-long craze for Roots's lowercase initial purses.)

Few were immune to the shop's charms, which were built on the expensive Los Angeles casual style of cheerful, cheeky tissue-thin cashmere sweaters and tops. The tabloids featured Kitson's sold-out, ripped-from-the-tabloids slogan Ts that capitalized on the zeitgeist ("Everybody pretend to be normal"), most famously when, in the wake of the breakup heard around the world, Ross originated the Team Angelina and Team Jennifer T-shirts.

This was back when the most famous housewives were still the Desperate ones, and young Hollywood wielded rhinestone-studded Sidekicks. The eclectic, pop-culturedriven fad items bought by the stars were coveted by the civilians and tourists devoted to them. The conspicuous consumption fuelled the envy that in turn begat the felonious so-called Bling Ring, the group of teens who burgled the Hollywood Hills homes of starlets like Paris Hilton, Lohan and Rachel Bilson for swag. (Sofia Coppola later made a film inspired by the group's escapades.)

During the celebrity baby boom of late 2005 (Jennifer Garner, Katie Holmes, Gwyneth Paltrow), Ross gave business a bump by opening Kitson Kids across the street. It was then that who bought what became even bigger business. In 2006, Ross filed a suit against US Weekly that contended the magazine was deliberately excluding mention of Kitson from its photo pages, estimating the cost of this at $10,000 a week (had Kübler-Ross postulated the five stages of celebrity, this stage would be Entitlement). Maybe that's why, at peak exposure, Ross also invested in a new paparazzi agency called Sunset Photo & News (around the same time, the FBI investigated a possible connection to e-mail hacking of US Weekly).

On the heels of Nicole Richie, Uggs and mukluks came the E! network's 2007 premiere of a new series called Keeping Up with the Kardashians. They and the stars of MTV's hit The Hills frequented the store, and these newly famous reality stars helped the soft-gossip marketing system weather the 2008 financial downturn (it helped that with the economic meltdown came Britney Spears's own, complete with panty-free wee-hours shopping spree). Quid pro quo: When the Kardashians first seriously expanded into endorsements and retail in 2010, they held fan signing events at Kitson's original Robertson Boulevard store.

Departing CEO Christopher Lee, who joined Kitson after nearly a decade as senior vice-president of Forever 21, once called Ross "the Mozart of merchandising." It's true. Anyone who wonders how Ross stretched 15 minutes of fame out to 15 years doesn't give the retailer enough credit for his high-low kitsch meets pricey cool mix later emulated in spirit, if not in taste, by concept boutiques like Paris's Colette, which opened in 2007.

And though Fodor's travel guide once quipped, "This store has gotten more press than Paris Hilton," Kitson died from too much of a good thing – not from any return to discretion and privacy, but made senescent by the life cycle it helped create. Feckless fame whoredom has moved on to the next hot spot – social media. And the social-sharing economy doesn't need an intermediary: The stars are their own paparazzi now. 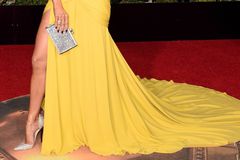 Adventures in forecasting: One thing we know for sure, fashion foresight isn’t 20/20
January 6, 2016