If there was one light-hearted riff I heard most often during otherwise heated arguments about Canadian politics during the election last month, it was not Justin Trudeau's supposedly dreamy looks but that we'd like more style from our potential leaders. It was nonpartisan: anything besides boxy suits or a timid knotted scarf – we'd settle for a teasing glimpse of patterned sock.

From one acquaintance came a plea for narrow ties, another for Italian collars, while I admitted a fondness for the many photos of Pierre Trudeau in wide-wale corduroy suits and loud, propriety-flouting patterned blazers, ties and shirts. A dash of confidence and something resembling personality. Less conservative Diefenbaker, more swaggering Jagger. Glamour, even. When I think of the fun with gifs that could have been had with P.E.T.'s impromptu hamming in those oddball outfits… The Liberal swearing-in this week won't be scrutinized with the pomp of the U.S.'s Inauguration Day, but there's a place for style in the top closet of the nation.

Trudeau père had glamour and once elected, the confidence not to jettison it (he expressed it through sartorial verve, rather than the tonsorial tastes we've been dissecting this election). It was an asset. "Nothing about the next prime minister of Canada is ordinary," Gilbert Moore wrote in Life, April 1968. "He wears what he likes, when he likes – and is apt to appear in the House of Commons wearing an ascot and sandals. He has a brown belt in judo, skin dives off Tahiti, and once slid down the banister in the House of Commons carrying an armful of important legislation."

As a tool of what political writer Virginia Postrel calls "non-verbal rhetoric," glamour elicits an emotionally resonant response – in this case, "an enjoyable pang of projection, admiration, and longing." The most striking recent example hasn't been a rock star or celebrity or fashion plate, Postrel argues in her book The Power of Glamour on the subject, but in 2008 with then-candidate Barack Obama. The iconography used in that campaign – the visual persuasion of the profile sketch posed as Hollywood icon – was classically glamorous. "Like John Kennedy in 1960, Obama combined youth, vigor, and good looks with the promise of political change," she says. According to David Heymann in his book A Woman Named Jackie, after his election to the Senate in 1952, 32-year-old Kennedy was aware of his role as party poster boy and used to send signed "glossy glamour-boy photographs" of himself to constituents. Hey, if it works.

But the thing is, a person can really take no credit for looks – they're part of a genetic lottery and, for all the hubba "or to express personal taste. They're very limited – red tie, blue tie." Hopefully, the innocuous image was merely in service of running a successful campaign and that a certain birthright Trudeau élan returns. (Mother Margaret Sinclair wore a groovy hooded and homesewn wedding dress, and father once donned ribbon corsages, a wool cloak, floppy wide-brim fedora and plaid trousers to present the Grey Cup, remember.)

In an increasingly shorthand visual culture, conformity would be a missed opportunity – especially since, in other ways, the Liberal campaign has been shrewd with the language of visual communication, from selective clothing details to props. In one family photo op the Prime Minister Designate has on a checked wool barn jacket like one his father wears in a similar snap from decades earlier. On the night of the election, notably also the same night as the latest Star Wars movie trailer debut, the Trudeau family watched results while their children played with toy light sabers in the foreground; the crossing foam swords were Liberal red and Tory blue. As a bonus, an old photo of Trudeau and his wife Sophie Grégoire on the red carpet showed some of his earlier, more freewheeling taste in clothes and seemed to re-circulate most widely among voters during the final throes of the campaign; just as the niqab issue and debate about "real Canadians" reached fever pitch, there was Trudeau smiling, reassuring, wearing a shalwar kameez with ease.

Dressing not to impress, but to express his genuine personality again, with the (yes) nice hair and the creative flair the country (from a literal lifetime of photographic evidence, for better or for worse) already knows he has, doesn't contradict seriousness of purpose. It would be an asset. More change from the previous highly controlled status quo, and the same sort of refreshing enthusiasm he has for Canada's future.

Nathalie Atkinson: How clever will your costume be this Halloween?
October 27, 2015 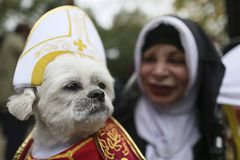 Nathalie Atkinson: Fashion collaborations are often an act of commerce, not creativity
October 20, 2015 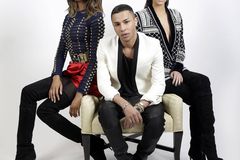 Nathalie Atkinson: Thanks to the Internet, everyone’s a fashion critic
October 14, 2015