As we leave salt-stain season behind us, it's time to polish up those wingtip brogues, oxfords and bluchers. Neglected leather gets dry and brittle, and now that we're living in times of thoughtful consumption and sustainability, a regular shine to prolong the life of footwear is no longer retro affectation, it's de rigueur. But just who are these skilled craft workers at our feet? Shiners, the documentary debut of Canadian director Stacey Tenenbaum, explores the perceptions of the service and profiles several of its long-time purveyors around the world (the international premiere is April 29 at the Hot Docs Festival in Toronto).

The typical shine stand design – putting clients on a throne and in stirrups raised above the labourer at their feet – belies the subservient way some are treated. That's why Balloo in La Paz's Plaza San Francisco prefers to be faceless: Hunched over his blue wooden polish box, he and the square's other shiners all wear caps and balaclavas in order to conceal their identity. They experience the lowly, almost criminal perception, discrimination and bullying that often comes with their work (in several cases, their own families don't even know they are shiners).

Working crouched at someone's shoes has often been mistaken for having inferior social status and value, but through client and craftsperson interviews, Tenenbaum restores the dignity of the métier. In Sarajevo, for example, second-generation shiner Ramiz proudly speaks of continuing the work his father started during the Bosnian war, when setting up his corner stand amid snipers and shelling offered the ravaged community a small semblance of normalcy.

The trade's youngest new practitioners, from the shoe polish artisans of England's The Jaunty Flâneur to Montreal's Patrick Marleau, a.k.a. Le Valet Cireur, consider it a liberating higher calling. In Tokyo, Yuya Hasegawa's Brift H Shoe Lounge is deliberately tucked off the beaten path in Aoyama, where he practices the "slow shine" movement standing behind a bar counter. Customers remove their footwear for his hour-long shine process and sit back, flute of bubbly in hand, to watch his cloth-wrapped fingers perform deft movements. His clients liken the shine ritual to a tea ceremony.

Off screen, the revival of the shining ritual extends to shoe maintenance at home, with specialty pastes, glazes and aerosols from heritage brands like Cherry Blossom, Tana and Kiwi (the Australian originator of the consumer shoe care polish formula as we know it). At the luxury end of the market, Italian lifestyle brand Cedes Milano offers a $200 shearling and leather shoeshine mitt. Posh Parisian bottier Aubercy calls its artisan product "the caviar of shoe polish," and commissions it in small-batches while its French compatriot Saphir Medialle D'Or, established in 1925, makes shoe glazes dubbed pommadier creams and pâtés de luxe available through www.hangerproject.ca.

Here in Canada, Walter's traditional mahogany shine stands are a familiar fixture in financial centres and at the Edmonton, Toronto, Montreal and Vancouver international airports. But by popular demand, the Canadian company founded by Ernest Ferdinand Walter in 1893 in Montreal has, since 2012, also operated mobile parlours in Montreal, Toronto and New York. Their pop-up service works special events from NHL hockey games and car shows to weddings and film premieres, like the debut of the Michael Caine/Morgan Freeman buddy film Going in Style. Before stepping up to the booth, Walter's shoe shine specialists must train for two weeks, and not just in the skilled labour itself. "We position it more as a brand ambassador," says marketing manager Susana Guedes. "It's how they make the customer feel. It's not just about the shoe shine – it's a performance." 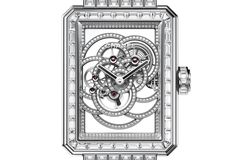 Delfina Delettrez Fendi on growing up in the fashion world
April 4, 2017
Egg on my face: La Prairie White Caviar Illuminating Pearl Infusion, tested
April 4, 2017
Follow Nathalie Atkinson on Twitter @NathAt
Report an error Editorial code of conduct
Due to technical reasons, we have temporarily removed commenting from our articles. We hope to have this fixed soon. Thank you for your patience. If you are looking to give feedback on our new site, please send it along to feedback@globeandmail.com. If you want to write a letter to the editor, please forward to letters@globeandmail.com.
Comments