In a new exhibition on haute couture, mounted at the Hôtel de Ville in Paris (that's city hall) and running until July, there are a hundred extraordinary dresses on display in tall glass vitrines in the Salle Saint-Jean. Spanning more than a century – from the designs of Charles Frederick Worth circa 1869 to present-day Givenchy – each piece is a window into the craftsmanship and creativity that define this rarefied realm of fashion.

But among the Swarovski-embellished evening gowns and strict, tailored daywear, one ensemble appears as an outsider. Designed by Jean Paul Gaultier for his spring/summer 2002 haute-couture collection, it consists of a denim jacket broken up by panels of satiny fringe. Indeed, Gaultier has returned again and again to denim in his runway collections, removing it from its workwear origins and rethinking it as high fashion.

This season, a number of designers are following suit.

Then there are the latest designer denim collaborations. Mary Katrantzou has teamed up with Current/Elliott, lending the graphic money and stamp prints from her spring collection to the denim label's slim-leg jeans and cutoff shorts. J Brand Jeans enlisted London designer Christopher Kane to work on a collection, following its successful collaboration with Proenza Schouler. Included in Kane's range are jeans covered in explosive, abstracted florals and a more contained lace pattern that runs the length of the pant legs.

It's all about variety. Even the April issue of the popular French women's magazine Be is themed around denim. It offers suggestions for making jean pieces formal, hippy, sporty, sexy or Western, along with corresponding makeup tips (apparently silver eyes help glam up blue jeans). There's even an advertisement in the issue for a denim bra top from the mainstream lingerie line Princesse Tam-Tam.

Amid all this, Levi's is celebrating the 140th anniversary of its famous 501s. It's an impressive milestone, yet given the current variety among denim offerings, it also reinforces how far we've come from classic.

For years, the market has cycled through every possible permutation of jean: boot-cut, super skinny, boyfriend, high-waisted. Then came the Crayola hues two years ago. It was only a matter of time before brands starting thinking beyond cut and colour.

Lisa Tant, vice president and fashion editor at Holt Renfrew, suggests that the high-fashion appropriation of denim has something to do with "reverse snobbery." "It's treated in the exact opposite way to how we're used to wearing it," Tant says.

She also points to street style as a heavy trickle-up influence on designers – and how a fabric that carries such a democratic message holds even more allure when transformed into something exclusive.

But for Paris-based Canadian designer Calla Haynes, her denim range represents the opposite. Last spring, her pixilated prints appeared on a capsule grouping from cult denim brand April 77. This year, she decided to produce the jeans under her own label.

"I think it will be easier for women to buy the jeans than, say, a printed [tuxedo] trouser – because of the pricing and because of the easiness of wearing them," she says from her studio. "Even though I have a compact collection, it's important for me to compose an entire wardrobe and jeans are a major part of any woman's wardrobe."

Serge Azria, founder and CEO of Current/ Elliott, agrees. "Incorporating denim into high end fashion lines allows for a more accessible concept and varied audience," he says by email. On the flip side, a designer collaboration means cachet by association and allows him to "transcend denim trends," he explains.

Toronto designer Leilanni Todd worked denim into her first official collection this spring, but it wasn't to follow any trend. It's simply what she likes to wear. Plus, as she jokes, "it's very Canadian to do the denim shirt." Hence a series of fun patchwork tunic dresses and tops, including one that replaces the shirt's denim back with draped jersey.

In Todd's mind, denim must retain some link to its original utilitarian function – as in, no "fancy ballgowns." As proof, she cites the memorable fashion disaster that befell Britney Spears and Justin Timberlake when they appeared at the 2001 MTV Video Music Awards in matching denim ensembles.

Haynes rightly notes that denim's intrinsic properties – comfort and wearability – should always remain part of the design, be it a pair of jeans or a strapless denim dress. Meanwhile, she won't have to think about her own wardrobe for the foreseeable future. "I'm so happy I did eight prints," she says of her line's jean offerings. "I definitely have enough to wear one every day."

The airfare for the photo shoot was provided by United Airlines. Accommodations were provided by the InterContinental Stephen F. Austin Hotel. Neither company reviewed or approved this article. 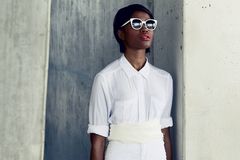 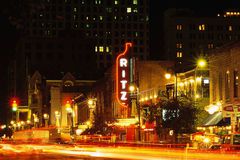 Best-kept denim secret? The hottest brands are Canadian
September 24, 2011
Office fashion: raw denim
April 9, 2010
Follow Amy Verner on Twitter @amyverner
Report an error Editorial code of conduct
Due to technical reasons, we have temporarily removed commenting from our articles. We hope to have this fixed soon. Thank you for your patience. If you are looking to give feedback on our new site, please send it along to feedback@globeandmail.com. If you want to write a letter to the editor, please forward to letters@globeandmail.com.
Comments