The idea of the "exotic" has fallen out of favour. In a shrunken world, the idea that something's beauty lies in an Other, foreign strangeness seems a little racist, or at least provincial. This is mostly good: being Instagrammatically intimate with everyone from Argentinian soccer players to Korean soap stars is a fun way to realize the equal legitimacy of different cultures. But never-ending opportunities to digitally witness new things can lead to a sense of false familiarity. I'm glad that "weird" is no longer an insult, but a little sad that strangeness is now almost workaday, rather than wonderful.

I grew up in Scarborough, a suburb in the east end of Toronto and (as you may have heard a second-gen immigrant kid mention before) felt fairly alien among my peers. By the time I was a teen, all I wanted to do was to head downtown, where the relentless issues of who I was and where I fit in were drowned out by noise and cool stuff. One very downtown thing to do was visit the now-defunct Tower Records, which at the time was a massive, multi-storey anchor at the Eaton Centre, containing endless cultural delights.

Gather round, under– 30s – this was back when accessing information required a bit of legwork. People bought magazines, which were dense collections of words and pictures printed onto shiny paper pages. At Tower Records, the magazine selection was off the hook. I leafed through mags with pictures of hot musicians; back in the day, those weren't beamed directly to your eyeballs every two minutes. I stocked up on free mags that were profanely hilarious (ever heard of Vice?). And, on occasion, I plunked down some after-school-job money on Colors, otherwise known as "the Benetton magazine."

Benetton, the Italian clothing company, gained notoriety in the late eighties for a series of ads showing – wait for it – people that weren't white. These strange creatures were lined up alongside white people, wearing the same well-made clothing. It's cringeworthy now to realize how startling it was to see images of Africans and Asians in mainstream publications, but it was, and those pictures made me feel like I existed. It was exoticism, sure, but I was hungry, so I ate it up. So did the magazinereading masses.

In the early ninties, Benetton upped its game, running super-saturated photos of opened condoms (to address the AIDS crisis) or a nun and a priest kissing (to piss people off). Other than a small, off-centre logo, the ads didn't have a clothing sell, which happens constantly now, but back then was, like, whoa. Next, it launched Colors, a hefty, pricey magazine. Each issue had a theme, like race or war, and featured bitsy-piece images and interviews from around the world (plus lots of full-frontal nudity). It was arty, without bylines, and pretty sincere, without any ads at all. It was a vanity project, yet well worth paying attention to.

I loved Colors, which really made the weird wonderful. As Europeans do, it gave North American culture the same skeptical, campy treatment as everywhere else in the world, which helped me realize that "normal" is a relative term. Plus it gave me really cool pictures to cut out and put up in my locker.

A new 200-plus page retrospective, Colors: A Book About a Magazine About the Rest of the World ($50, Damiani/ Fabrica), that's just been released, is good-looking and enjoyable to flip through, though it doesn't really demand a commitment, which makes it too much like the Internet and less like the groundbreaking magazine that came before the Internet. Like its subjects, Colors was once rare and exotic. Now everything is normal and that's great, but maybe a little sad, too.

From makeup to design, these are fall’s must-read fashion books
June 5, 2017
Polka dots were once a symbol of the plague, and other surprising pattern details
March 22, 2018 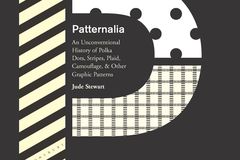