Most fashion-conscious adults have suffered from wardrobe envy, whether it takes place on the street or while flipping through the pages of a magazine. Lately, though, those targets of sartorial longing are as likely to be found on a see-saw as the runway.

“There are kids at my school wearing these thin-knit, heather-grey sweatshirts that I would definitely buy for myself,” says Emily Wesson, a kindergarten teacher at a north-Toronto private school where many of the infant-to-toddler-aged students now dress in neutrals instead of neons and structured smocks instead of superhero tees. These pint-sized fashion plates are part of a growing army of living dolls whose motor skills may still be developing but whose wardrobes are fully matured.

“There is definitely a mix,” Wesson says, referring to the ratio of Dora the Explorer to fashion-forward duds she sees in the schoolyard. “But compared to even a few years ago, there are a lot more kids dressed in muted, adult-friendly colours: oatmeal, olive, black. When I was a kid, I wasn’t allowed to wear black!” 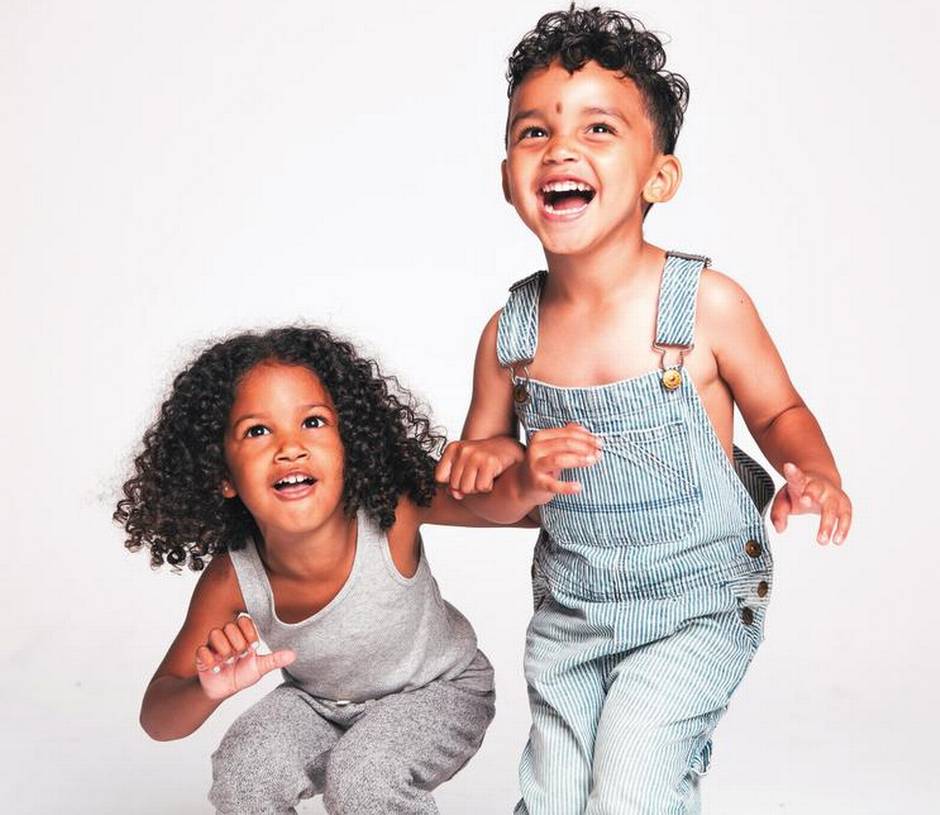 North American children have never been more stylish, thanks to a rise in the number of parents outfitting wee ones in the tasteful, less-is-more togs that have long been the standard in Europe. In particular, logos, sparkles and anything overtly juvenile are out; clean lines, layering, classics from the adult world and hues snatched out of a J.Crew catalogue are in. And they’re everywhere, with junior-chic boutiques popping up between juice bars and reclaimed furniture stores in high-end neighbourhoods across Canada and the U.S. A clear sign of times: Kanye West and Kim Kardashian have reportedly restricted their 15-month-old daughter, North, to a wardrobe of grey, black and cream.

While there may not be anything more adorable than an infant in a cowl neck, keeping them in fashion once they develop their own opinions on dressing is a battle many parents would prefer to avoid. For others, the new trend is a welcome redirect from hyper-branded and overtly gendered wardrobe options.

This penchant for mini-me minimalism marks a definitive shift from the last few decades, when dressing the next gen in distinctly kid-ish clothing was not just a norm but a sign of prosperity. The rise and commercialization of child-targeted fashion coincided with the rise and commercialization of child-targeted everything – from cereal to sleeping bags – in the 1980s. Wealthy Boomer parents gave birth to the first generation of children who had a say in clothing purchases – and retailers started marketing directly to them, pushing candy colours and beloved TV and movie characters. The Disney Store opened in Los Angeles in 1987 and arrived in Canada a few years later, a harbinger of the merchandising mania to come. 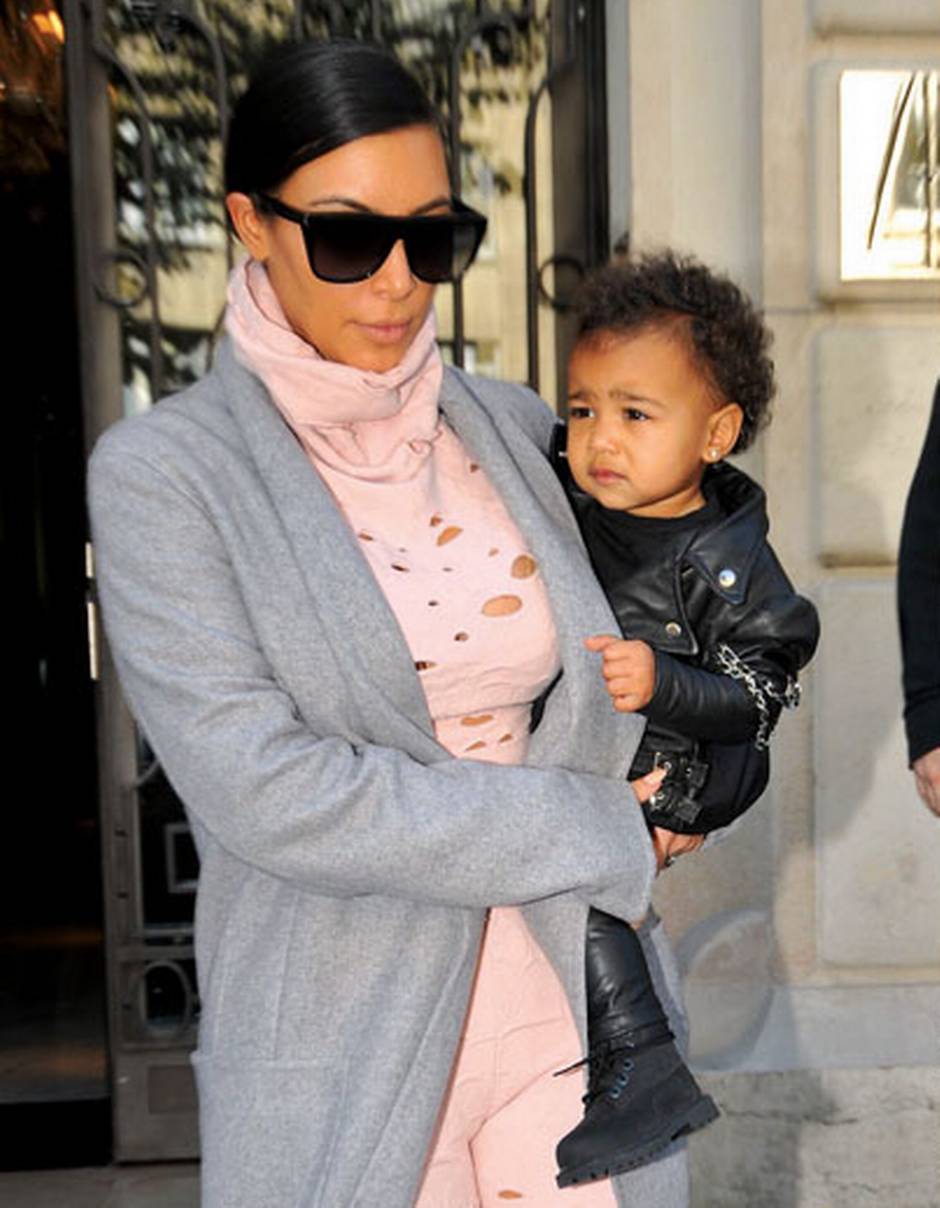 The inevitable backlash has been building steam for some time, spurred (somewhat) by no-logo politics and (mostly) by celebrities like Victoria Beckham and Gwen Stefani, whose frequently photographed offspring are the ultimate stylish accessories. Beckham ignited an international incident a couple of years ago when she dressed two-year-old daughter Harper in a pair of $60 Chloé tights. But #microfashion (the Internet’s preferred hashtag for this trend) isn’t exclusively for rich people.

Affordable chains such as H&M and Zara have entered the well-dressed-tot market – the former introduced a David Beckham “bodywear for boys” line last January, the latter recently took heat for a utilitarian navy-and-white-striped kids’ shirt with a gold star, which, many customers felt, resembled a concentration-camp uniform. The trendy Japanese line Uniqlo has also announced plans to expand its children’s collection, while high-end labels like Baby Dior, Junior Gaultier and Little Marc Jacobs all presented collections at the first-ever Global Kids Fashion Week, held in London last year.

Alyssa Kerbel, a Toronto retailer, founded her children’s-clothing company, Mini Mioche, in 2008. At the time, she had recently become a first-time parent and wanted to dress her daughter in the same basics that dominate her own wardrobe.

“At that point, kids’ clothing in this part of the world was really caught up with the Disney characters, the superheroes and the branded, commercialized stuff that I really wasn’t a fan of either ethically or in terms of fashion,” she says. Kerbel named her store (she now has two locations) after the defunct Toronto retailer Les Mioches, where her own mom went for kids’ wear shipped directly from Europe. “The only clothes that I liked were the ones that my mom had handed down from my own childhood, so I started with a goal of going back to that earlier style and of using quality organic materials that are actually comfortable for kids.” 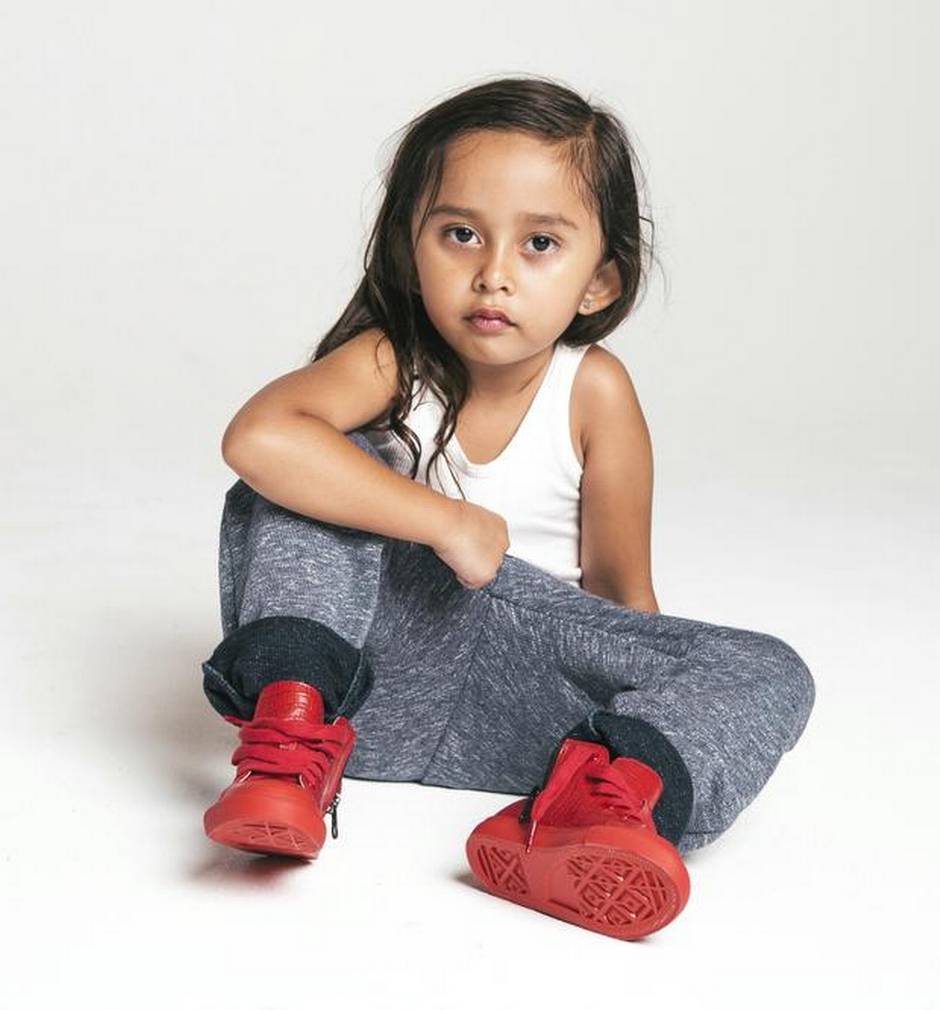 Since introducing her store’s first collection, Kerbel has seen the industry boom. “I think parents have a lot of fun dressing their kids up, especially when they’re too young to voice their own choices,” she says. Clothing from Mini Mioche’s fall 2014 line can be found in the latest issue of Binky, a Canadian online magazine that cheekily bills itself as “a lifestyle guide to the golden years.” The fashion spread features child-sized harem pants, knee-high boots and a $250 opera coat. “It can certainly go too far,” says Kerbel, who avoids clothing that is uncomfortable or wildly impractical. “You see leather clothing or even a lot of denim and you just think, that kid can’t be comfortable.”

On her widely followed Pinterest page, My Imaginary Well Dressed Toddler Daughter, Australian author Tiffany Beveridge parodies this new era of keeping up with the junior Jonses. Beveridge, who has sons, began the project in 2012 as a way to indulge her love of adorable little girls’ clothing. “I started captioning the photos through the lens of a parent of this absurdly perfect little girl [named Quinoa] and the [satirical element] just became obvious.” One recent post features a picture of a stunningly beautiful young girl standing in a train station wearing mini-shorts, a vest, ballet flats and an anklet, along with the caption, “One time when Quinoa and I got separated in the train station, she thankfully remembered our safety training: Stay in one place, look spectacular and don’t talk to poor people.” “That one is about as mean as I’ll get,” says Beveridge, whose book, How To Quinoa, was released this summer. The goal, she says, is to make a point about class by tapping into both the irresistible and questionable nature of picture-perfect kids: “Parents are going to all of this trouble, but who are they doing it for?” she asks.

Emphasizing style at such a young age is something parents should be mindful of, says Lindsay Barton, a Toronto child therapist and development specialist. “There’s nothing wrong with calling the shots in terms of wardrobe,” says Barton. “The issue is that, by obsessing and insisting on what a child is wearing, you are sending the message that fashion and appearance matter a lot.” Allowing a kid to choose his or her own clothing can be a fun form of expression, she adds. But, again, “you want to make sure that there isn’t too much importance attached to the end result.” 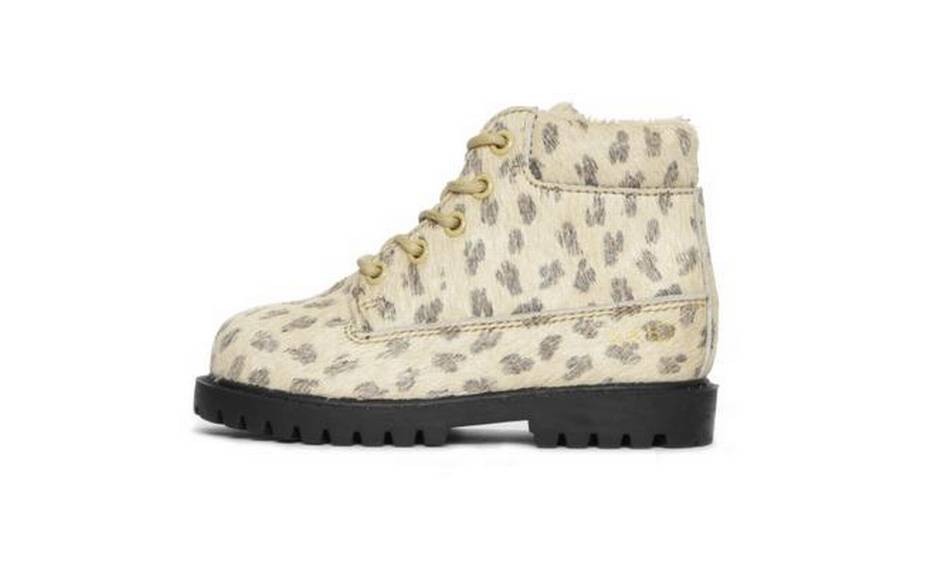 Ashleigh Dempster and Matt George, married co-creators of AKID shoes, have developed a strategy that allows their three-year-old son’s budding creativity and their own fashion ideals to co-exist. “The trick is to fill his closet with clothing that we like, and then let him put together whatever he wants from there,” says Dempster, a frequent best-dressed-list topper in her native Toronto. Now based in Los Angeles, she acknowledges that keeping Jasper away from Ironman is getting harder as he starts school. But she also notes that, in her family, style runs both ways: “Our kids are a huge inspiration. We had a design in our spring collection of bandana-print shoes in two different colours. That came directly from Jasper’s experimenting.”

Wesson, the kindergarten teacher, acknowledges the schoolyard may be the new runway, but asserts that dressing her own four-year-old is another matter entirely. “Obviously, I have the clothing that I prefer – and it’s not the Princess Elsa T-shirt,” she jokes. But, ultimately, parenting is a matter of picking battles, she says, and this one just isn’t front and centre for her.

In any case, she adds, her daughter lights up when she wears a Disney tee. “She really does seem so happy and proud, and that is really cute, too.” 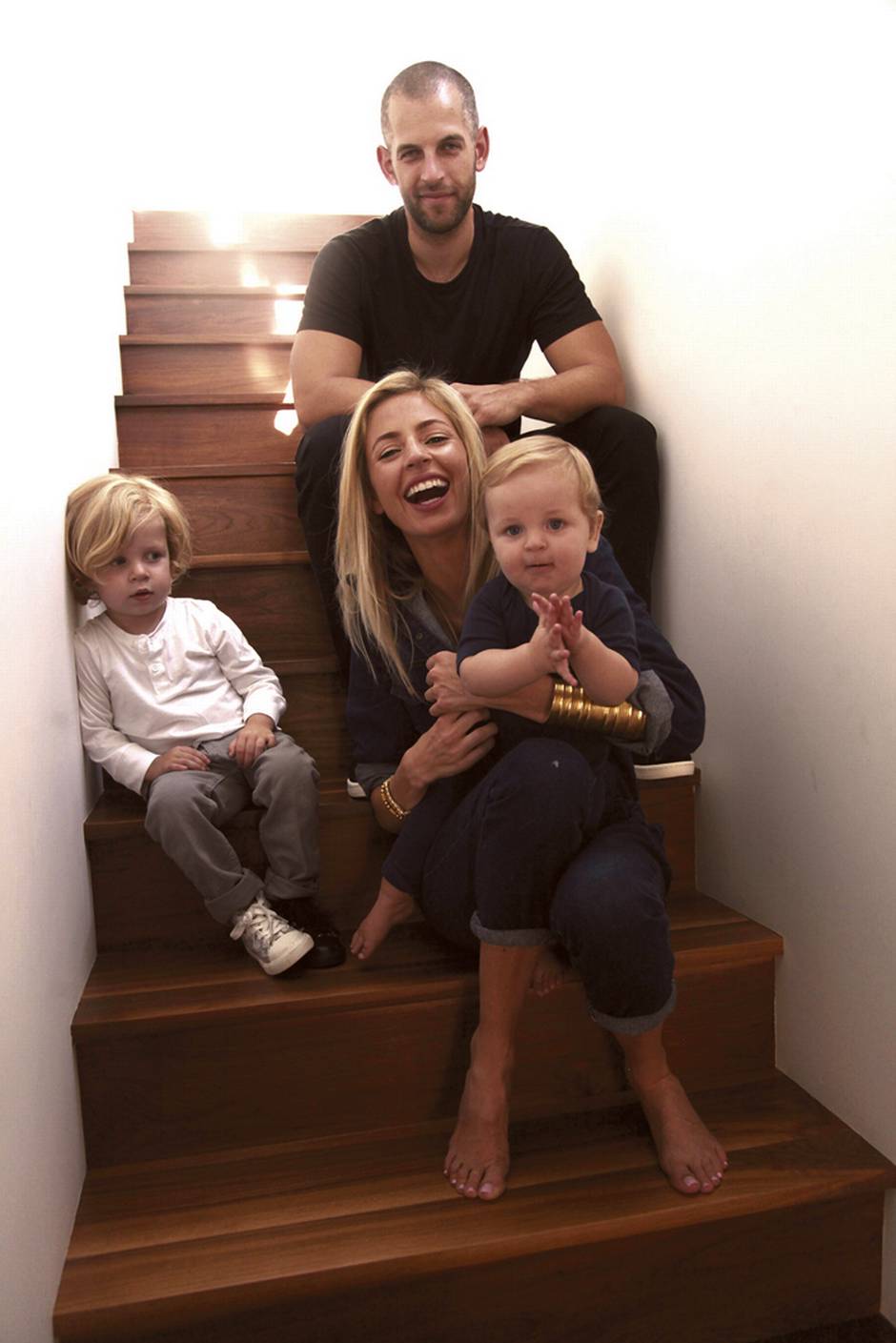 AKID creators Matt George and Ashleigh Dempster, with sons Jasper and Stone. Photo by Jill Connelly for The Globe and Mail

Married business partners Ashleigh Dempster and Matt George have launched a dozen ventures between them, from social clubs to secret watering holes to a brand of coconut water. Based in L.A., the Canadian couple’s latest project, AKID children’s footwear, was a natural fit, considering George’s background selling streetwear and sneakers, Dempster’s fashion-star status and an expanding family that now includes toddler Jasper and baby Stone. Why kids’ shoes? Dempster says she noticed a gap in the market when it was time for her eldest to wear them: “I was looking for something that was more stylish and also more basic – the kind of shoe I would wear, but for kids.” George then went to work researching the specific needs of developing feet. The result is a line of cool-meets-comfy kicks with child-specific details like breathable leather insoles, minimal underfoot padding and convenience zippers that make lace-up boots easy to don. After less than a year on the market, AKID’s camo high-tops, suede moccasins and pony-hair slip-ons have been picked up by distributors worldwide – and, in a PR coup, spotted on the notable little piggies of Kimye progeny North West (in black, of course).