I didn't know that the modernist architect Alfred Loos considered patterns and other eye-catching ornaments to be tools of the hegemonic imperialist status quo, but that's probably just me. I also did not know polka dots were a symbol of the plague until the 19th-century craze for the polka dance changed their status permanently for the better. I was unaware there are only 17 fundamental patterns a wallpaper can conform to, or that technical improvements to the jacquard loom prompted soon-to-be unemployed weavers to join Ned Ludd in 1812 in a campaign of industrial disobedience (hence Luddites) by throwing their wooden clogs, or sabots, into the newfangled machines (giving us "sabotage"). I had no idea West African wax batik patterns – those fat and thin black lines in geometric repetition, at once snappy and soothing – were originally Dutch inventions, and got to West Africa because the Dutch used West African slaves.

That was before I read Jude Stewart's Patternalia: An Unconventional History of Polka Dots, Stripes, Plaid, Camouflage and Other Graphic Patterns ($25, Bloomsbury), which was published this month.

Patternalia is a brisk flip through the sampler of patterns we take for granted every single day of our callow, distractible, fashion-lusting lives. Stewart (her previous book was ROY G. BIV: An Exceedingly Surprising Book About Color) starts with dots and spots (everything from the Japanese enso of zen calligraphy – an always imperfect attempt to draw a perfect circle freehand – to revelations about the quincunx, the five-dot pattern you see on a die and that Thomas Edison wore as a tattoo). She moves through the devil-worshipping history of stripes and lines (that cricket blazer you're eyeing would have been condemned as "devil's cloth" in the Middle Ages, "a garment that is made of two"); downshifts to squares and checks (Britain's Disarming Act of 1746 made the wearing of tartan in Scotland punishable by imprisonment and deportation, but that didn't make the marketing of tartans any less inventive and bogus, as the author reveals); and races through curves and florals (where she traces the world's fivecentury love affair with paisley and its more recent obsession with every form of camouflage, from "dazzle," a black-and-white zigzag used on battleships to confuse submariners, to the digitally pixelated MARPAT soldiers prefer for desert battles today).

Stewart finally pulls up – short, to my mind – at a much-too-cursory contemplation of the mathematics of patterns, and whether they reflect eternal structures. But at 130 pages, there are worse ways to spend an evening than discovering the history of a cummerbund made from striped kente cloth, which the Asante and Ewe people use to send coded messages to one another in Ghana. Prom night may never be the same.

Of course, any writer who examines the ephemera of history runs the risk of studying the unimportant. "Any decoration is futile," the great pattern maker William Morris wrote, "when it does not remind you of something beyond itself." The bestknown patterns have lasted through history because they do. "Polka" dots were first named, it turns out, by an editor at a women's magazine who was trying to capitalize on the insane global popularity of the polka dance between 1830 and 1860. The dance craze eventually died, but the fashionable dots remain, touching everything from politics (a woman in a polka-dot dress was famously a suspect in Robert Kennedy's assassination) to art and music (Brian Hyland's 1960 hit, Itsy Bitsy Teeny Weeny Yellow Polka Dot Bikini).

Patterns connote meaning, even if they converse in a language most of us speak haltingly. The range of a city's brickwork – it's squints and quoins, its sailors and noggins, its flemishes and crosses – can tell its history. Tracing the roots of houndstooth (which hid mud well), Stewart points out that keffiyah, once the proud black-and-white emblem of Palestinan independence, is now sold in blue and white strewn with Stars of David, and also in rainbow. Idi Amin, the butcher of Uganda who killed half a million citizens, wore a full kilt and sporran, and for good reason. He wanted tartan's emblem, the authority of its surface.

A pattern is always a form of algebra, proof that we have managed to tame and order at least a swatch of nature's bewildering randomness. Like a favourite jacket, it calms us down for a bit, before we are forced once again to admit that we're surrounded by chaos.

From makeup to design, these are fall’s must-read fashion books
November 4, 2015
Now that everything is normal, let’s remember a mag that made weird wonderful
November 5, 2015 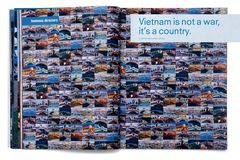