Not many Canadian designers can boast a successful 45-year history, not only inspiring styleseekers, but challenging trends and thinking outside the conventional shoebox. It's something Vancouverbased John Fluevog can be proud of, having created an international reputation for his spirited footwear, with legions of followers who appreciate both boldness and whimsy in design. From Madonna to Alice Cooper, celebrities and style mavens alike regularly look to Fluevog for unique and edgy statements in the shoe department. It all started for the 67-year-old entrepreneur back in 1970, when he returned from a hitchhiking trip along the west coast. Teaming up with fellow shoe designer Peter Fox, they opened a store in Vancouver's hip Gastown district. After a decade, the two split, and in 1985 Fluevog went on to open his own shoe emporium in Seattle – the first of many that would spring up throughout North America. I caught up with Fluevog recently in Toronto at his impressive Distillery District store to talk about the role shoes play in our lives, why he refuses to follow trends, and what it is that ultimately drives him.

I still remember the days when one had a precious handful of shoes in the closet. But now it's like we've all become hoarders, and I hope I'm not just speaking for myself. It seems that we can't get enough shoes.

Is it because we're exposed to so much that we want so much, and it's not just about one look?

Our whole society is sped up. People are more aware of not just shoes, but a lot of things. We're living in bigger cities so people are looking at each other more. There are more options. How you look has become a more important factor. Where you work is important to you, even the kind of building you work in: Is it ecologically correct? It's how you present yourself, right across the board. It's not just shoes.

But shoes drive a lot of it in terms of wanting to update a wardrobe. That's usually the first thing that you look at.

Not very well. You've got size issues. Shoes have to fit and work and function. And they wear out. But there's also so much clothing out there. And it's getting slightly uncool to have so many clothes because of all the environmental issues that are coming up around that. And people want to know where things are made. Footwear at my end of the market is about craftsmanship. They're made by hand in little factories around the world. There's a ton of craftsmanship that goes into them, and they're complicated.

How do you think we'll reflect back on this particular era we're living in?

I'd say we have been going through what I call an "urban farmer" phase. So natural, simple, but yet quite precise. I saw this guy that sold his company for a billion dollars and he's looking like he's wearing Keds. He doesn't look like money at all.

But you still produce a lot of stuff that reflects a very fanciful, very ornate time.

That's sort of the general market. And because I'm a boutique business, I've never really followed exact trends because I can't. It's partly mercenary. I can't compete on that kind of level. And I don't want to. It doesn't feel good to me. So I like doing my own thing and I think that's probably why I've stayed in business all these years.

You have always marched to the beat of your own drum. You took shoe design to a whole other level and did it unabashedly, unapologetically. Where did that attitude come from? Were you just born that way?

No, not at all. I never had a fashion background. I never went to university. I'm dyslexic. I never went to art school. So you can almost say that the business, for me, has been an exercise in me finding out about myself, finding out that I can do things, finding out that what I think is okay. And I hope that encourages people to go and do things. There isn't a wrong. We don't have to follow trends. Following trends doesn't mean that it's right, in fact, it's actually more difficult. Let's be ourselves.

But I'm sure there were times when it was scary for you. There are obviously no guarantees when you do something that it's going to be that original, that unique…

It's true. It's not easy when everyone else is wearing high spiky pointy things to come out with a squat round thing in bright colours. But at the same time there are people out there who appreciate it, and I have loyal customers. I have the blog "Fluevog Friday," where there are people who are just independently following the brand.

The notion of buying shoes online has become increasingly popular.

You've got these impressive bricks and mortar outlets, but how does that compare to what you're doing here on ground level? Well, it's been growing all the time. My stores are like a window to the Internet. Somebody may not buy the first time they come in, but they'll have seen the store, and they'll have confidence because they see the product in the environment. Then when they go home and see it on their screen, they have a better sense of it. We sell a lot of shoes online.

Obviously you're happy to sell shoes anyway you can, but do you think your approach to retail will change much, or will you always be adamant about having your stores as fixtures?

I like that my stores have a good sense of reflection of me as a person. Call me an egomaniac, but I just like the way that feels. So yeah, I love my retail stores!

How driven are you these days? Are you at a stage of your life now when you feel less angsty about things?

I'm angsty every day of my life! As you can imagine, there are a lot of wheels flying around in a company like mine. There are factories all around the world, I've got leathers importing into different places, I've got price issues I'm dealing with, I've got all the heels and components, and I've got 3-D images flying around, I've got stuff in all the retail stores – inventory control issues and cash flows. So there is that side of me. But I guess I have two sides to my brain. I can go to this one that lets it all go and I just go zooming off, and the other side I come back and I come into a retail store and I go, "Get this store cleaned up, it's a mess! I want this changed, get me that fixed, blah blah blah," because it's business right? I have to have both.

What excites you the most now, looking toward the future?

You know what gets me going? Shoes. I love doing them. I see things in my mind's eye and then I enjoy being able to draw them. And I give them to my design team, and they go off and produce them. And then when I start to see it emerge as a collection, it's fun. It's exciting. And I like working on cars and customizing them and I like building my apartment and homes and furniture and stuff. As a designer, you like designing, right? I've always been interested in how things look. It's important to me. I will go to no end just to change some tiny little detail because I don't like the way it looks. So I just love how lines and shapes and colours make people feel. When I'm designing things, I have a sense of how things are going to make somebody feel. It's an emotion, and that's what fashion is all about: It's a feel-good thing. And it's a way of telling people who we are, what we're up to. And I believe it's a way of communicating with the creator. I think we're all made individually, we're all made perfectly, there's no mistake with whatever we are and who are… It's taking this pleasure in who we are.

Designer John Varvatos has always understood the essence of cool when it comes to dressing guys
November 5, 2015 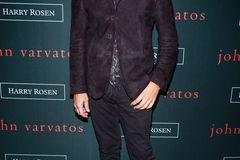 Karin Gustafsson, head of women’s-wear design at COS, on the power of understated fashion
October 29, 2015 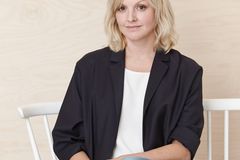 Princess Tatiana of Greece on the importance of social responsibility and the comfort of leading a normal life
October 22, 2015 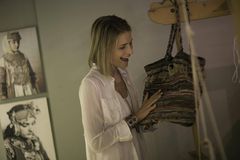