Sonja Bata will be the first to tell you that the right shoes can give a woman a certain strength and pride and self-confidence. "A shoe can enhance the look of a woman and make her look better and feel better and do better work," the 88-year-old stated during my recent visit to her Toronto penthouse apartment. It's precisely this passion for people that inspired her to begin collecting shoes more than 60 years ago, and eventually open the Bata Shoe Museum, which celebrated its 20th anniversary this week.

Born in Switzerland, Sonja Bata originally dreamed of being an architect. This plan was derailed when she married the late, gallant Thomas Bata, the son of a prominent Czechoslovakian shoe manufacturer. Bata had emigrated to Canada at the beginning of the Second World War, determined to carry his family's torch after his father's Czech business was nationalized under the communist regime. Bata's young wife, Sonja, threw herself into her husband's new enterprise with gusto, resulting in decades of shoe collecting and study of their historical, social and cultural significance.

Today, the Bata Shoe Museum she founded boasts one of the largest ethnological collections of footwear on the planet and is one of the most highly respected institutions of its kind. The museum's newest show, Standing Tall: The Curious History of Men in Heels, opens this weekend. I spoke with Bata about her beginnings as a collector, our culture of excess and the future of footwear.

How did your passion for design evolve?

I was brought up with the classical languages of the Romans and the Greeks – of appreciating real beauty, something which was eternal, which was made forever. I could admire a Parthenon's perfect shape, because it has this very perfect line. I never liked Disney type of effects. I liked the purity of a superbly, beautifully proportioned building – something that was built for eternity and would last for eternity. So I was always intrigued: How do you get perfect beauty? Already as a teenager, I wanted to be an architect. I wanted to build things. I was going to be one of these people who was going to build one of those things somewhere.

You got involved in the shoe business thanks to your late husband, Thomas. How did he manage to sway you?

When the war came to an end, Tom wanted to get married very badly. But I didn't want to get married at all! I wanted to study architecture. But it was 1946. It was difficult, because Europe really was destroyed to a large extent. Tom had lost everything in Czechoslovakia and wanted to marry me as a partner, really. And he made it quite clear. It wasn't a love marriage, because I had lots of boyfriends and flirted with them. But Tom was so different. I mean, Tom was somebody I respected and I admired. Tom's father wanted to change the world. He wanted to put shoes on every barefoot person in the world! But then when it came time for Tom to take over, he wanted to create empowerment in developing countries and create jobs for the people. So it didn't really have to do with shoes. It had to do with how to help people to live a better life.

What was your first real foray into the shoe business?

Well, I always thought if you want to be helpful, learn it, find out about it, become skilled at it so that you know what you are talking about. Don't talk hot air. So I took courses in shoe design and then I started studying the type of people who were wearing these types of shoes, and I went to sell some shoes in one of our shops and was that ever an eye opener! People actually came on Monday to put down money for a shoe they wanted to pick up on Saturday because they didn't have enough money. That never happened in my family! So, I decided I had to get to know people worldwide and why they are the way they are and what makes them so different, and why their tastes are so different. So I started with a market-research collection and I travelled to many parts of the world where people didn't even wear shoes, particularly in Africa and the Far East. I was watching what on earth did people wear to the market when they bought their vegetables? What kind of shoes did they wear, and why?

Why were they so totally different in shapes and patterns? The way they were made, the way they were decorated. You'll find that shoes are part of the material culture and they reflect your own cultural tastes and status in society and your upbringing, your village, your region your climate – all these various things. It becomes totally fascinating.

So when did you start actually collecting all these shoes?

Almost right away. I would give women shoes to try out and then they'd come back and report in. I was interested in conducting these studies because I was so interested in how they saw the details that I didn't see. To me, they were not important, but to them they were very important. And then I started to realize that it's only Western culture that has fashion. No one culture in the world has the fashion we have.

A lot of modern women are shoe obsessed. We used to have a few pairs in our wardrobe and now you can never have too many. How do you view this kind of excess?

We are buying a lot of junk, which we shouldn't buy and which we should recycle and reuse. You should tell the people who just buy a pair of shoes to go with an outfit and then it goes in the wastebasket to be ashamed of themselves, because that is wasted material and with climate change, we cannot afford it.

But I think the shoe business is going to change. I believe that five to 10 years from now, shoes will be custom made for you. And you'll be able to get them in two days, in any colour you want. Many companies are already doing that now. They customize the shoes, particularly pumps. It makes sense for a variety of reasons.

What pleasure has it given you to create a museum of this nature here in Canada?

I'll tell you what I really love in Canada. We do have a lot of children who haven't got English as a first language, who come from all over the place. They come in [for] special classes. Frequently they have difficulty talking to one another. We take them and put them in groups of eight to 10. In one group, we feature a Persian shoe and I ask one chap who is a Persian to tell me about the shoe. Why is it made that way? And, what material is that shoe made from? And his English is very poor. So I say, "Don't worry. We'll help you translate. Just tell us why it's made this way, what it's made of and who makes the sole? Your mother, father or uncle? And before you know it, this young man is so proud. "This is from my country and this is what my people wear in my country," he says. "In my village, I don't wear this any more, but as a child I used to wear that." And that is something from his home that he is telling his new Canadian friends. There is a certain pride in saying, "Look, that belongs to me and that is my background and where I come from and I am really very proud."

It's incredible the stories shoes can tell about people.

I am fascinated by people and with what is important to people and what makes them happy. And I hate people who are superficial, who have a superficial flag and wave that flag.

What is it that keeps you in the game?

I think first it is a curiosity. I think, there must be a better way of doing things, and then I find the right people to work with.

You just basically want to make the world a better place.

I like to start something and then find the people who build on it and make it better and improve on it and then maybe do something different. 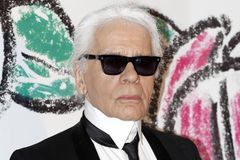 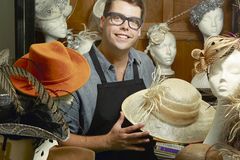 Dee Ocleppo on her handbag line, her love of challenges and what husband Tommy Hilfiger has taught her
April 29, 2015 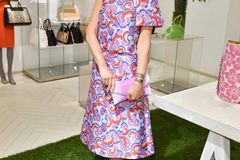