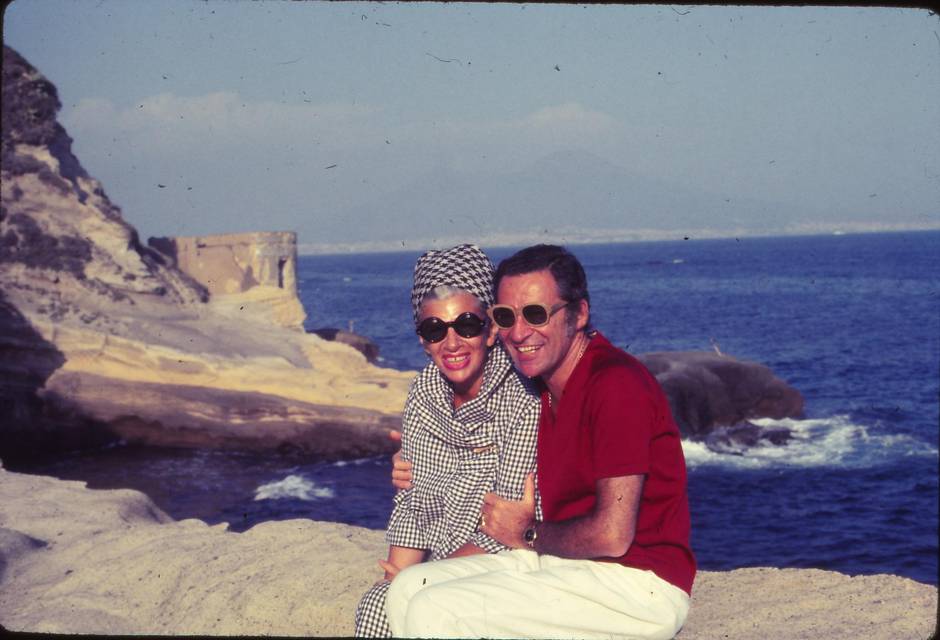 A few weeks ago, while scrolling through my Facebook feed, I came across a meme that stood out among the usual mire of inspirational quotes. It was an illustration of a grey-haired woman loaded up with accessories; bright blue eye shadow was slicked across her lids. The text read, “One day I’ll be a crazy old lady weighed down by all my baubles and it will be fabulous.” What struck me most was the inherent sadness of this internet flotsam – that being loud, bold and self-possessed was for those who were too old to give a toss. I’m 33 and I’ve always been drawn to the unusual, the wacky and the over-the-top. I’ve never worried that I’d look too zany to pass muster in public settings. Sure, it can be lonely being the only one not wearing an LBD at a wedding, but I don’t know any other way to be. Thankfully, almost a decade ago, just as the Metropolitan Museum of Art’s Costume Institute was opening Rara Avis, its retrospective on Iris Apfel, I caught my first glimpse of the uproariously dressed former textiles manufacturer in a magazine. Her piled-on jewellery and outrageous use of colour and patterns seemed to say, “Don’t worry. You’re not alone.” 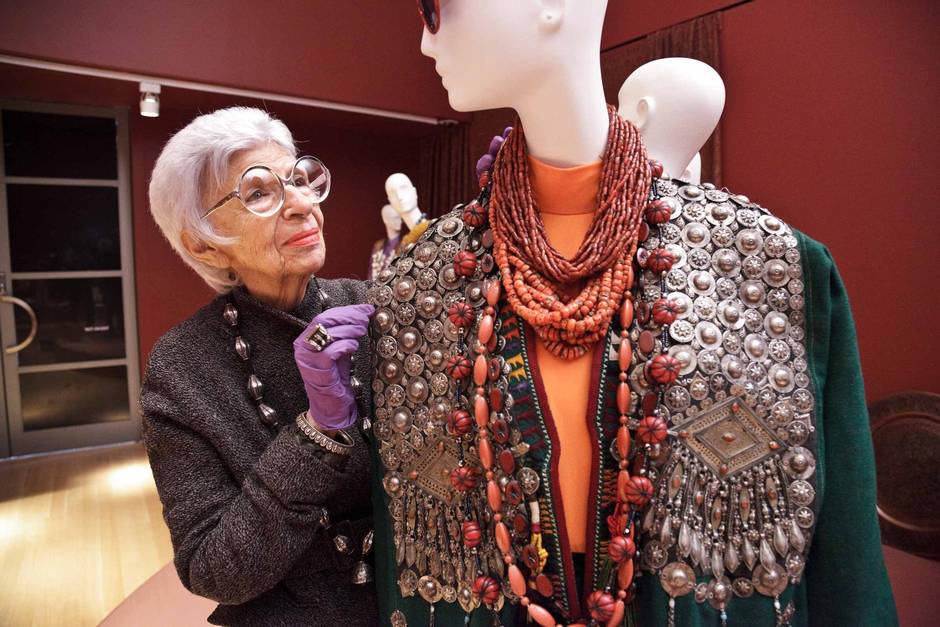 The article, timed to the Met’s show, positioned the co-founder of the renowned textile manufacturer Old World Weavers as a newly emerging style icon. As I learned more about her, it became clear that it wasn’t Iris’s age that informed her look – she’d always been eclectically dressed, drawing inspiration from her world travels. It was that throughout her life, she’d given herself permission to have fun with style – and that’s an idea anyone of any age can easily adopt. 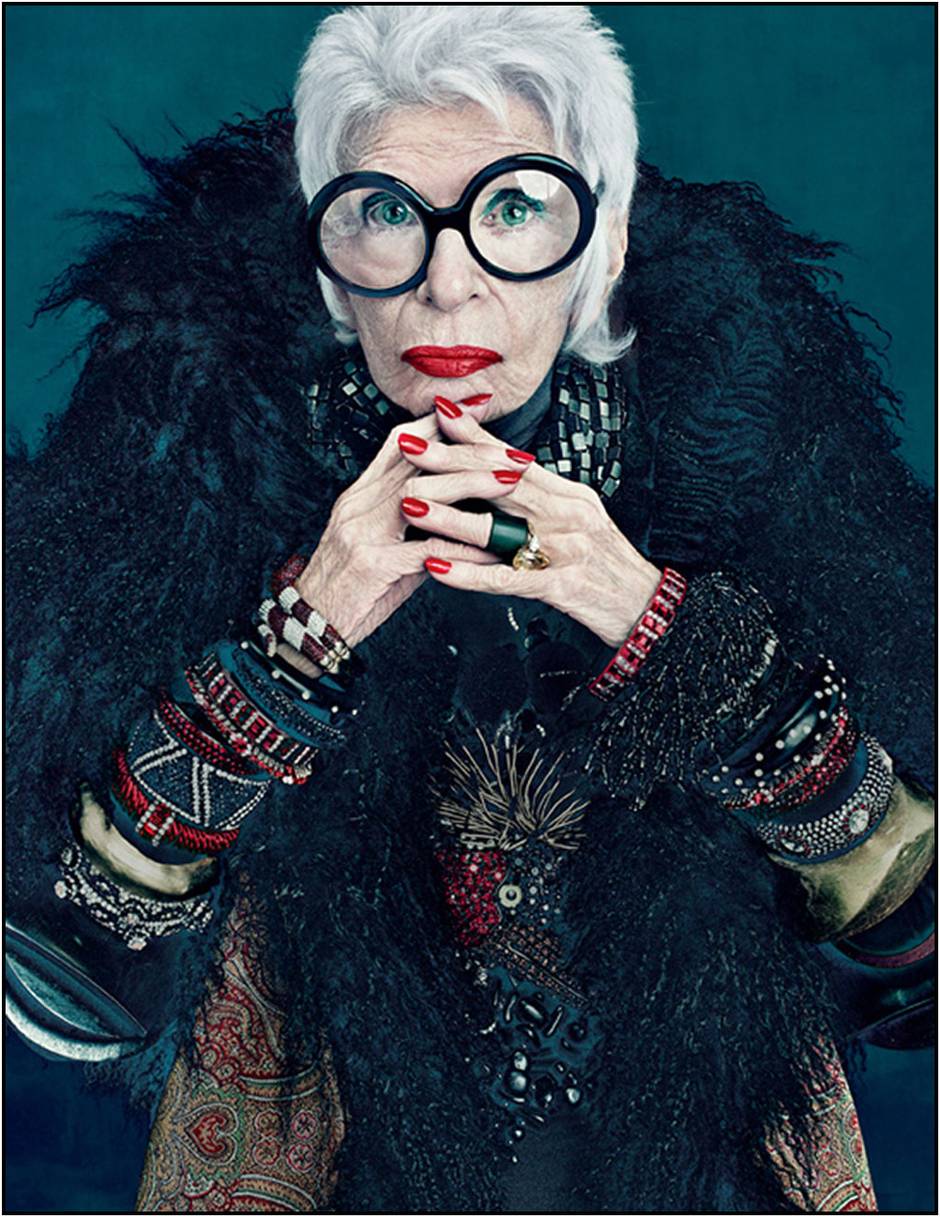 I spoke to 93-year-old Apfel this spring while she was promoting Iris, the newly released documentary Albert Maysles made about her, and asked her how she felt about being a fashion muse. “It’s not a life’s work for me,” she said, explaining that she’s reluctant to overthink it. Though the film – to be released on DVD this summer – crafts a fashion-loving fable of Apfel and her husband, Carl, she claims she isn’t preoccupied by how she looks. “I think dressing is fun, it’s creative, and it could help a lot of people out of the doldrums,” she adds. 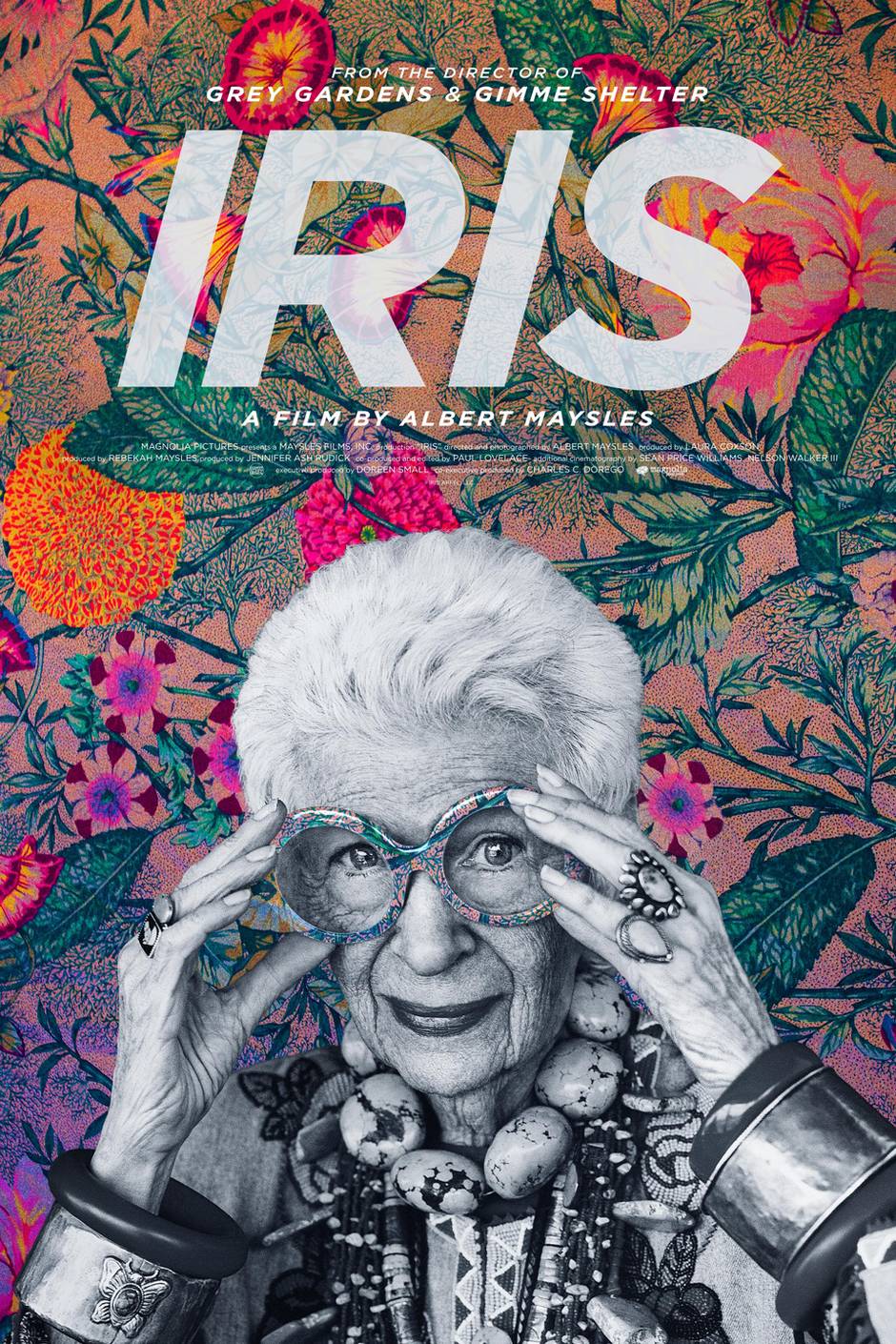 If anything weighs heavily on Apfel, it’s that “everybody looks alike.”

It’s for this reason that she’s quick to dismiss being called a ‘fashionista,’ adding that fashion is, and consistently has been, “too dictatorial to women.”

Perhaps ironically, her irreverent appearance has heavily influenced the world of fashion. Vogue Pelle ran a spread called ‘Be Inspired by Iris Apfel’ in 2010, and Iris herself made a splash as the cover girl for the U.K. publication Dazed & Confused in 2012.

Top designers including Dries Van Noten and Duro Olowu appear in the documentary, a testament to her appeal as a runway inspiration; even Kate Spade, the twee American mega-brand, cast Apfel in a recent advertising campaign. 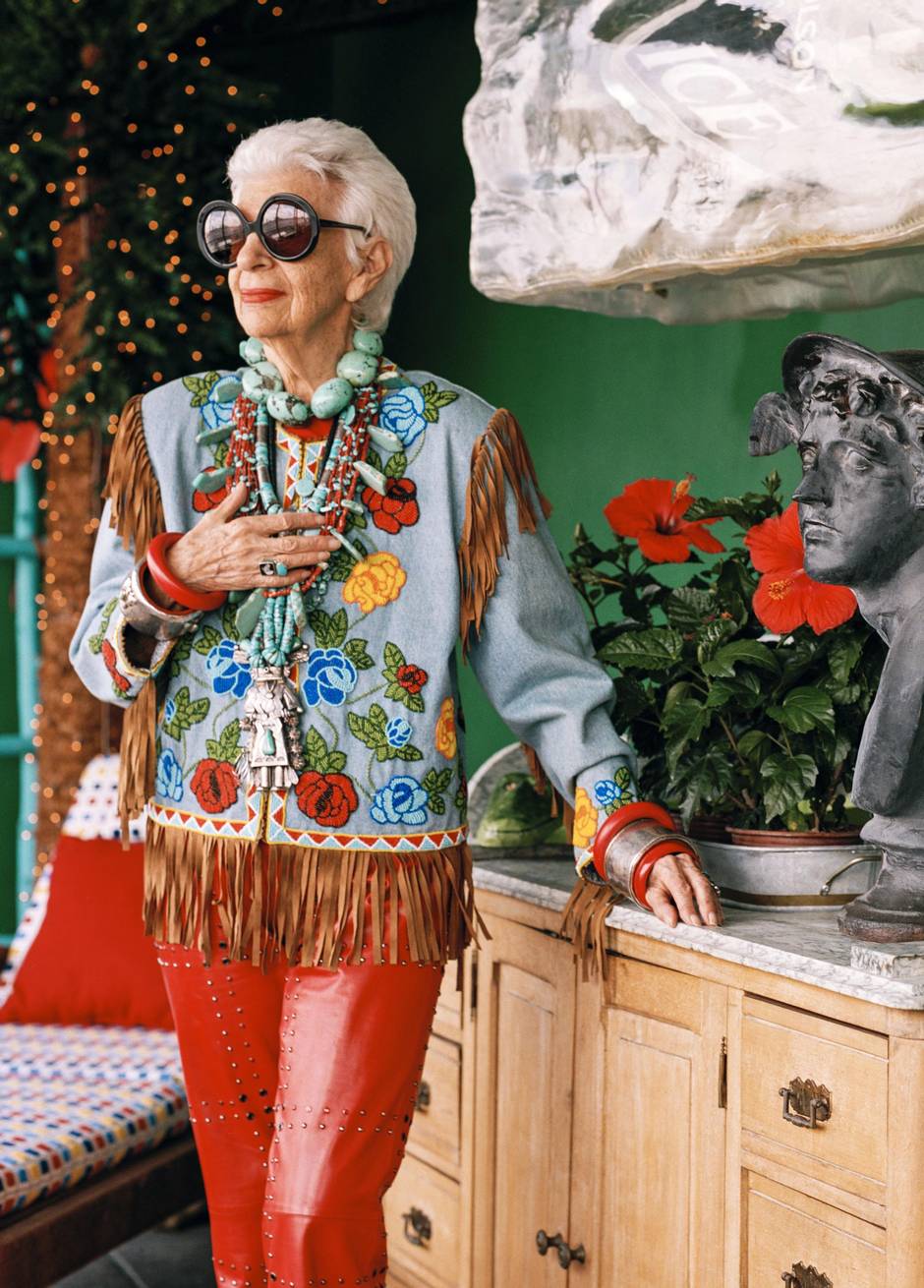 Still, Apfel maintains enough distance from the fashion world to see it through a critical lens. In Maysles’s documentary, she interacts with two of the most potent personalities in the industry – J.Crew creative director Jenna Lyons and rapper/ Adidas collaborator/fashion designer Kanye West – while attending the Council of Fashion Designs of America Awards.

I asked her what she thought of the pair and she pulled no punches: “I think Jenna is a very talented, savvy lady. You mustn’t put her in the same boat as [West]. He’s a very nice guy as far as I know, but he’s certainly no arbiter of taste.”

In a funny way, neither is she. While Apfel has earned the badge of style icon, she isn’t a trendsetter – her initimable look is a tangle of flea-market finds and high-end pieces that ascribes to no seasonal or of-the-moment aesthetic. Neither is she comforable “sitting in judgment” of how others dress. 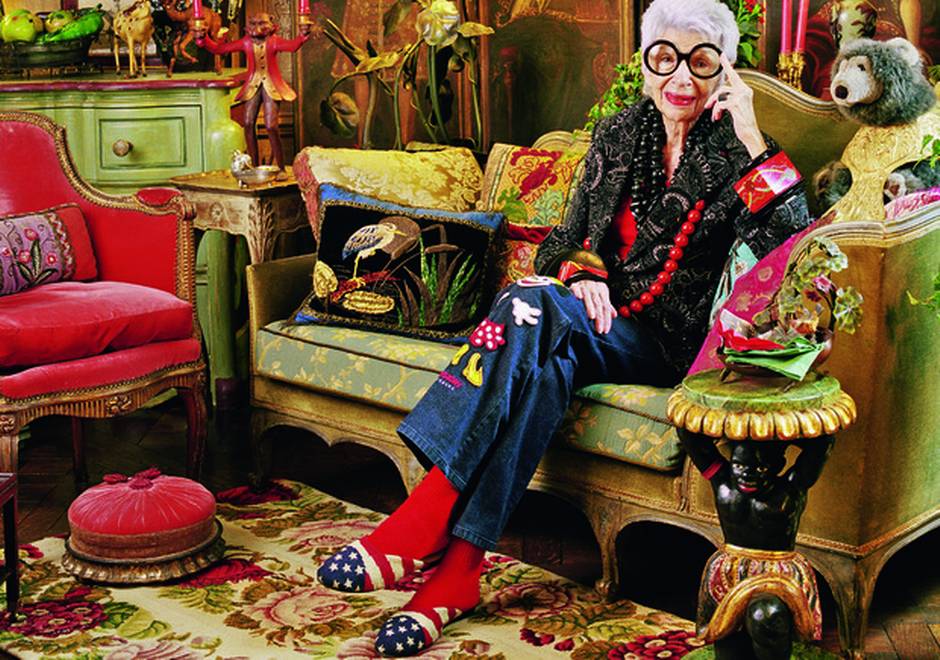 Even after lamenting the casual state of most people she passes on the street (“Half the world seems to walk around as if they’re on their way to the shower or the gym”), she quickly adds, “It’s just my opinion.” It’s an addendum I’ve often had to tack on to my social media posts complaining about those who wear leggings as pants – the sartorial habit I loathe above all others. I recognize that while wearing tights as pants is not for me, my preferred mode of mixing as many prints and patterns at once is, likewise, not everyone’s cup of tea. Which is why the most important lesson I’ve taken away from my avid observance of Apfel is how she sums up other people’s opinions of her style: “If they don’t like it, it’s their problem, not mine.” 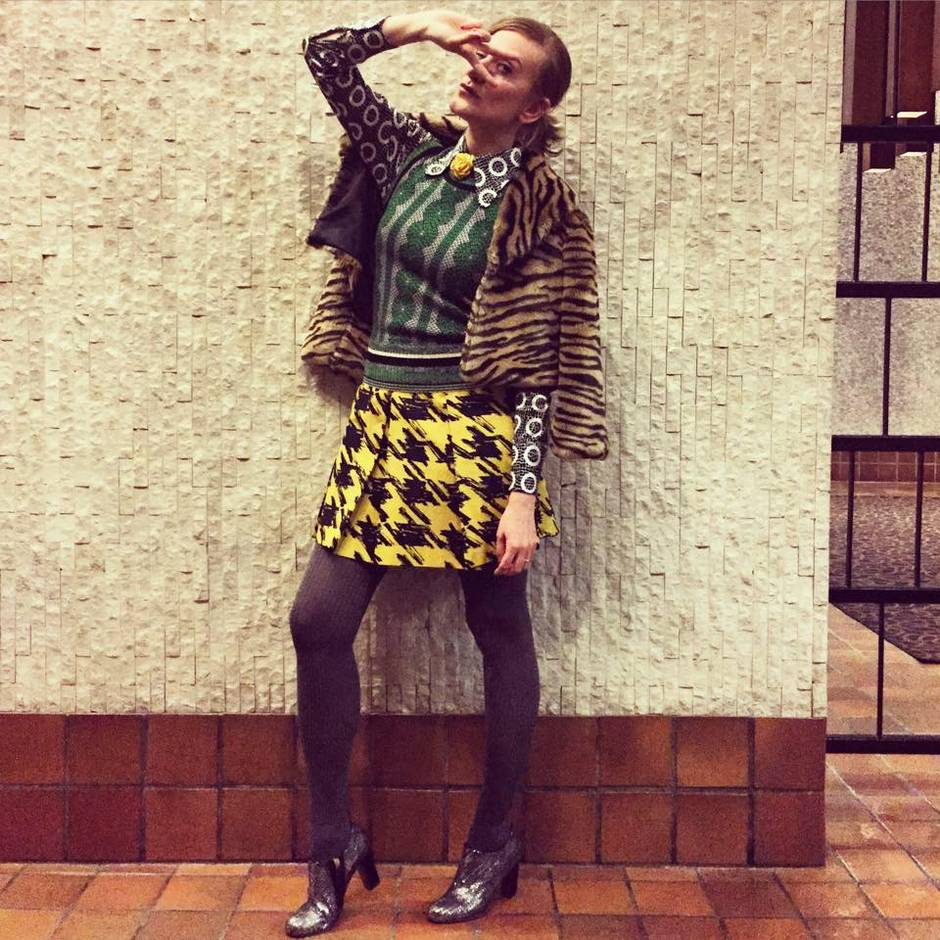 The Apfel of her Eye: Globe Style fashion editor Odessa Paloma Parker, above, feels a sartorial kinship with textile titan Iris Apfel, who is known for liberally mixing colours, patterns and layers of accessories in an offbeat way. Photo by: James Harrison
Follow us on Twitter @globeandmail Opens in a new window
Report an error Editorial code of conduct
Due to technical reasons, we have temporarily removed commenting from our articles. We hope to have this fixed soon. Thank you for your patience. If you are looking to give feedback on our new site, please send it along to feedback@globeandmail.com. If you want to write a letter to the editor, please forward to letters@globeandmail.com.
Comments