If you’re a fashion fan, you probably spent a good chunk of the past month online, poring over the hundreds of spring 2016 collections that debuted in the major runway capitals of New York, London, Milan and Paris. And while dedicated followers were likely able to pinpoint a collection or two that were #wardrobegoals worthy by the time the shows wrapped up last week, the catwalk marches themselves probably started to blur together. (Where did I see that amazing embroidered midi skirt again?)

In the long-ago pre-Internet age, fashion shows evolved from the need for a space and time where designers could present their wares to an audience in the business of buying and selling clothing. Today, there are numerous alternate ways that designers can showcase their latest work (hello, Vimeo!), and in an incredibly crowded marketplace, capturing the attention of an often-jaded fashion week crowd can be a major challenge. (In a recent editorial for the Business of Fashion, founder and editor-in-chief Imran Amed wonders, somewhat cynically, whether anyone will actually care about the collections by the time they turn up in stores.) Which begs the question: Why bother with the runway at all? 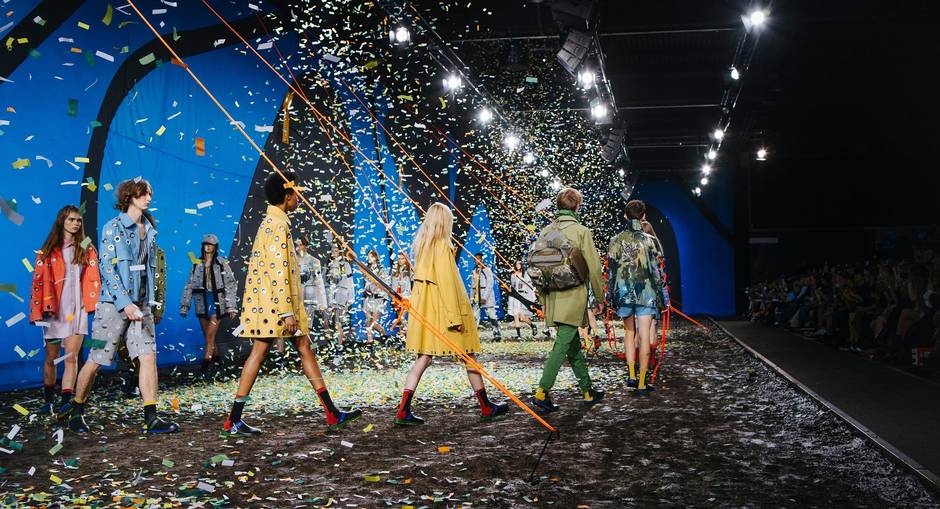 Brands like Hunter have reinvented themselves with an over-the-top approach to runway shows. (Photo by Dan Medhurst)

“We actually advise most designers not to do shows, or at least to approach with caution, because a really great runway show is one where the collection has something really strong to say,” says Caroline Rush, chief executive of the British Fashion Council. Translation: If you’re not in a position to stage something truly stirring, perhaps you shouldn’t bother.

In fact, many designers do opt out of the runway game. “I’ve always preferred to host one-on-one appointments with buyers and press,” says New York-based designer Nili Lotan. “Occasionally, I’ll host an intimate presentation at my studio that incorporates an artistic component or unconventional format, such as a modern-dance performance.” Lotan’s non-traditional approach seems to have paid off. Since 2003, her elegant, slouchy staples have drawn rave reviews and a chic clientele – all without the help of a runway presentation.

For Nicholas Mellamphy, vice-president and buying director for The Room at Hudson’s Bay, however, the runway remains ground zero for selecting pieces for the upcoming retail season. “Seeing the show, I get an immediate sense of the energy and reaction to a collection, even possibly to an item,” he says, citing Rodarte’s 2014 Star Wars frocks and Mary Katrantzou’s 2011 lampshade skirts as two past must-buy runway revelations. “I find it extremely important to have that visual and that sense of community.” Brands like Tommy Hilfiger and Hunter, which have made over-the-top shows part of their marketing strategies (the former recreated bohemian Mustique for its September presentation, while the latter channelled a muddy British music festival) capitalize on the social-media-friendly scenes and critical mass that come from a blockbuster outing. 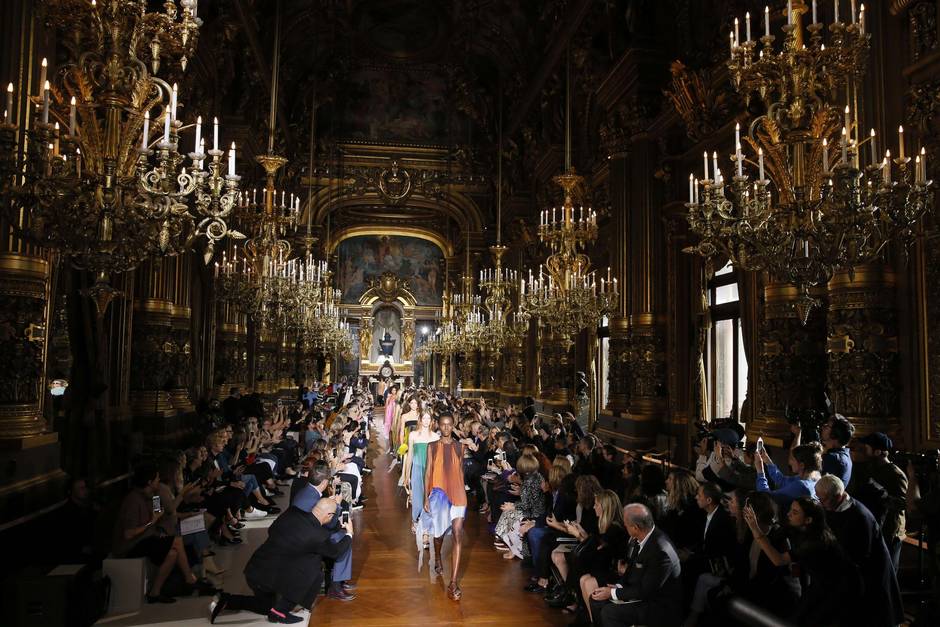 Spring/summer ready-to-wear collections seen in Paris this month included a crowd-pleasing runway show by Stella McCartney, set in the operatic grandeur of the Palais Garnier. (Photo by Patrick Kovarik/AFP/Getty Images)

Many young designers admit that putting on a full-fledged fashion show feels like a rite of passage. “I love every part of it, from the music to the lighting and model casting,” says Toronto-byway-of-Sydney designer Hayley Elsaesser, whose presentations – including her upcoming World MasterCard Fashion Week show on Oct. 20 – showcase signature riotous prints paraded down the runway by a cast of refreshingly diverse faces. “Runway shows can bring the collection to life.”

What role the runway plays in a relatively miniscule market like Canada is often a big question mark for the local industry. Toronto’s fashion week calendar is sparse, and the event opens after the international shows and much of the buying season have wrapped. But, as Carolyn Quinn, director of fashion events and properties for IMG Canada sees it, Toronto’s event still provides Canadian talent with much-needed exposure in a burgeoning retail market. “The city itself has evolved significantly over the past few years, garnering the attention of major North American retailers like Nordstrom and Saks Fifth Avenue,” notes Quinn. As a result, the event is more focused on marketing to consumers, which, in an age when many designers retail directly to shoppers and can harness an enthusiastic audience’s Instagram accounts to drive sales online and in store, finally makes sense. A label like Pink Tartan stands out by casting big international runway models who can be too pricey for the upstarts on the calendar. Mikhael Kale fills the audience at his presentations with socialite fans wearing his futuristic frocks and the off-runway people watching often rivals the spectacle on the catwalk. 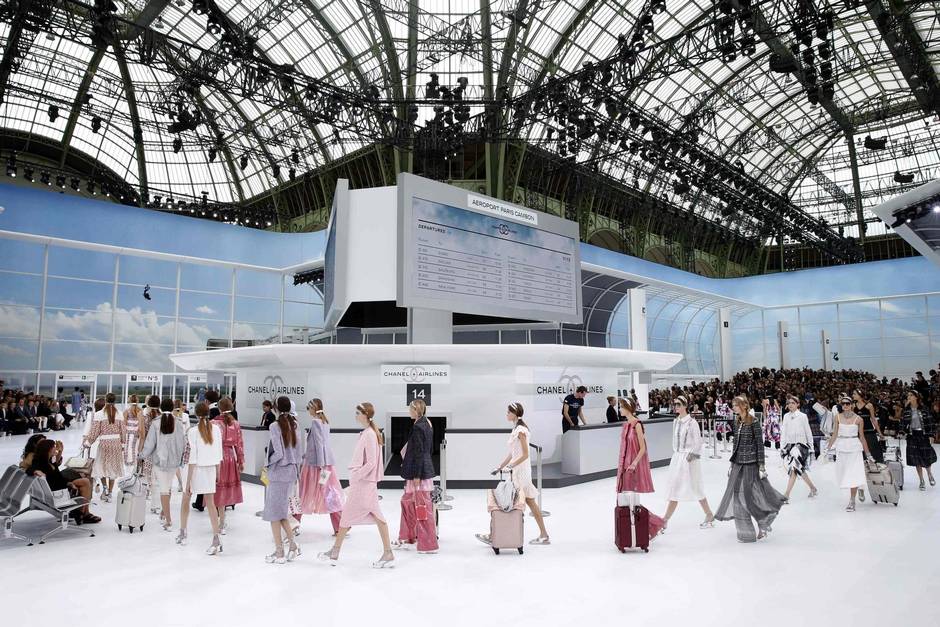 Paris runway show by Chanel designer Karl Lagerfeld, who transformed the Grand Palais into an airport. (Photo by Benoit Tessier/Reuters)

At the heart of the to-runway-or-not-to-runway debate, it’s that notion of spectacle – the glamour, buzz and sheer fun of a brilliant runway show – that continues to sustain the medium. For most of us, that means flocking to the brand-new Vogue Runway website, which kicked off its comprehensive fashion week coverage last month and holds within a staggering one-million-plus image archive of shows dating back to 1999. (Maybe now I’ll be able to track down that embroidered skirt.)

But for industry insiders, is the fashion week grind – Band-Aids, exhaustion and all – ultimately worth it?

“I love it!” says Mellamphy. “So many people get so jaded, but it’s such a treat to go. You know, I love the whole spectacle – not just the fashion, but the energy in the room. To be in the room…” Mellamphy trails off, clearly lost in a runway-induced reverie. “It’s the difference between seeing a concert live and seeing a concert filmed. It’s not the same.”