"Fashion fatigue is a very real thing," Jarrad Clark says over the phone from his home in New York. The director of global production for IMG Fashion, a company that puts on fashion extravaganzas from Manhattan to Istanbul to Sydney, isn't talking about exhausted runway models. Rather, he's referring to how too many shows, unveilings and other events in or around given fashion weeks can tax the media and dilute impact. And he hints that such fatigue may be plaguing Toronto, where World MasterCard Fashion Week has been operated by his company since August, when it added the event to its international roster.

Last season, Toronto's official showings – the first under IMG's oversight – were only one set of catwalk parades over three weeks in the city, where offsite productions, rogue fashion weeks and off-calendar independent presentations have been common since former Toronto Fashion Week diva Robin Kay first came up with the idea for the event back in the 1980s. In other words, a scattered roster, reflective of an incoherent industry, has been the norm. So how does an international conglomerate like IMG cure Toronto's runaway runway problem?

The answer, in Clark's view at least, is obvious: Create a unified front. Under the firm belief that one week is stronger than many, IMG aims to bring together, starting with this coming week's event, Toronto's segregated fashion calendar – whether it's under their tents or not.

"As an industry coming together, we can make a lot of noise and send out a very sophisticated and creative message to consumers in not just the local market but also to a worldwide audience," Clark says, citing his company's efforts to extend an olive branch to the local industry and clean up the country's biggest fashion event.

"There is no rule that you have to be on site with us," he explains. "We'd just prefer it if everyone is coming together to maximize the outcome for everyone participating, whether it's the industry coming to do business, designers maximizing the number of people seeing their shows or just the media being able to take it all in under one umbrella."

Among the groups that IMG has brought onboard for the upcoming fall 2013 season, which kicks off Monday, are the Toronto Fashion Incubator and The Collections. Both institutions represent up-and-coming talent and both have shown elsewhere in previous seasons.

Susan Langdon, the executive director of TFI, was initially approached by IMG for ideas on how the community could work together. After discussing its own involvement, TFI decided to add its press and buyer's event, a boutique trade show previously held off site, to the official calendar.

Langdon sees this as an opportunity for the industry to get greater exposure and to make new connections through IMG's reach.

"Canada's a small market. We all need to work together to make it unified. One voice is certainly stronger," she says. "[A single week] will grab the attention of more media and more retail buyers from around the world – and IMG is a highly credible organization."

Dwayne Kennedy, co-founder and fashion director of The Collections, a group that represents such buzzy labels as Chloé Comme Parris and Sid Neigum, presented off-calendar last season after four successful stints under the official tents.

"[The event] was going through a transition with IMG," Kennedy says of his decision for the brief change of venue, adding that timing issues with his designers conflicted with IMG's dates.

"I think last season was a bit of a shock," he adds. "The calendar wasn't very full; it was down 50 per cent from the previous season. I think they took away a lot of lessons from that and are trying to fix the problems. They're really trying to figure out the Canadian market. They realize it's not the same as New York."

One similarity that Toronto does share with the Big Apple is that both cities are home to designers who prefer to show outside the official venue. In Canada's biggest city, industry veterans – and brands that already sell well, such as Mikhael Kale and Greta Constantine – will still be presenting outside official event dates this season.

"Look, there will always be a few designers who want to show a few days before or after because they want a longer lead time or because they want specific models or there's a space that triggers their creativity," Clark admits. "What we need is for everyone to understand that coming [together] within a smaller time frame [is] not going to create that fatigue."

Indeed, even the ShOws, Paola Fullerton's event for Canadian labels such as Jeremy Laing and Jean-Pierre Braganza that show internationally (it wrapped on Thursday), has spoken to IMG about adjusting timelines – last season, Fullerton's shows conflicted with those from The Collections – and shifting the focus back to the designers.

But while IMG has made remarkable progress in a very brief period, a unified calendar is still a work in progress, Clark admits, pointing out that conversations with designers and organizations have to happen regularly.

"[We want] to be supportive of designers, both relating to fashion week and outside of the two events," says Carolyn Quinn, the director of IMG Fashion Events & Properties Canada.

"We produce an event twice a year but there are 365 days in that year. It's important for us to be building relationships and reaching the industry on an ongoing basis," she adds.

To be sure, it's that promise of continuous support that has piqued the interest of groups like TFI.

"If IMG has the clout and reputation that I believe it has, then let's give them a chance," Langdon says.

"This is the second season that World MasterCard Fashion Week is under their direction. Let's see what they can do. I'm hoping for great things. I'm hoping for Anna Wintour and Grace Coddington in front-row seats someday soon. If anybody can work that magic, it's going to be them." 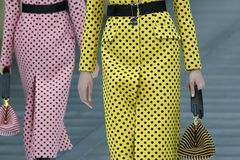 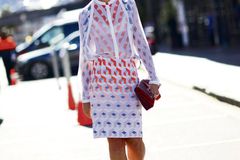